Home » Newsroom » Features » If others can do it, I can too
Back to Newsroom

If others can do it, I can too 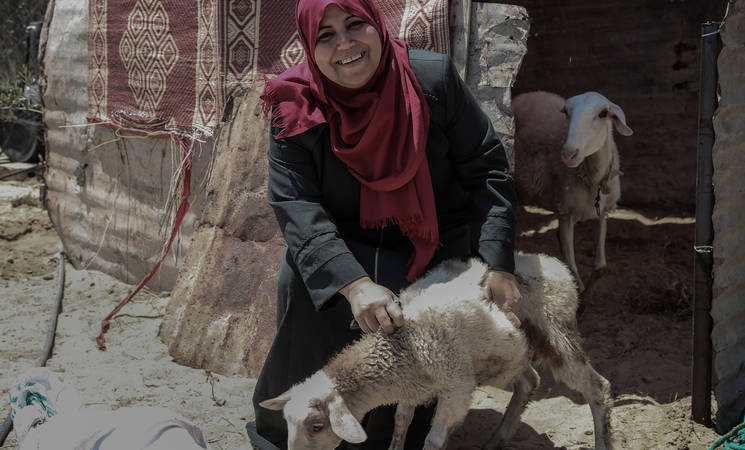 Against the backdrop of the dire socioeconomic situation in Gaza Strip and one of the highest unemployment rates in the world, finding a job in Gaza can be very daunting. According to the Palestinian Central Bureau of Statistics (PCBS), the overall unemployment rate in the first quarter of 2018 increased to 49.1 per cent from an average rate of 43.6 in 2017; women and youth face even higher unemployment rates. According to OCHA, poverty rates and food insecurity levels have increased to 53 per cent by the end of 2017, which means some 1.01 million people, including over 400,000 children are food insecure in Gaza. Female-headed households in Gaza are particularly vulnerable and at risk of marginalization, social stigmatization, poverty and food insecurity.

Forty seven year-old Fayza Lafi, a Palestine refugee widow and a mother of seven, lives in Rafah, southern Gaza City. Fayza, who lost her husband during the 2014 hostilities, has attended an UNRWA business training programme through the ‘Empowerment Programme for Female-Heads of Households’ project. This initiative is implemented by the UNRWA Gender Initiative in partnership with Aisha Association for Women and Child Protection. Together with seven community-based organizations across the Gaza Strip, UNRWA provides vocational training opportunities to marginalized groups.

“When my husband was killed during the 2014 war, I was lost. I didn’t know how to raise seven children by myself. How would I be able to provide for the family, including paying rent and education fees? To find a source of income, I applied to a number of jobs because I have a diploma in literature, but nothing worked out,” Fayza commented.

For a long time Fayza had dreamed of creating her own source of income, but she had no experience of starting and running a business. “When I heard about these business trainings from a friend, I thought, why not try something new?” After she attended the first session about planning and development, Fayza decided to enrol in the training programme, learning that the definition of clear goals are the foundation to a successful businesses. “I also learned about budgeting, marketing and saving,” she recounts.

Against all odds and with great determination, Fayza managed to start her own business in livestock trading a few months ago. “In addition to the vast knowledge I gained from the training course, I became stronger, and more self-confident. I started to believe that my dream to have my own business could come true. When the instructor presented success stories about other women who started their own businesses, I thought, ‘If they can do it, I can do it too’. I hope that my small business will grow and people in the street will point at me and say, ‘this is a successful businesswoman’,” Fayza adds proudly.

More specifically, the business training aims to build the skills of women with regard to self-development including communication skills, problem-solving, self-esteem, financial literacy, marketing and business development. Participants were made to think strategically as decision-makers. These skills are required to manage income while also encouraging innovation in resource utilization. The training programme is implemented over a three month period and includes sixty training hours.

The UNRWA Gender Initiative includes four main projects, namely: the Social and Recreational Spaces project aimed at providing women and girls with access to safe spaces outside their home to engage in social networking and recreational activities; the Young Women Leaders project, which aims to close the skills gap between graduate education and labour market requirements;  the Female Headed Household project, addresses the particular vulnerabilities experienced by women heads of households; and the gender-based violence awareness raising project aimed at equipping women, men and youth with the skills they need to address violence they experience at home.