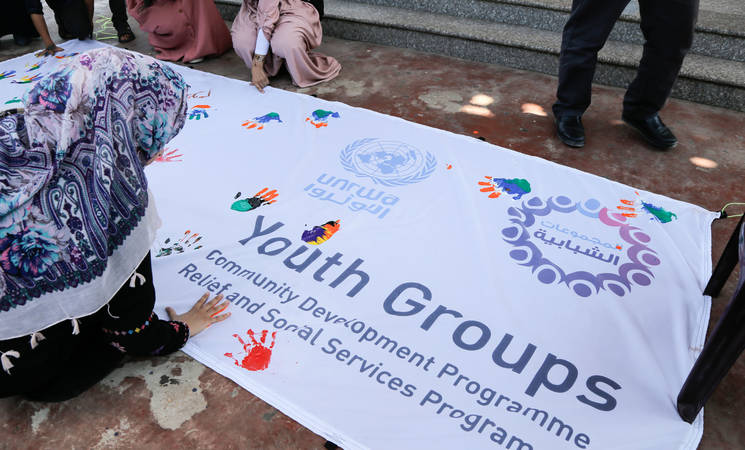 Every year, on 12 August, the world celebrates International Youth Day. This year’s theme, ‘Youth Building Peace’, is dedicated to celebrating young people’s contributions to conflict prevention and transformation, as well as inclusion, social justice and sustainable peace. The theme also emphasizes the 2030 Agenda for Sustainable Development Goals, especially the goal dedicated to improving the situation of young people and encouraging their active involvement in maintaining peace and security.

This international occasion is a unique opportunity to shed light on the ongoing commitment of UNRWA to empowering Palestine refugee youth. The blockade on Gaza – which entered its eleventh year in June 2017 – and repeated cycles of armed conflict have crippled the enclave’s economy and pushed a large part of the population into unemployment and poverty. This, however, didn’t stop Palestine refugee youth from making a lasting impact on their societies. Empowered with education, motivation and experience, they continue to set examples of innovation, persistence and courage.

A proper understanding of gender equality, tolerance and accepting others are instrumental elements in achieving peace. Building on the positive role the youth can play in building peace and their awareness of gender issues, the UNRWA Gender Initiative – with its community-based partner, the Youth Vision Society – has trained a group of 16 young women and men on debate and negotiation skills. The training culminated with a final debate held on 13 August to mark International Youth Day. Two teams debated whether or not there were sufficient efforts to promote gender equality in the Gaza Strip. The event brought together young community activists, giving them the opportunity to put what they have learned into practice and to help bring forth the voice of youth in Gaza. The activity also equipped youth with the skills they need to navigate their social life and economic opportunities, with a focus on communication, negotiation and debating skills.

Empowering youth to reach their potential and achieve their goals is key to building and sustaining peace, especially in light of the difficult socioeconomic and living conditions in the Gaza Strip. Against the backdrop of a collapsed economy and high unemployment rates, UNRWA continues to serve as a primary job provider in this poverty-scarred enclave. Through its Job Creation Programme (JCP), the Agency offers time-limited job opportunities to Palestine refugees in different skill categories. The JCP has proven to be one of the most effective means to provide livelihood opportunities to people in Gaza, including youth, and to support communities, inject cash into the local economy and stabilize struggling businesses. Not only does it provide a source of income, but it also restores dignity, self-respect and some level of self-reliance to thousands of Palestine refugees and their families each year. In the first five months of 2017, UNRWA has created job opportunities for 10,860 beneficiaries through the JCP, injecting US$ 7.68 million into the Gaza economy.

Earlier this year, UNRWA also provided about 2,420 short-term job opportunities to registered refugees through the Summer Fun Weeks (SFWs), which ran for three weeks in 125 locations across the Gaza Strip, offering a number of Gaza youth the much-needed opportunity to work temporarily and helping them restore their self-respect and feeling of value in society. With a particular focus on youth, the SFW positions varied from animators and clerks to technicians, cleaners and administrative staff. 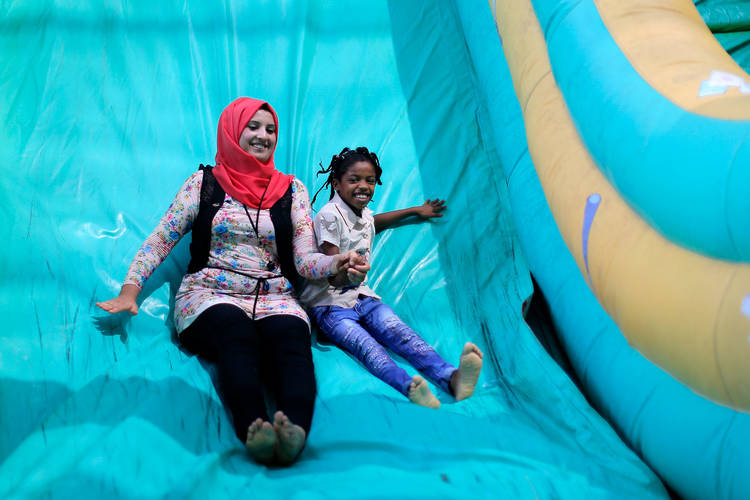 Twenty-eight-year-old Ayat al-Sawada, who worked as an animator for this year’s Summer Fun Weeks activities in Gaza, with one of the participating children. © 2017 UNRWA Photo by Rushdi al-Sarraj

Active youth participation in economic, civic and social spheres is a precondition for sustaining peace. To this end, and with the goal of developing their leadership skills and enhancing their self-reliance, the Japan Gaza Innovation Challenge initiative (JGIC), in partnership with UNRWA, announced the launch of the second Gaza Entrepreneur Challenge. The contest aimed to empower youth leaders in Gaza, foster their ability to create change through entrepreneurship and improve the means of livelihood in Gaza, particularly for young people. Contestants were required to develop a project for ‘life improvement’ in Gaza. As in the previous year, the two winning teams were rewarded a prize of US$ 5,000, along with technical support to start their business, as well as other opportunities. The initiative aligns well with the IYD theme this year as it focused on reinforcing youth engagement in making a difference in their communities. The ideas presented by 10 teams spanned various fields, including health care, nutrition, water management, recycling, agriculture, education and manufacturing.

The winning team of the Gaza Entrepreneurship Challenge hold the prize cup at the end of the final ceremony held at the Gaza Training Centre. © 2017 UNRWA Photo by Tamer Hamam

To provide youth affected by cyclical conflicts with a venue to debrief and promote peace in the community, the UNRWA relief and social services programme (RSSP) held a series of activities, starting from an awareness session and ending with an open day. In early August, the RSSP Community Development Programme organized an awareness session for 12 Palestine refugee youth on peace, non-violence, international law and human rights.

To give youth the lead in making a change in their communities and put what they learned into practice, the participants organized an open day for children in Sharm Park, an entertainment centre in Gaza. The recreational activities held on 10 August included face painting, mural drawing and games. The success of the event speaks to the critical role of youth as agents of change in the society.