Home » Newsroom » Features » Khuza’a in Ruins
Back to Newsroom 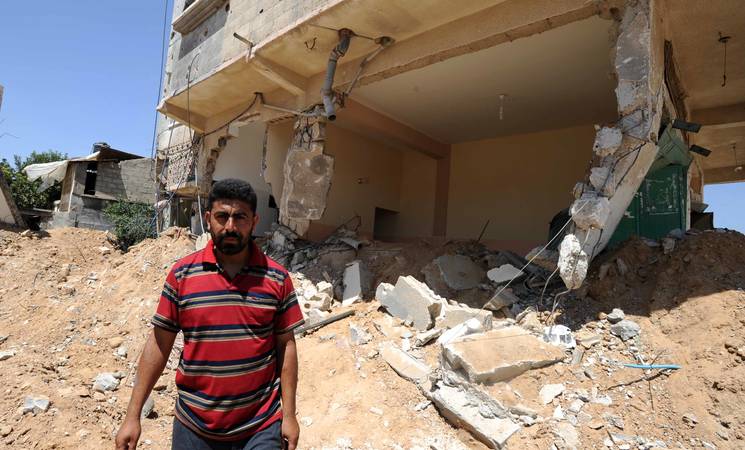 Since the escalation of hostilities, UNRWA has worked hard to provide a safe haven for up to 273,000 displaced. The Al-Najjar family from Khuza’a is one of them.

With its villas and palm fringed alleys, the tiny town of Khuza’a used to be one of the very few pleasant green locations in Gaza. Close to the fence with Israel, it was shelled and bombed to ruins over the course of the past five weeks.

Hussam Salem Al-Najjar is one of Khuza’a’s residents. He is married with six children, the eldest being twelve. Standing with his family in the midst of what is left of his home, he describes the days of shelling in Khuza’a. “For hours the bombing would not cease. My family and I gathered with 120 other relatives  in the house next to ours. We were terrified. The children were crying and trembling in fear. None of us believed we would survive."

Hussam feared the house would collapse and bury all. Wearing only the clothes on their backs and carrying makeshift white flags, the family ran through tiny alleys covered with rubble towards the home of Hussam’s father close to Khuza’a, which at the time already sheltered some 160 displaced. Hussam says that some of his relatives were killed on the way to their next refuge, but he and his family were lucky enough to survive. Three days later, when hostilities escalated in the neighborhood, all escaped again. They went in different directions, some seeking refuge with families and some in UNRWA schools.

After being trapped for four days in a home, Rawhia and Mona, also from the Al-Najjar family, finally arrived at an UNRWA shelter. The UNRWA schools, they say, are the only safe places in Gaza. With the fence surrounding Gaza effectively sealed, civilians do not have the option of fleeing as is usually possible in other humanitarian crises. This is especially true of the residents of Khuza’a, who lived just a couple hundred meters away from Israel.