Home » Newsroom » Features » Kicking the ball and taking care: Therapy through sport
Back to Newsroom

Kicking the ball and taking care: Therapy through sport 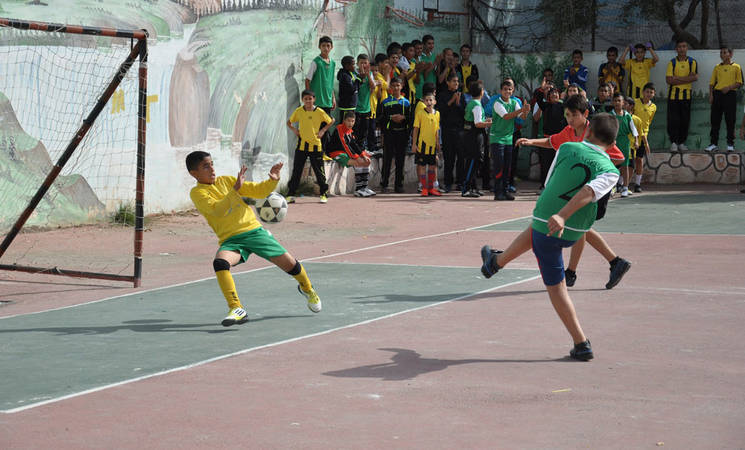 The drum beats a battle song as sweaty, energetic UNRWA students face off. The audience looks on, cheering and jumping to the beat, leaning over rails to catch a glimpse of the action. The audience is comprised of students, and the drummers, too, are kids; beating away to rhythmic folk music that is blasting from the speakers. Back on the field: a pass, a battle of footwork, a kick… Goal! The crowd explodes into cheers.

The effect of the second phase of the Kicking the Ball project can be measured by the cheers alone. The project, designed by the University of Berlin Office for Psychosocial Issues (OPSI) in collaboration with UNRWA, engages Palestine refugee students affected by trauma by combining sports and mental health support; helping children work through their experiences of violence and teaching nonviolent behavior.

Through football, students learn teamwork, discipline and communication.  But beyond the typical therapeutic­­­­ effects of exercise, Kicking the Ball is also quietly assisting with the equalization of gender norms.

As a plethora of televised teen dramas suggest, it isn't easy being a pre-teen girl – especially not in a typically conservative refugee society. Growing young women are often ill at ease with their bodies. Some girls, like 14-year-old Malak, can be shy and anxious, lacking confidence. But football has empowered Malak, a student Camp no. 1 Basic Girls School.

"After I joined the programme, I felt like I had the confidence to be a normal girl. I became so much more outgoing, when I used to have crippling anxiety about making friends. Being in this football team got me out of my comfort zone and forced me to overcome my anxiety by interacting with my teammates," Malak says.

With a lack of extracurricular activities and a dismissive societal outlook on females in sport, many girls like Malak didn't believe it was suitable to join a football league. But with encouragement from teachers, the young girls are becoming more comfortable with their bodies, healthier, and confident in themselves.

"I don't hesitate to say what I want now," says Malak. "If I want something, I ask. I want my voice to be heard. And, four years from now, I know I will still be playing football."

It’s not just girls who are benefiting from the Kicking the Ball programme.

Seventh grader Ibrahim explains how the programme often pits teams from different schools against each other. "We used to be more isolated. But now I feel like part of a larger community," he says. It's halftime and Ibrahim is drenched in sweat, fidgeting in his chair and eager to join his teammates back on the field at Camp no. 1 Basic Boys School. When asked why he joined the football league, his answer is simple: "To get better at football."

"We're learning a lot," Ibrahim elaborates. "We train in every gym class, and every Saturday. It also helps me focus on my classes."

Teacher Said Abu Diab explains the effects the programme is having on his students: "Ibrahim was always moving around, argumentative, late, and sometimes physical with other kids. Football has really helped him channel his energy." Kicking the Ball has also motivated students like Ibrahim to study harder, as retaining a position in the football team is not permissible with low grades.

Abu Diab continues: "We chose students for the leagues based on special needs: a difficult home situation, behavioral issues, etcetera. We taught them to get along and to behave like a team despite all of their differences."

The project ‘Kicking the Ball and Taking Care: Developing Sustainability and Ownership in Gaza and the West Bank’ is already active in 22 schools in the Nablus area in the West Bank. The use of football as a tool for psychosocial development has been successful due to the popularity of the sport in Palestine, and the lack of school-sanctioned extracurricular activities in the region. While Kicking the Ball does not assume a conflict resolution role, it does aim to contribute to survival structures within communities affected by the conflict.