Home » Newsroom » Features » Lebanon: looking from the outside in
Back to Newsroom

Lebanon: looking from the outside in 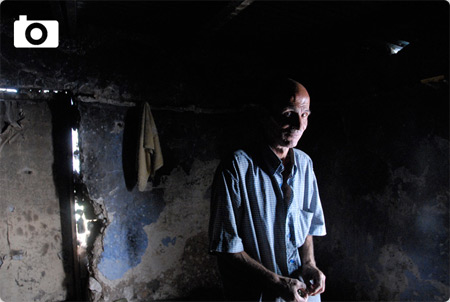 I have been living in the Middle East for over 20 years, most of the time working with Palestine refugees in the West Bank, sometimes with UNRWA, sometimes not. I have been to Jordan and Syria and the beaches of Taba, the Dead Sea and Tel Aviv, but I had not yet been to Lebanon. Having been transferred to work with UNRWA’s Public Information Office at headquarters two years ago, and therefore covering all of UNRWA’s five fields of operations, it was time to visit this enigmatic country of beauty and contradictions.

My brief was to photograph the refugee camps and its people. The refugees. Not an easy task when you only have three days to cover six camps. Trying to capture their soul, their essence will be tricky. In three days, all I will be is a spectator behind a lens, looking from the outside in, but it’s what I’ve been given and what I’ve got to work with.

I crossed into Lebanon from Syria and approached Beirut from the south, passing through a tightly packed neighbourhood presenting a cacophony of contrasting impressions in impossibly adjacent settings: a Maronite church on a street lined with political billboards; martyrs’ posters dating from this war or the other, hanging from lamp posts that divide lanes of Range Rovers, Mercedes and BMWs. The soundtrack is peppered by the sound of a squillion cheap mopeds, the air is heavy with late-summer Mediterranean heat framing giant billboards that host glitzy advertising campaigns for Lebanon’s francophone high-society: Beyrouth Souks!

Passing by the car window on the right is Shatila refugee camp.

A poster in English reads: “We will never forget”.

After some refreshments at UNRWA’s Field Office, I’m off to do my job: Shatila and Burj Barajneh camps. After some 20 years in Palestine, this is a totally different reality. We are a couple of kilometres from the shoreline, maybe three. As I photographed my way through the narrow alleyways, with barefoot kids and dripping laundry lines, I ask UNRWA’s camp services officer if the communities mix: “Do the refugees ever walk along the corniche?” With great patience, he responds that for these kids, the camps are their life, their universe. They know nothing else. Hoda, one of UNRWA’s public information officers in Lebanon, adds that these kids dream of one day seeing the sea.

As I smell the air heavy with salt, I tell myself: “Silly question”.

We walk past posters of Abu Ammar and Abu Jihad and I realise something: 1948 is everywhere. Every picture on the wall and every writing on the wall. Street names and school names. Ramallah school here, Lubbiya street over there. In Lebanon, the Palestine refugees are still Palestine refugees.

They are not at home away from home, nor have they blended in with their surroundings. They are actually still in Palestine with their hearts and souls and minds - and waiting to go back.

I take aim and shoot all over the place, looking for the human inspiration for our “Peace starts here” campaign. Hoping to find it around the next corner, always. Still looking. Maybe tomorrow in Nahr el-Bared or the next day in Tyre.

The following day I woke early to start my journey north. The billboards woke early, as well. Along the coastal road taking me to Tripoli and the destruction of Nahr el-Bared, I was greeted by Jack Daniels, Johnny Walker, Eva Longoria and, of course, Nancy Ajram. And then, my favourite of all: “Sushi is Yabani” in giant letters down the side of a building. You gotta love Lebanon.

In Tripoli I was a guest of the NMU – the UN’s Northern Monitoring Unit. I meet Maysoon, who is a young, budding photographer in our Communications Unit and Fadi who is a young refugee from Nahr el-Bared currently resident in Beddawi with excellent English, quick eyes and his ear to the phone. He’s our man in Nahr el-Bared.

In Nahr el-Bared, the seaside setting is absurdly beautiful; the destruction total.

The temporary shelters in the adjacent areas, built with generous donations from Japan, the European Union and the United Arab Emirates, to name a few, are surprisingly calm. Neat and orderly. Red hot peppers sprout on the ledges, planted in plastic bottles and thriving. Small convenience stores have sprung up here and there; women selling corn puffs, marshmallows and sticky sodas. The kids play soccer in the alley. Could it be that this is slightly better than Shatila?

In one of the shelters, I am met by the local ombdusman, so-to-speak. He thanks me personally and profusely for the German-donated solar panels providing hot water for the temporary shelters provided by the EU. “Every time I take a shower, I think of Germany!” he tells me happily.

On day three of my mission, we are heading south to Sidon and Tyre. I know these names from history books and imagine soldiers in full shining armour on panting horses.

I inquire with Ahmed, my trusted driver. As we pass by Sidon’s restored old city with cobblestone streets, vaulted arches and mini-citadels he corrects me,

“Of course, Monsieur, of course.”

A few twisted turns through the downtown area take us to UNRWA’s Area Office. I am equipped with a permit, an Icelandic operations support officer (OSO) and a Palestinian assistant OSO, and off we go to Ein El Hillweh camp.

Before entering, David the Icelander takes me for a quick mental reconnaissance through the camp, just in case. Ein El Hillweh is often in the news, after all.

In answer to my queries about the occasional clashes one hears so much about on radio these days, Imm Youssef, the gorgeous assistant OSO from the camp, says: “it generally doesn’t last for more than 2-3 hours and then all is back to normal.” Broad smile.

Once in the camp I am introduced to Abu Hisham, UNRWA’s camp manager for the last 33 years! Goodness. I guess he doesn’t sweat the small stuff anymore.

The UNRWA compound in the camp is cost-efficient and cookie cutter and I realise, with a slight panic, that the setting here is no different from any number of installations rolling off the UNRWA-design assembly line. Artistic inspiration is becoming more difficult to conjure up. But then, I am escorted to the Marj Ben Amer school donated by the EU and I am in for a surprise. It is a green school – as in “UNRWA is going Green” – in Ein El Hillweh. Plants, recycling, solar panels. Does UNRWA know this? Cool.

It seems that democratic pluralism is flourishing here. Election posters everywhere – and it’s only the second week of school. Last year the preparatory school girls lobbied for wider school uniforms to allow them to run and a PE teacher. She starts this week. Girls in American high schools should have so much power.

Note: Remember to tell our glamour girl OSO – she really IS beautiful – to follow up and write a story about the power of the people in Ein El Hillweh’s girls school.

Goodbye, goodbye and off to Tyre. I am to photograph shelter rehabilitation in Burj Shemali funded by the United Arab Emirates Red Crescent. Another Area Office and another OSO: Emily from Australia.

Infrastructure is always a challenge. Documentary photography can be boring. Uff. I need people, folks, people. And people we find. We walk through a placid camp and on to some short and stuffy palm trees. Are we still in the camp? Right now it feels like El Salvador.

We come to a clearing and arrive in the Stone Age. There is a structure, one stone atop of the other. A man lives here. Alone. His kitchen is a corner in the bushes. There are egg-shells on the floor. I don’t see a toilet.

He allows me to take his picture inside, doesn’t look at me, but steals a glance at the lens. The best photograph of the trip. I doubt it will change his circumstances.

Next we find Halimeh. Halimeh doesn’t remember her age, but she remembers Palestine. She was a young woman from near Safed in 1948, married with a daughter. We ask but she doesn’t like to talk. A neighbour who looks after Halimeh tells me she is nearly 100 years old. She lives in a one-room house her husband built in the early 1950s. She owns a very old wardrobe, a mattress on the floor, a walking stick, a fly-swat and the clothes on her back. She also has a daughter, but she isn’t there.

Halimeh qualifies for the shelter reconstruction programme. They will build her a new abode this year.

Note: Record this woman’s story on film - if not for UNRWA, for her descendents.

About the photographer: Isabel de la Cruz was born in Bonn, Germany where she lived until the age of 17. Following her university studies in the United States, she worked for NBC News in Cairo before working as a photo-editor for the European Press Agency in Frankfurt. During the first Gulf War in 1991, Isabel came to the West Bank to work with UNRWA as a refugee affairs officer and is currently working as a public information officer in UNRWA’s headquarters.