Home » Newsroom » Features » A life cut short: The story of an UNRWA student killed by the conflict in Syria
Back to Newsroom

A life cut short: The story of an UNRWA student killed by the conflict in Syria 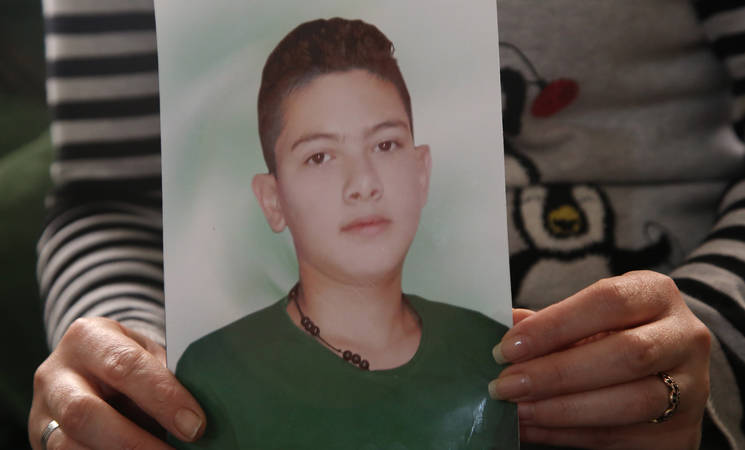 At just 14 years-old Baha’a Mohammed’s life was cut tragically short. He was forced to flee his home twice, his young life already scarred by the war in Syria. He had been forced to leave his home twice. His trauma didn’t end with displacement however. At the tender age of nine he was hit by a mortar shell, leading to the removal of part of his intestines. Baha’a had big dreams for the future and would not allow his injury to get in the way of his dreams of becoming an engineer or doctor. But all those dreams where cut short one bright February day in 2018, when a mortar landed nearby where Baha’a was walking home from school in Jaramana.  He is one of at least 32 UNRWA students in Syria who have been killed during the last eight years of conflict. Some 438,000 Palestine refugees remain in Syria as the conflict its eighth year. Many have been displaced at least once, with more than 126,000 classified as extremely vulnerable.

On that fateful day, Baha’a woke up early, ate his breakfast and spent the morning studying before leaving for school, the UNRWA al-Rameh al-Muhdatheh school where he attended the afternoon shift. “When school ended, I called him on his mobile to ask him not to take the main road because mortar attacks were happening daily in Damascus at the time. That was just two minutes before they were hit,” says his mother Fatmeh.  Baha’a was walking home with his cousin Qussay and three friends when a mortar landed near them. Qussay died instantly, Baha’a was rushed to hospital after shrapnel had penetrated his left leg, liver and kidney.  He needed immediate surgery to remove a kidney. The doctors felt he would survive this too, that he could live with one kidney. However he had lost too much blood and died during the procedure. “I was shell-shocked and numb. His life was lost in a matter of seconds,” his mother recalls as tears run down her cheeks. “Losing a son is always difficult, but this was just so completely unexpected!” she exclaimed.

Baha’a was a smart, caring boy, a parent’s dream, his mother recounts. “I have so many fond memories of him. His courage and resilience during the past six years of displacement was amazing,” his mother explains. Baha’a was nine years-old when the family fled Yarmouk refugee camp to Jaramana in search of safety. Five years now, the family lived in a rented apartment with 14 relatives.  During the summer holidays he worked in a tailor shop to support himself and his brothers. When Baha’a entered 9th grade, the family decided to move into their own home, hoping to create a more conducive environment for Baha’a’s studies. The results of the 9th grade exam in Syria determines which subjects you can study in university, and Baha’a had high hopes that he would be able to enter one of the two most competitive disciplines in the country: medicine or engineering.  Sadly, he was never able to take that exam.

Baha’a’s family is trying to move on, but memories of his loss are still fresh. “I remember his smell,” sighs his mother.  “I always go sit in his room to look at his books. The death and loss of a child is often called the ultimate tragedy. Nothing can be more devastating. Our pain cannot be measured. We keep dreaming that he is still alive and expect to see him walking through the door, or hear his voice,” she shares.

Baha’a is buried together with his cousin Qusay, in the same tomb as an uncle who also lost his life in the conflict. Her faith has offered her comfort. “Baha’a is in heaven now,” she says with a sigh. 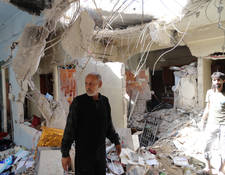 Yarmouk: A story of insufferable hardship 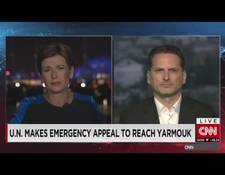