Home » Newsroom » Features » A life in exile
Back to Newsroom

A life in exile 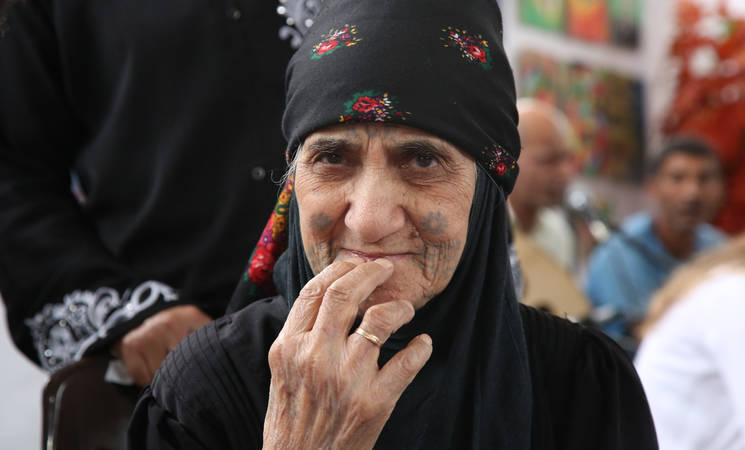 Khazneh Said is known as Um Qasem to all those around her. She lives in one of the modest shelters in Khan Dunoun camp in Rif Damascus. To reach the reception room of her house, a visitor has to avoid laundry lines laden with clothes of different colours.  Born in 1934 in al-Zwayeh, 23 km away from Safad in Palestine, Um Qasem believes it is not just the years that have left their mark, but also her difficult living conditions and displacement. But throughout her exile, UNRWA has been there to support her.

Um Qasem left for fear of the events that were happening in various parts of Palestine in 1948. It was her first exodus, the beginning of a life of indescribable pain, misery and injustice.  “God bless the good old days when we were in our home in al-Zwayeh in Palestine. We were happy. We had farms,” Um Qasem says.  Like all Palestine refugees who have lost both their home and livelihood as a result of the hostilities in Palestine, Um Qasem survived because of the close-knit nature of Palestinian community and thanks to UNRWA emergency food assistance.   With a big, heavy sigh Um Qasem says: “Our life was simple back then. We left with nothing but the clothes on our back. My village “al-Zwayeh” was occupied in May 1948 and was mostly known for its farms.  It was a small village with around 2,000 inhabitants.”

She was fourteen years old when she fled Palestine to Khyam al--Walid, a Palestinian village northeast of Safad, along the Syrian border. When they first fled, she was told they would stay away for only ten days; just until the situation would improve. “I will never forget the day I had to flee. I told myself it would be temporary- my flight from Palestine.” But her village was burned down. As the memories came back, a shadow falls over her weather-lined face. Um Qasem had to move to the Golan Heights in search of safety when the inhabitants of Khyam al-Walid fled the area in fear of military offensive in May 1948. In the Golan Heights, she worked on farms collecting cotton to earn money for her family.

After the Arab-Israeli war in June 1967 Um Qasem and her family decided to seek refuge in a safer place.  It was the start of a long journey, which ended in Khan Dunoun camp, where they found shelter in the ruined inn in the camp.  Later they built their own home and received UNRWA services including education, health and relief.   Recalling the old days, Um Qasem said: “We were part of that huge wave, a vast herd of human beings moving elsewhere.  It was the second exodus imposed on us, although we never harmed anyone.  My family and I left the Golan Heights in a truck heading towards Damascus, carrying with us our personal effects, mattresses, blankets and some kitchen utensils-all that we were able to carry.  Life was very hard in those days.  We struggled to make ends meet.”

Now 84, a mother of eight children, Um Qasem is the white-haired matriarch of a refugee family spanning three generations. She has more than 30 grandchildren, but even her relatives are unsure of the exact number. When the conflict in Syria started in 2011, UNRWA again was there to support the family, providing emergency food and cash assistance to help the family survive.

Resourceful and determined, Palestine refugee families have struggled over more than 70 years to keep up traditions, carve out lives for themselves and provide a better future for their children against tremendous odds.  Um Qasem’s only wish is to go to the occupied Ein el-Teeneh, in the Golan Heights, south-west Syria to be able to see and smell her homeland Palestine. “Where shall we find one day, a real home? Are we condemned to live in exile?” With tears in her eyes, Um Qasem said: “What we all hope for is that peace prevails and that the sun light is our way.  “Palestine is always in my thoughts. Palestine is the beauty, vineyards, orchards, orange groves and vegetable gardens.”