Loss and life of the still displaced in Gaza 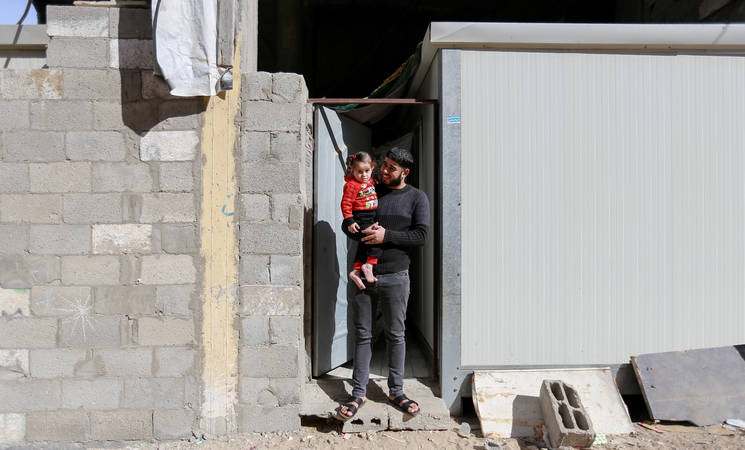 “Without UNRWA, the streets would be filled with homeless people.”

Between 7 July and 26 August 2014, the Gaza Strip experienced the deadliest and most devastating round of hostilities since the beginning of the Israeli occupation in 1967; more than two years on, most people and institutions are still struggling to cope with their immense losses. Besides the massive damage to the enclave’s infrastructure – including hospitals, water and electricity networks, and streets – some 12,500 housing units were totally destroyed and around 6,500 homes were severely damaged; over 19,000 housing units were rendered uninhabitable.

Around 70 per cent of the affected persons are Palestine refugees: a total of 142,071 Palestine refugee homes were impacted in the hostilities; 9,117 were totally destroyed and 5,417 suffered severe damage.

Besides payments for repair and reconstruction works, UNRWA provides displaced refugee families with quarterly rental subsidy payments. With this money, they can rent an alternative home while awaiting the reconstruction and repair of their houses.

All eligible refugee families received the third-quarter 2016 payments. Yet UNRWA is in critical need of US$ 5.5 million to provide families with the final payment for this year. Rental subsidy payments are a pivotal coping mechanism for the still displaced, and without this assistance, families risk spending the coming winter in damaged, half-repaired homes or will have to go deeply into debt to pay rent by themselves. Mohammad Saleh’s family home was totally destroyed during the 2014 conflict, which has left him and his nine family members displaced to this day. Only one month ago he received the first payment from UNRWA to start reconstruction works. “I have received rental subsidy payments from UNRWA since the day our home was destroyed. Yet due to the high and increasing rents, our family had to move four times to find an acceptable place. Really, we miss our home,” said the 63-year-old.

“Every day people tell me about the pain of losing a home; for them, it is like losing a life. When I see families rebuilding their houses, I feel proud, I feel relieved, I feel my work makes sense,” explained 28-year-old Abdallah Ghazal, the engineer from the UNRWA infrastructure and camp improvement programme who is working on Mohammad Saleh’s case. Shukri Ali’s birds were buried under the rubble when his house was totally damaged during the 2014 conflict. When he returned to his newly reconstructed home, he bought new ones. © 2016 UNRWA Photo by Rushdi al-Sarraj

Shukri Ali and his family were living in Shujaiya, eastern Gaza City, when the 2014 conflict started. Shujaiya was one of the most heavily affected areas of Gaza, and whole neighbourhoods were left severely damaged. Shukri’s house was totally destroyed, and for two years he and his family spent their time in a rented home with support from UNRWA. Just one week ago, they completed the reconstruction of their original house with payments from the Agency and moved back. Shukri explained, “I used to work as a labourer, but since the blockade was imposed, I can barely find work. If UNRWA did not pay us rental subsidies, we would not have known where to go and what to do. Now we are back home, and I feel just relieved. But I also see and can barely bear the sadness in the eyes of many of my relatives who are still waiting to rebuild and reconstruct their houses which they lost in the conflict.” One of the first things he did when he moved back home was to buy a new bird – he had lost his old ones when they were buried dead under the rubble of his home. “The destruction of our home also led to many other difficulties; for example, the home we are able to rent with UNRWA support was far away from our original neighbourhood [in Shujaiya], and therefore the children needed much more time to walk to their schools, as we cannot afford paying for their transportation. Because we had to move away from our neighbourhood, we also lost our social network and our friends,” explained Etimad al-Ejla, who just very recently was finally able to move back to her newly reconstructed house. “For more than two years, UNRWA supported us with rental subsidy payments. But still, at the end of every month, I felt fear and panic that maybe soon we would not able to pay the rent anymore and would end up on the street. I hope all families will soon be able to go back to their homes.” Saleh Swidan inside the container where he, his wife and their two children have lived for two years. © 2016 UNRWA Photo by Rushdi al-Sarraj

Saleh Swidan, his wife Esra, and their two children Eisa and Enas used to live in a house in eastern Gaza City. Yet with the conflict came also the destruction of their home, and since the summer of 2014, they have lived in a container, which is freezing cold in the winter and unbearably hot during the summer. All he, his wife and their two children now dream about is to have a real home. “A few days ago, it started raining in Gaza and immediately the roof of the container leaked and water entered. Every winter, we fear the storms and the heavy rains,” Saleh said. “Last winter, I used to move back and forth between my brother’s house and this container due to the weather conditions, particularly because of my two little children. This life is not a life, but still it is all we have.” Twenty-four-year-old Mohammad Ali in front of his mother Niema Ali’s (who requested not to be photographed) unfinished house in Shujaiya in eastern Gaza. © 2016 UNRWA Photo by Rushdi al-Sarraj

Widow Niema Ali and her five sons and daughters are currently living in a rented home in northern Gaza City with support from UNRWA. Niema is well aware of how dependent she and her family are on the Agency’s support: “If UNRWA stops helping us to pay our rent, my sons and daughters and I would simply have to move back to our unfinished home. It does not have windows or doors, and the winter is approaching, but what choice do we have really?”

Husein Abu-Al-Lil (middle) is having breakfast with his wife, Kulthoom, and their son in their rented home in the Zaitoun area in eastern Gaza City. © 2016 UNRWA Photo by Rushdi al-Sarraj

Husein Abu Al-Lil used to live in a three-storey building in eastern Gaza City together with his extended family. He used to rent out the ground floor of the building to shop owners. When his home was totally destroyed during the 2014 hostilities, he not only lost his house, but also his only source of income. Now he feels he lives on charity, and this feeling makes him uncomfortable. “Immediately after the ceasefire in August 2014, I returned to check on my house, but instead, I just found a pile of rubble,” recalled Husein. “All the money I had saved during my whole life was lost as well, somewhere underneath the stones, burned. So we lost everything, our home and our livelihoods.” He continued, “If UNRWA did not pay us rental subsidies, I would have to go deeply into debt to provide my family with a roof over their heads, and it would be much more awful. Yet every time towards the end of the month, I feel pressure and fear, and I ask myself: what if UNRWA will suddenly not be able to support us anymore? The streets would be filled with homeless people.” Kulthoom Baroud is baking bread together with her husband Husein in their rented home in the Zaitoun area in eastern Gaza City. © 2016 UNRWA Photo by Rushdi al-Sarraj

“Is it a human right to have a home? I don’t know. But I dream every day and night to be able to reconstruct and return to our place,” explained displaced refugee Kulthoom Baroud, the wife of Husein Abu Al-Lil (previous photo). “If UNRWA stopped the rental subsidy payments, we would probably have to go live in a tent. A rented home is nothing like your own home, but it keeps us warm and makes us feel that we are still human.”