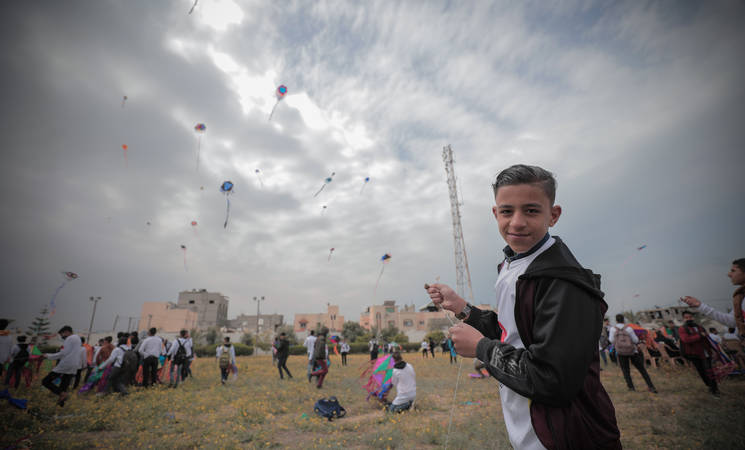 To commemorate the 11th anniversary of the Great East Japan Earthquake and Tsunami, Palestine refugee students at four UNRWA schools in Khan Younis, Gaza organized solidarity events to show their support for their fellow students in Japan. Over a period of four months, UNRWA schools organized activities including poetry, kite-making, music and art events. The four schools are part of the ‘Japan Neighborhood’ in Khan Younis, a collection of schools reconstructed through Japanese support.

Since 2012, some 1,000 students living in the Japan neighborhood in Khan Younis participated in a kite-flying event every March in solidarity with the people of Japan who were affected by the Great East Japan Earthquake and Tsunami on 11 March 2011. 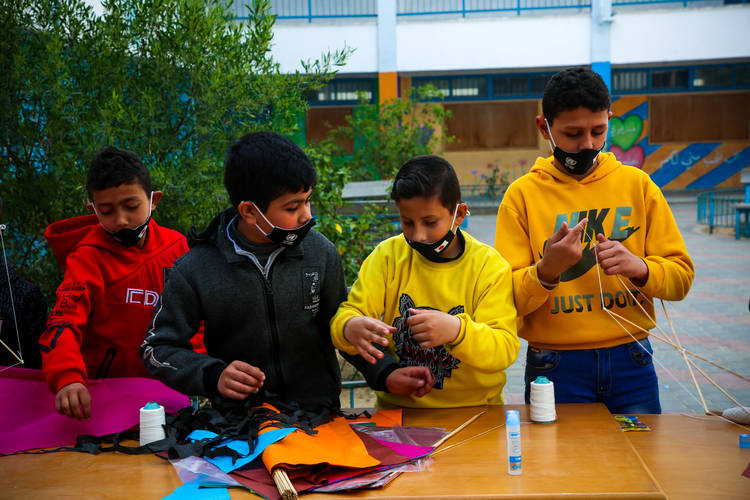 More than 2,000 Palestine refugee students at the Khan Younis Preparatory Boys’ School B and Khan Younis Elementary School took part in a kite-making event. Kite-making is symbolic in both Palestinian and Japanese culture and the students were able to show solidarity while exploring their creativity. Abdul Rahim El Sebakhi, a sixth-grade student, took part in the activity.  “This was my first time making a kite. I had so much fun, and I put my love and solidarity with the Japanese people into each piece of my kite,” Abdul Rahim said. 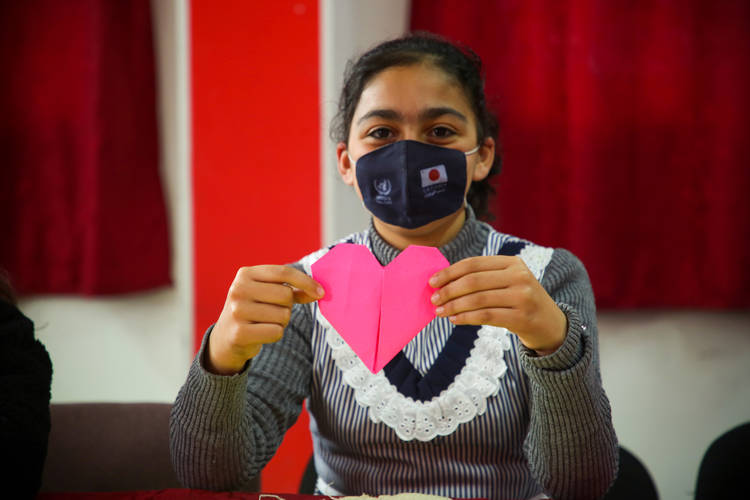 One of 125 students at the UNRWA Al Amal Girls’ School, Rozina Hamdan learned origami, a traditional Japanese art of paper folding. Rozina believes that every day is a new chance to learn something new, “The most beautiful thing about this Japanese art is the ability to create and invent new and beautiful things from a piece of paper. I will work on developing my skills more to make more shapes and to pass this culture on to those I know,” Rozina said. 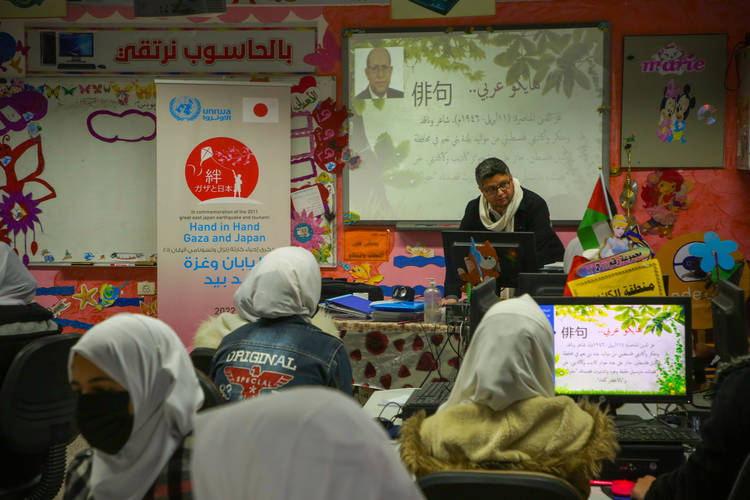 UNRWA students during Haiku session. © 2022 UNRWA Photo by Mahmoud Radwan
Twenty students from the new UNRWA Khan Younis Preparatory Girls’ School took part in solidarity haiku sessions. An iconic form of Japanese poetry, this exercise also highlighted the common value placed on poetry by Palestinian culture.  “Because one life is not enough, my writing is my other life,” wrote Lama Ramadan, an aspiring poet. “Learning about haiku has made me curious about Japanese culture. I hope to become a great poet with an attractive writing style and catchy diction,” Lama added. 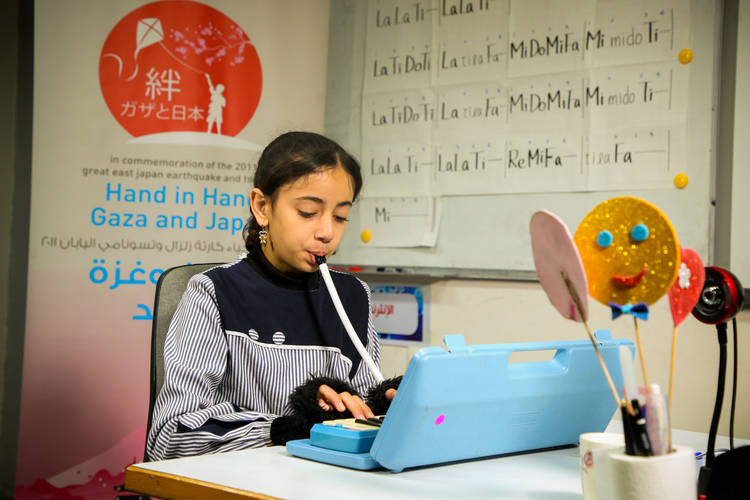 Using musical instruments donated by the people of Japan in tsunami-affected areas, students at the UNRWA Al Amal Preparatory Girls’ School learned how to play Japanese folk songs, including “Sakura, Sakura” by Japanese musician, Naomi Sato. Naomi even coached the students online! Bisan Kulab, is the leader of her school’s music group. A seventh-grade student and the leader of music group who participated in the music training the final event to play musical pieces. “When I started learning the piano and making progress, it felt as if a door of beauty had opened for me,” said Bisan. 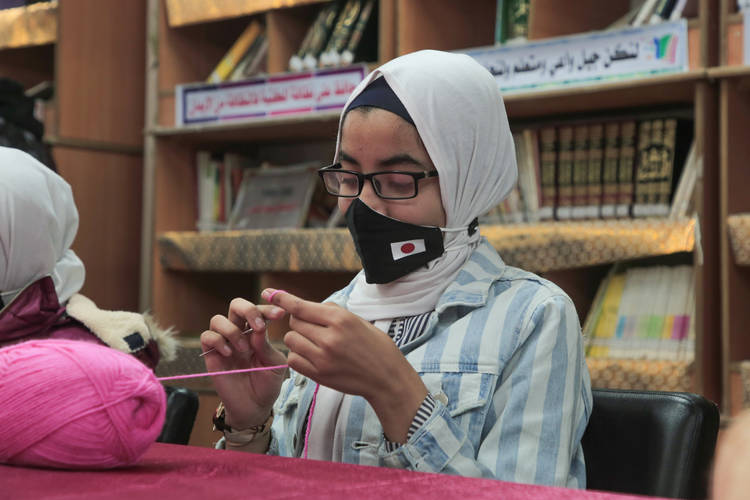 Reem Abu Hasna, one of the UNRWA students who participated in Amigurumi sessions © 2022 UNRWA Photo by Mahmoud Radwan

Amigurumi is the Japanese art of knitting or crocheting small, stuffed yarn creatures. Twenty-five Palestine refugee students participated in an amigurumi class. Two dolls made during the class were presented as a gift to the Representative Office of Japan to Palestine, as a symbol of cultural bonds between the two cultures. 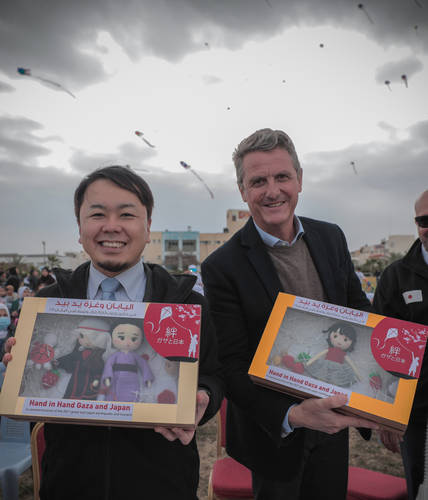 UNRWA is grateful for the continued support of Japan to Palestine refugees in Gaza. A supporter of the Agency since 1953, Japan funds UNRWA education, health, relief, including food and infrastructure services. Last year, Japan’s assistance to UNRWA exceeded US$ 50 million and has already contributed approximately US$ 15 million to date in 2022. The enduring support from the Government of Japan enables the Agency to provide vital services to Palestine refugees across the Middle East.