Moments of joy for children from Ein el Tal 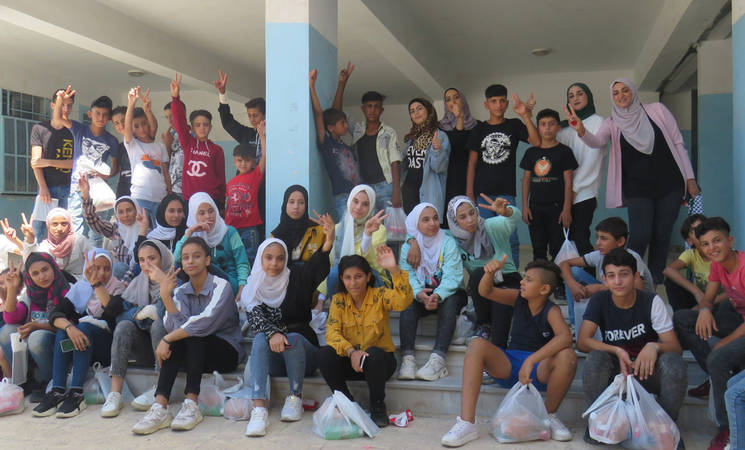 Last August was a special month for Palestine refugee children in Ein el Tal refugee camp, north-east of the Syrian city of Aleppo. Since returning to the camp in 2017, they have been spending their summers surrounded by  rubble. Ein el Tal, once home to 7,000 residents, is one of the most deeply impacted Palestine refugee camps in Syria. . Some 70 per cent of the camp was completely destroyed, with  remaining areas also partially damaged.

This year was different. During the entire month of August, UNRWA buses drove around 120 children to nearby Neirab camp, where UNRWA protection team staff, social workers and community volunteers organized a recreational summer club especially for them. Activities included games and sporting competitions, and awareness raising sessions, including on Explosive Remnants of War (ERW).

Explosive Remnants of War (ERW) continue to claim the lives of civilians around the world, including Palestine refugees in camps and areas impacted by the conflict in Syria.   The threat posed by the detonation of Improvised Explosive Devices (IED) also remain of concern.

Sadly, summer camp participants recalled the tragic events August 2021, ,  when one of their friends lost his life in an ERW explosion in the camp. The four other children who were injured in the same incident joined this year’s summer camp activities.

"I remember their fear and shock as if it was yesterday," says Haytham, an UNRWA social worker and one of the organizers of the summer camp. "It is such a relief to see smiles on their faces again. We can offer them a little bit or normality, a glimpse of childhood, even if their lives are impacted forever."

Fayez and Hussein, both seventh-grade students at the UNRWA Mikhael Kashour School in Aleppo, said that they think of the friend all the time. "We wish Mohammad could have been with us when we played football and water games. We felt safe, and we were happy," they said.

"I am extremely grateful that we could implement this summer club for the children of Ein el Tal camp, thanks to the combined efforts of UNRWA staff and community members. We all wish to do the same kinds of activities in Ein el Tal camp itself in the future, once our school is rehabilitated and welcoming children again," said Mirvat Abu Rashed, the UNRWA Chief of the North Area Office.

Thanks to generous donor contributions, UNRWA continues prioritizing Psychosocial Support (PSS) and ERW awareness-raising sessions, particularly for children who live in areas that were heavily affected by the conflict, including the Ein el Tal, Yarmouk and Dera'a Palestine refugee camps. As part of project ‘Support to Palestine refugees in Syria through health and protection services’, funded by the Government of Italy, some 26,350 Palestine refugees, including students, teachers and community members, will be exposed to much needed ERW awareness-raising sessions.