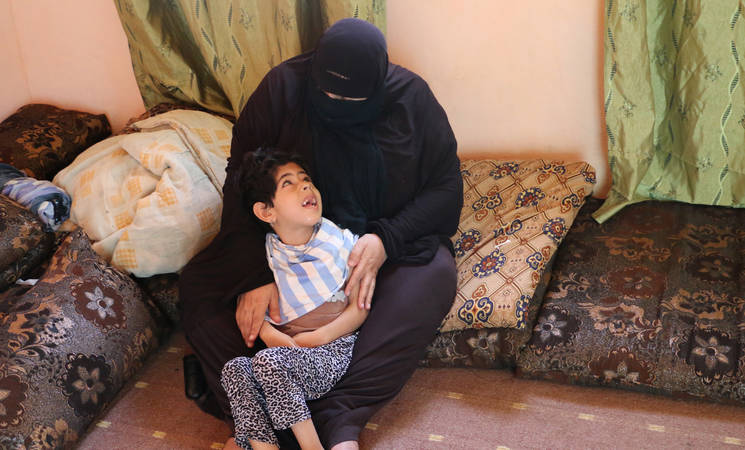 “This is my granddaughter, Sajida. I’ve been taking care of her since she was three months old,” explains Majda Ahmad Abdullah Al-Sayed, pointing out a small girl wearing a wide smile.  Placing the girl in her lap, she explains, “Her mother couldn’t take care of her properly due to her disabilities.”  Sitting on the couch of her small living room and surrounded by four of her grandchildren, she starts explaining the story of her life: “I’ve been here for 30 years. Call me Umm Jihad.”

Umm Jihad is a Palestine refugee from Syria married to an ex-Gazan and lives with her family in Jerash camp, one of the poorest Palestine refugee camps in Jordan. Most inhabitants in Jerash camp came to Jordan from Gaza after the 1967 hostilities and are known as ex-Gazans. Ex-Gazans do not possess full Jordanian nationality and are, thus, limited in their access to employment, education, and national aid programs within Jordan. To help mitigate their particular circumstance, UNRWA Jordan has developed a partnership with Cairo Amman Bank to extend microfinance loans to this group of Palestine refugees, specifically targeting women and youth. This microfinance initiative directed at ex-Gazans is part of the larger UNRWA microfinance programme, which in total awarded nearly 13,000 loans in Jordan last year alone, valued at over 10 million Jordanian Dinar (JD), or about US$ 14 million.[1]

Umm Jihad explains that taking care of a small child at her age is hard enough. Financial constraints make the situation even more challenging, which she describes while detailing the cost: “Sajida can only drink special milk which costs 8 JD. Her physiotherapy at the health centre costs 10 JD per month. Her treatments are very costly,” she says.  In addition to taking care of Sajida, Umm Jihad also supports one of her sons whose illness impacts his ability to care for his family of eight and one of her daughters whose husband cannot work due to mental illness.

Umm Jihad found out about the UNRWA microfinance programme by word-of-mouth and says she “saw a possibility to obtain financial support for a small business.” She applied for a loan in hopes of better supporting Sajida and improving her livelihood. Umm Jihad was granted three consecutive loans, her first loan was for 300 JD, the second for 400 JD and the most recent one for 500 JD.

Having noticed a large demand for diapers within the community, she developed a strategic business plan to cheaply buy diapers in bulk and then resell them. “I used to go to the market and see that many families were buying diapers for 10 JD and more. Now I started my own business. I buy the diapers in bulk and sell them to my neighbours for less than 1 JD.”

Thanks to her growing business, Umm Jihad has increased her monthly income, allowing her to meet her family’s financial needs. In this way, she not only gains a profit to support her family but also helps her neighbours and community members save money on their purchases. Umm Jihad concludes that she is thankful to UNRWA for helping her in a very difficult situation