Home » Newsroom » Features » Mutaz Gatasha: Using Creativity to Make Science Fun, The Story of an UNRWA Teacher who inspires imagination through learning
Back to Newsroom

Mutaz Gatasha: Using Creativity to Make Science Fun, The Story of an UNRWA Teacher who inspires imagination through learning 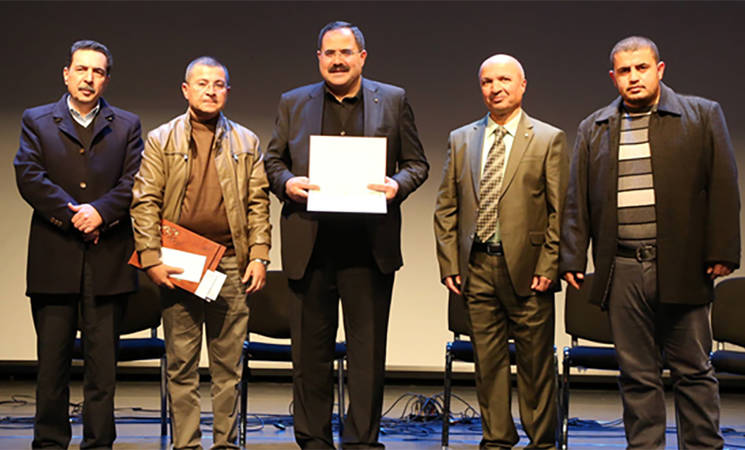 UNRWA teachers embrace the profound responsibility of educating the next generation of Palestine refugee youth with enthusiasm. This is the story of one such teacher, Mr. Mutaz Gatasha. Making the most of limited resources, Mr. Gatasha was able to inspire such an enthusiasm for science in his students that they reached the final round of the President Mahmoud Abbas Award of Creativity competition, representing UNRWA as one of 203 initiatives from across different educational institutions from the West Bank and Gaza. Mr. Gatasha’s initiative earned a winning honour, making him one of 63 teachers to present an awarded project.

“I received my university education from the UNRWA Faculty for Educational Science and I immediately found a job as a teacher in an UNRWA school. I was motivated to utilize my energy to serve my community. The school I worked was located in a rural environment where female students would often get married early. I started working to change that through educational empowerment. I was able to collect a large number of scientific stimulation programs and set up a library for my students. More than 30,000 programs have been catalogued within the school curriculum!” reflects Mr. Gatasha proudly.

He continues, “I motivated my female students to work in groups and teams to conduct scientific experiments inside the laboratory using simple and cheap materials that could be found locally or made at home. This kind of work had improved the educational performance of my students. I also encouraged them to get involved community educational projects, with the aim raising their awareness the challenges that face their communities.”

Now a teacher at the UNRWA Hebron Boys’ School since 2006, Mr. Gatasha has spent the last 13 years using technology to motivate his students by incentivizing creativity through projects and research challenges and uses science to push the boundaries of their imagination.

Qatar Fund for Development (QFFD) has just disbursed US$ 4 million to UNRWA in 2019. This first disbursement is one of four installments over a two year period and will support the Agency's core services, including education, health care, relief and social services, in all five fields of UNRWA operations. Through this multi-year agreement, signed on the sidelines of the Doha Forum 2018, QFFD will fund a total of US$ 16 million to the UNRWA core budget, enabling the Agency to provide vital life-saving services to Palestine refugees across the Middle East.