Home » Newsroom » Features » New Hope In Light of Harrowing Loss: How an UNRWA Teaching Post Provides an Income and Stability for a Palestine Refugee from Qabr Essit
Back to Newsroom

New Hope In Light of Harrowing Loss: How an UNRWA Teaching Post Provides an Income and Stability for a Palestine Refugee from Qabr Essit 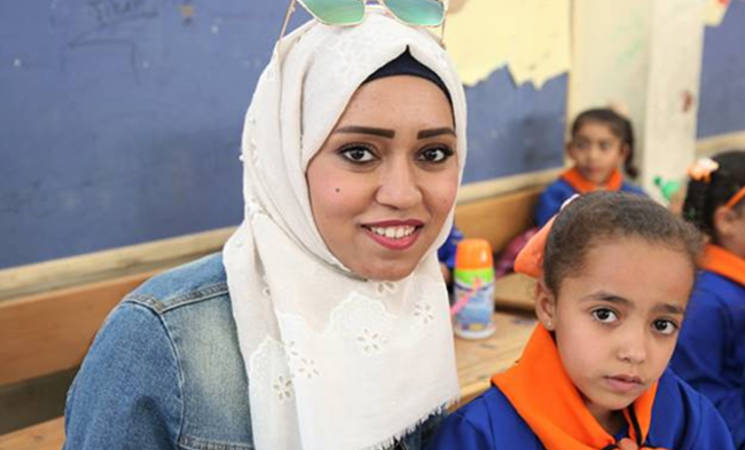 Zahra Ma’touq walks between the desks while 30 girls and boys look up at her adoringly. She bends over a desk to correct a notebook here, calmly walks over to answer a question there. Like her students, Zahra is a little nervous, and excited - his is her first day too. However, teaching at the Yarmouk school in Qabr Essit was also a homecoming. Zahra used to be a student here. “This was my classroom when I was in first grade,” she smiles. “When I came back I was flooded with memories!”

However, the school has changed since the days when Zahra was a first-grader. Yarmouk school is one of two schools destroyed and re-opened by UNRWA in Qabr Essit during the Syria war. In 2015, a booby trapped car exploded, reducing most of the building to rubble. It was rehabilitated and re-opened in 2016.

Zahra, too, has suffered due to the conflict in Syria. Although only 25, she is a war widow. Her husband was killed after only five months of marriage. Zahra was still studying and could not see any future. “After a year of sitting at home, I realized I needed to continue with my life,” she says.

While the conflict in Syria continues to affect UNRWA operations, with more than half of UNRWA schools inoperable due to damage incurred under the conflict, today UNRWA operates a total of 99 schools in Syria, including 48 government schools which are made available to UNRWA students in the afternoons, three rented premises and one donated building and educates a total of 48,000 Palestine refugee children. 5000 of them packed their backpacks for the very first time this year and headed to first grade, among them Zahra’s students.

Like their peers, these first graders can look forward to a very good education, in spite of the conflict around them. Although 60 per cent of Palestine refugees in Syria have been displaced at least once (meaning that many students have had to change schools), UNRWA students have shown remarkable resilience in the face of the traumas they have often witnessed. These children have returned to the school benches and looking towards the future. The Agency has been extremely successful at educating students throughout the war-torn conflict. Last year, Aya Abbas, an UNRWA student who was displaced from Yarmouk, achieved the highest marks in the 9th grade exams in the whole of Syria. She was just one of over 4,000 UNRWA students who sat for their 9th grade exams, with a pass rate of 81.79 per cent.

Keeping students in school gives students hope for the future. That is vital in a region as volatile as the Middle East. UNRWA schools provide a stabilizing influence and are a bulwark against violent extremism.

Reflecting on her choice, Zahra says that teaching provided her with a purpose. “Education teaches you how to deal with others and how to build your future,” she says, “It was the best decision I have ever taken - to finish my studies.”

Thanks to the generous support of the Qatar Fund for Development on behalf of the State of Qatar, UNRWA can continue to protect the right to education and learning for Palestinian children & teachers in Syria, while the Agency faces an unprecedented financial deficit.