Home » Newsroom » Features » No Borders on Hope: UNRWA Student from Gaza wins Messages of Peace Poetry Contest
Back to Newsroom 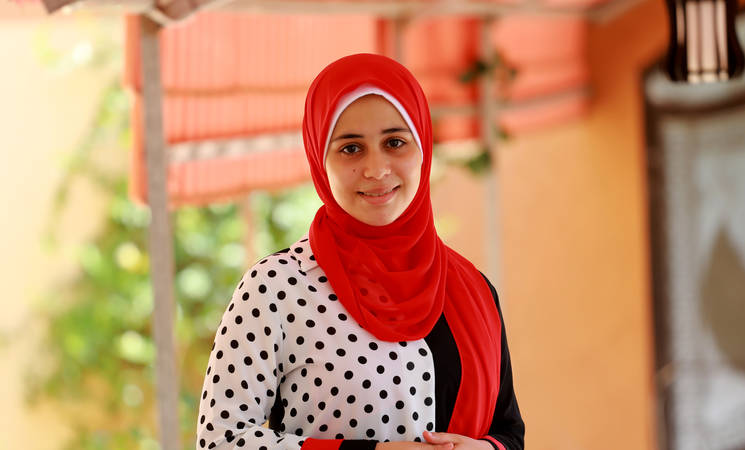 While I was trembling in fear last night,

You put your hand on my heart to make it all go away,

I woke up to find you, a tear in a refugee’s eye and a smile on a child’s face.

Thank you for your enlightenment.

For the misery of the world is gone.

Chosen from more than two thousand international contestants, Nagham Al-Yazji, 15, was just named a winner in the 2020 Inspirational Messages of Peace Contest by the United States National Park Service and International World Peace Rose Garden. The competition celebrates messages of peace written by youth from around the world.

Nagham’s poem “A Letter to Mother Coretta Scott King” was one of three poems selected to be engraved on a plaque and permanently placed in the University Park World Peace Rose Garden (UPWPRG) in Stockton, California. The Garden is one of six sister gardens to the Martin Luther King, Jr. “I Have a Dream” World Peace Rose Garden in Atlanta, Georgia. Nagham’s poem will also be featured in Dr. King’s Garden in Atlanta for one year! The “I Have a Dream” Garden lies across the street from the graves of Dr. King and Coretta Scott King. Nagham will be honored in a virtual ceremony soon and hopes that people from all across the world will be able to read her work once travel reopens after COVID-19 related closures.

“My teachers and school principal encouraged me to participate in the contest, but I never expected to be among the winners!” said Nagham. “I was shortlisted to as one of eight participants from Gaza and am so lucky to be the winner! I’m very proud that my words of peace have been heard and hope that this will raise awareness about the hopes and dreams of Palestine refugee children,” she said proudly.

“Although we can’t leave Gaza due to the blockade and the outbreak of the novel coronavirus, I’m very excited to celebrate my victory virtually. My hope for the future is that children all over the world will obtain basic human rights. These rights are simple and can be expressed in a single word: peace. Palestine refugee children want to live in peace,” reiterated Nagham.