Home » Newsroom » Features » Nowhere to go, Palestine refugees from Syria arrive in Gaza
Back to Newsroom

Nowhere to go, Palestine refugees from Syria arrive in Gaza

To mark the occasion of World Refugee Day, UNRWA is putting a spotlight on the situation of Palestine refugees in the Agency’s five fields of operation. The story below tells the story of a Palestine refugee family forced to flee the conflict in Syria and find refuge in Gaza, where the ongoing blockade and other factors make it extremely difficult to lead a normal life. 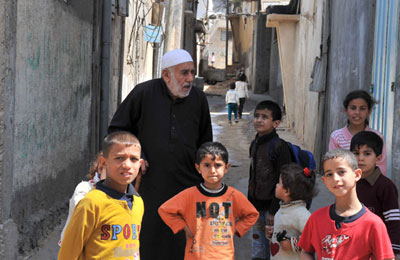 “I am struggling to make ends meet amid the difficult circumstances in Gaza. I was surprised by the high cost of living and the lack of jobs..” These are the words of Samir who is one of nearly 1,000 individuals reported to UNRWA as having fled the violence in Syria to look for refuge in the Gaza Strip.

Since the outbreak of violence in Syria, approximately 200 Palestine refugee families have arrived to the coastal enclave. The majority of the arrivals are descendants of parents and grandparents that were displaced from their cities and towns to Gaza in 1948, and displaced a second time, arriving in Syria after the 1967 Arab-Israeli war.

Several decades later, these families are suffering dispossession for a third time, causing them to flee Syria for Gaza, seeking the marginal improvement in security found there.

Despite funding shortfalls, UNRWA is committed to assisting these refugees. The Agency provides Palestine Refugees from Syria (PRS) with assistance equal to that of other Palestine refugee families in Gaza, providing them with education, health and relief and social services.

Many families have also received emergency non-food items such as blankets, mattresses, plastic sheeting. Additionally, PRS are currently being assessed for eligibility for food assistance, which is based on poverty, and for a one-time shelter assistance targeting PRS.

47-year-old Samir, the father of one family that has recently fled Syria for Gaza, said that although his living conditions in the Gaza Strip are extremely poor, his father’s story taught him resilience. His father was originally displaced in 1948 from Wadi Hasa village on the outskirts of Beersheva city in modern-day Israel. “He went to Gaza, then to Jordan, then he left us in Syria in 1970, and moved to Lebanon and lived there for a while and then went to Yemen and finally to Gaza where he passed away”, said Samir.

Financial obligations forced Samir to leave school and become a truck driver. Unfortunately, he lost his job as a result of the unrest in the Syria, which made him feel extremely insecure about the future of his family in the country, forcing him to flee to Gaza.

“I have to secure NIS 650 (approx. US$ 180) to stay in a house in Jabalia refugee camp, but I hardly make NIS 800 (approx. US$ 220) in my temporary job at the Ministry of Health”, explained Samir, describing a problem faced by many PRS who are now in Gaza. Samir’s family has moved multiple times since arriving to Gaza, due to the high cost of living.

Samir receives double food ration coupons provided to all abject poor in Gaza, in addition to other basic services from UNRWA.

Despite the gloomy outlook, Samir’s children represent a hope that only youth can provide. “My children were thrilled to learn that they were going to Gaza”.

Despite the hard conditions of life in Gaza and the struggles the family survived in Syria, Samir’s wife voiced a hopeful outlook that is rare among PRS in Gaza: “We were all looking forward to returning to Palestine. When I arrived in Gaza, I felt very content and thought to myself that this is the land of my parents and grandparents. Palestine is home.”