Home » Newsroom » Features » “The only thing that can change the future is education.”
Back to Newsroom

“The only thing that can change the future is education.” 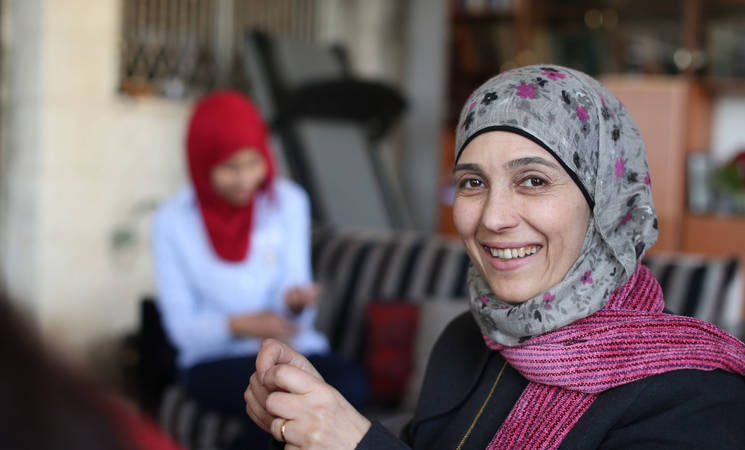 Hanan al-Hroub is a second-grade teacher at Samiha Khalil Secondary School, a governmental school in Ramallah. On 17 February, it was announced that she was one of the top ten finalists for the Global Teacher Prize. The annual competition, facilitated by the UK-based Varkey Foundation, is a US$ 1 million award presented every year to an exceptional teacher who has made an outstanding contribution to their profession.

The prize serves to recognize and celebrate the efforts of teachers around the world and the impact they have on their students and communities. This year, Hanan is the only teacher from the Middle East who has been shortlisted in the top ten.

Originally from Dheisheh refugee camp, located on the outskirts of Bethlehem in the occupied West Bank, Hanan explains that her life growing up in the camp was the main motivation to become a teacher: “It imbued me with the persistence and resilience I needed to face challenges. Being a child in a refugee camp is different from being a child anywhere else in the world,” she explains. “Children elsewhere can enjoy their childhood, but not Palestinian children. The games that we played were affected by the surrounding conditions. You grow up aware and informed about the politics and what’s happening around you.”

But her eyes light up when we ask her about her memories as a student at the UNRWA Elementary School for Girls in Dheisheh. “I never forgot the quality of my education there or my teachers,” she recalls. “UNRWA teachers are very distinguished. They provide students with high-quality teaching and inspire them.”

She continues: “My school was unlike other schools at the time. We had plenty of games and the girls from my school would participate in the sporting competitions that took place in our districts. We also had many activities that stimulated our minds, challenged us mentally.” But the library at her school seems to have left the deepest impression on Hanan: “I still remember the library. It was full of books. You couldn’t find a library like that at any other school.”

As a teacher, she speaks passionately about how education can be used to counteract the negative impact of the violence that Palestinian children – particularly those living in the camps – are frequently exposed to. “When I was a child, I was exposed to violence. Even today, my own children and my students still suffer from violence, and it affects their behaviour.” During the second intifada, Hanan’s husband, Omar, was injured after being shot by Israeli security forces. Her children, who witnessed the incident, were left in shock. “After that, I felt that they were suffering and isolated from the community,” she says. “They lacked confidence, and they were afraid to go to school for a while.” She believes that her children’s schools didn’t provide the psychosocial support they needed to deal with the trauma in the aftermath of their father’s injury, and it affected their performance in the classroom. The experience inspired Hanan – then a first-year student at Open Al-Quds University – to study elementary education so that she could help other children who had been exposed to violence to overcome the psychosocial effects and trauma that often follow. “If children who suffer from violence are not given the assistance and support they need, they will be lost,” she says.

Hanan’s inspiring approach to education centres on ‘Play and Learn’, whereby she integrates educational games into the classroom, often using tools and toys created from everyday household materials. She also emphasizes the importance of creating a ‘safe space’ for her students where they can learn in a peaceful, happy and comfortable environment.

“By playing these games with my students, I try to decrease the effect of violence among them, particularly those who themselves exhibit violent behaviour,” she says. “I try to change these behaviours – which often contribute to a lack of participation and focus – and replace them with confidence, dialogue and mutual respect.”
Hanan explains that she often tailors her teaching and games to meet the unique needs, skills and capacities of her students: “It’s important that the students understand that they all have a role to play in their future, even if their academic outcomes aren’t high.” She adds, “From the very beginning, I make sure that the students understand that in that classroom we are a family – we belong to each other. I feel as though I am very important to them.”
Her efforts have had a noticeable impact; today, her approach is widely replicated by her colleagues and has led to a decline in violent behaviour in schools where it is applied. She has shared her experiences at conferences and seminars and detailed the methodologies she uses in her book, We Play and Learn.

When asked how she feels about being shortlisted for the prestigious award, she smiles warmly. “For me, it shows that the world recognizes, believes in and respects this kind of approach to education. It also shows that Palestinian teachers can be creative, face challenges and compete despite the circumstances we live in.”

She adds: “The only thing that can change the future is education. Education can affect change and help us build the Palestinian community and state we want.”

Hanan al-Hroub was announced as the winner of the US$ 1 million 2016 Global Teacher Prize during the awards ceremony held in Dubai on Sunday, 13 March 2016. The announcement was made by Pope Francis in a video message broadcast at the event, which also featured tributes from UN Secretary-General Ban Ki-moon, Prince William, former US President Bill Clinton and Stephen Hawking. UNRWA congratulates Hanan on her inspiring achievements and celebrates the remarkable contributions that teachers like her make every day in Palestine and around the world. 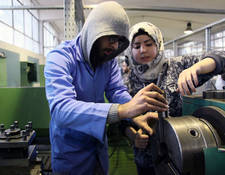