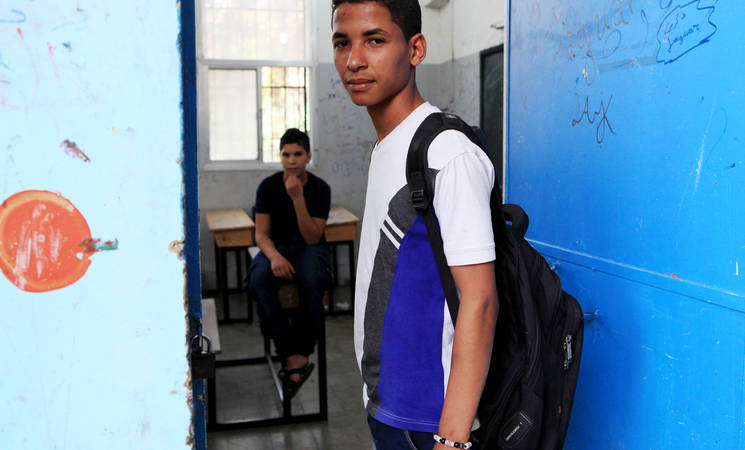 "I can’t believe I am in Damascus again. I have not been here for five years,” says 15-year-old Lara al-Tahan. “As our bus got closer to the city, my heart was beating fast and my nerves were tense.”

Lara is among the 297 students from Yarmouk and Lebanon who, on 11 May, headed to the Alliance Quarter in Damascus. The students, who are provided with room and board, are attending the UNRWA support classes running throughout the duration of the ninth-grade national exam from 14 through 25 May.

Lara describes the mood on the bus as “buzzing with excitement and tension.” The students were thrilled to be exiting the violent suburbs of south-eastern Damascus while feeling nervous about the upcoming exam. Passing the national exam is a must for any student wishing to fulfil their high school studies in Syria, but more than six years of war has not made these students’ task any easier.

Entering the city, Lara took a few photos of the streets they drove past. Lara, like Mohammad, is among the thousands of refugee children in Syria growing up in a brutal conflict. In the last four years, she and her family have moved several times. At the age of 11, she fled the violence in Sbeineh with her family for shelter in Yarmouk; when the situation in Yarmouk turned for the worst, they moved again to the adjacent area of Babila.
"We have escaped shelling, experienced destruction, and suffered loss through displacement from Sbeineh and Yarmouk," says Lara. Life in Babilla is stressful and each day feels the same. “It isn’t safe to go out. I usually play with my brothers and sisters, do my homework, study and sleep,” she explains.

Education not only provides refugee children who have suffered prolonged displacement with a feeling of continuity and stability, but also allows for hope for a brighter future. UNRWA provides 52,000 Palestine refugees students from Syria with free education in Syria, Lebanon and Jordan, thanks to the Agency’s generous donors. Lara says passing the ninth grade exam will help her fulfil her wish to continue her education to become a surgeon.

“Studying makes me feel less stressed and helps me do well in my classes. I don’t think the exam will be too hard,” says Lara. Lara may be among the few to boast of academic success, yet she is one of the many who are determined to make it through school in spite of the conflict.

Mohammad Suleiman, originally from Yarmouk, is 18 years old. “Education is the only way to build our future and our community,” he says. “I am determined to continue my education to become a doctor." Mohammad attended the UNRWA al-Jarmaq school in Yarmouk before he was displaced to neighboring Yalda in April 2016 when the area became further embroiled in conflict. “I loved my school in Yarmouk,  and I miss going to class and seeing my friends,” he says.

The conflict has forced Mohammad to lose two years of school. Having repeated the ninth grade, Mohammad is sitting for the exam for a second time. Last year, 53 per cent of students from Yarmouk passed their exam. "Our lives have been shaped by violence, fear and displacement. The siege severely impacted us and imposed psychological strain on all families in Yarmouk. We had to eat local herbs boiled with spices," says Mohammad.

Now in Damascus, he realizes the toll the conflict has taken on him: “Friends from Yarmouk whom I hadn’t seen in five years came to visit me here. I didn’t recognize some of them – it had been such a long time since I last saw them,” he explains.  In addition to providing academic support to students preparing for their exams, UNRWA also provides youth with some respite from the conflict. “I feel more secure in Damascus,” says Mohammad.

Since 2013, and in coordination with the General Authority for Palestine Arab Refugees, UNRWA has been supporting the likes of Lara and Mohammad. To help students sit for their exams, UNRWA provides room and board to teens returning from Lebanon and arriving from hard-to-reach and besieged areas within Syria. In addition to attending catch-up classes and study sessions, students receive counselling, partake in recreational activities and are provided with hygiene kits, a set of new clothes and a stipend of approximately US$ 10.

This year, as the students complete their exams just days before Ramadan, the Agency wishes all ninth-grade students’ success in reaching their goal to continue their secondary education.