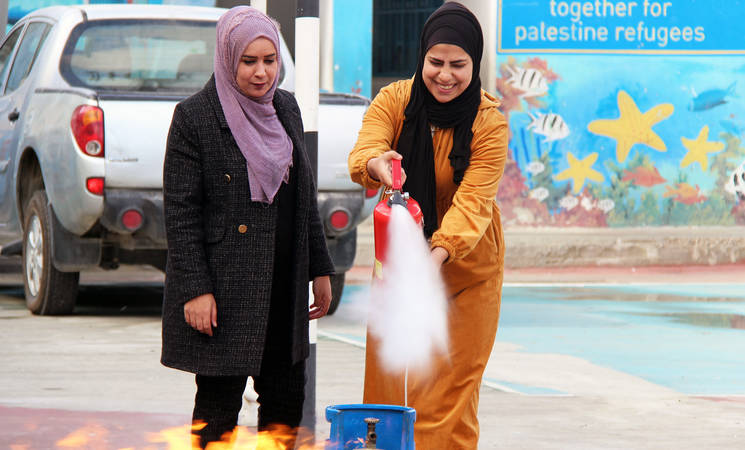 “We are exposed to attacks by settlers and the (Israeli) occupation forces almost every day. Even if we call an ambulance, it may be delayed due to the Israeli checkpoints and sometimes it may not arrive at all.” Bara’a Matariyyeh, is one of 33 women from the Wadi al-Hussein neighbourhood in the southern West Bank city of Hebron in the area known as H2[1] who showed up to a course in Emergency Preparedness. Here, they learned how to put out fires and the basics of First Aid in order to protect their families when they are on their own.

There are 10 Palestinian refugee families registered with UNRWA living in Wadi al-Hussein, including Bara’a’s family.  The area has been subject to repeated attacks by settlers and the harassment rose considerably during the conflict in Gaza in May 2021. Access to services is limited here, including emergency services, leaving the community extremely vulnerable to emergencies related to armed conflict.

As Bara’a can attest to, the threat is very real: “A while ago, some of the homes in our neighbourhood caught fire [due to settler violence]. It was a big fire. They called the fire department, but they were delayed due to the checkpoints. If we had taken this course before, we would have known how to deal with this problem. Now we know how to deal with fires.”

Under the umbrella of Protection of Palestine Refugees Victims of Armed Conflict and Forced Displacement project -  co-funded by EU Humanitarian Aid and the UNRWA Emergency Flash Appeal for the occupied Palestinian Territory (oPt) -  UNRWA provides a host of services for families and individuals impacted by protection threats. The Emergency Preparedness training for the Wadi al-Hussein community which Bara’a and her neighbours attended is part of a series of similar trainings that were carried out between October and December 2021 in partnership with the Palestinian Authority’s Civil Defense in communities facing life-threatening emergencies throughout the West Bank, including East Jerusalem, mainly as a result of settler violence. 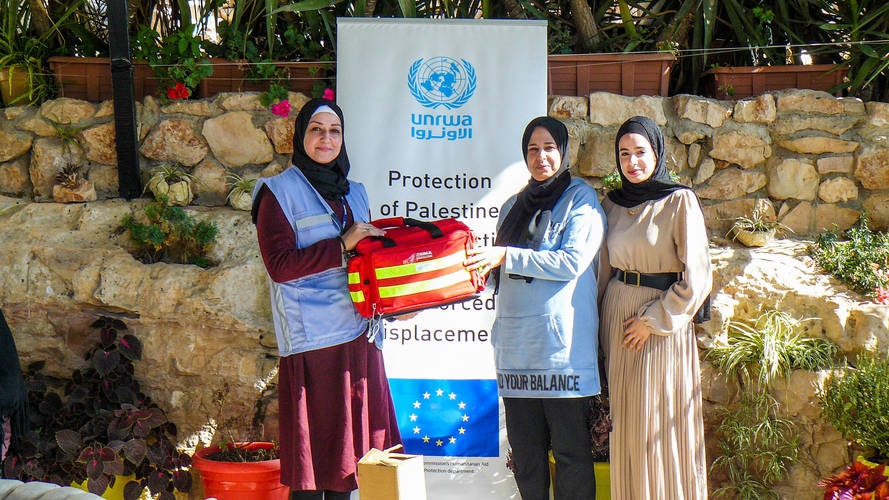 The women were trained on proper handling of gas cylinders, fire-safety (especially in the kitchen) and basic first aid instruction, including CPR, treatment of burns and stabilization of fractures. In addition to the training, all households also received First Aid Kits and a fire extinguisher as part of the programme.

Thanks to the course, Bara’a feels empowered to deal with any eventuality that occurs in her neighbourhood as a result of settler violence: “If we are suddenly exposed to any event, we have learned how to deal with first aid and firefighting.   The Civil Defense will certainly be delayed due to checkpoints, so now we learned how to deal with it [ourselves].” She adds, “Even though the first aid training was basic, it is helpful as we face so many attacks by settler and the (Israeli) army on an almost daily basis.”

In a report released by the United Nations Office for Coordination of Humanitarian Affairs (OCHA) in early November of last year, already in the first 10 months of 2021, there have been 410 attacks by settlers against Palestinians (302 against property and 108 against individuals).  As of 10 November 2021, four Palestinians were killed by settlers. In 2020, there was a total of 358 recorded attacks. In 2019, there were 335 such attacks.[2] As mentioned in the report, these settler attacks are primarily directed against rural Palestinian families living on small farms or in villages and towns in the occupied West Bank located in close proximity to Israeli settlements, like the Wadi al-Hussein neighbourhood.