Home » Newsroom » Features » Palestine refugees in Syria: a tale of devastation and courage
Back to Newsroom

Palestine refugees in Syria: a tale of devastation and courage 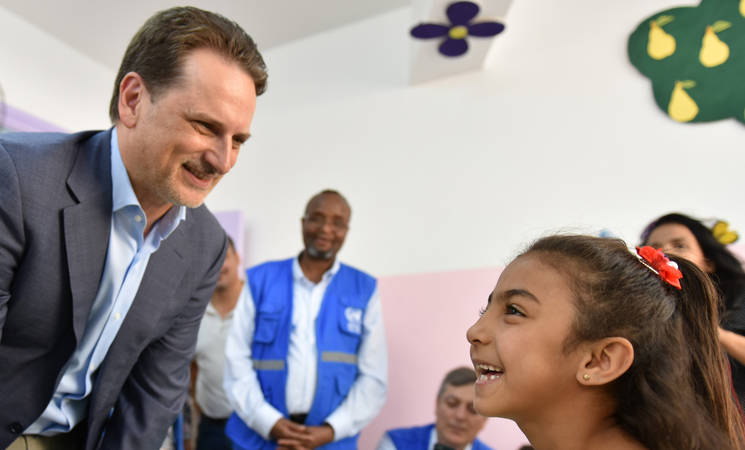 When last visiting the Yarmouk refugee camp, in Damascus, I was confronted with a scale of devastation unlike anything I had witnessed before in almost three decades of work in war zones around the world.

Standing in these fields of ruin, I saw signs everywhere of the appalling human cost of an unforgiving conflict, which has torn apart the lives of millions of Syrians. I was also reminded of what makes the tragedy of Palestine refugees in Syria so particularly unique.

Young Palestinians growing up in Yarmouk before the war would have spent the first years of their life trying to come to grips with their family’s history and the stories of exodus from cities whose names they know but whose features they have never seen. They would listen to the memories of their parents and grand-parents and long for a just solution to their plight.

They would also be acutely aware that, in pre-war Syria, their parents had the dignity of being employed or running their own businesses, in other words of being largely self-sufficient and covering their needs independently. They would send their children to UNRWA schools and use our health centers, but otherwise not require any relief or emergency services.

When the conflict began and fighting engulfed several of the neighborhoods in the which Palestine refugees had lived for decades, they became yet another generation of Palestinians to endure the trauma of displacement and dispossession. To the stories of their families in 1948 and 1967, the younger Palestine refugees would now add their own dramatic accounts of loss of relatives, friends, neighbors, homes and livelihoods.

Of the 160’000 Palestine refugees who lived in Yarmouk in 2011, only some eight thousand were still present in the camp in the last months of battle for its control in 2018. So proud were they of what they had built and so marked by what was no longer there, that Palestine refugees would refer to Yarmouk as “our little Palestine”.

The Syrian conflict has impacted Palestine refugees elsewhere in Syria as well. There used to be 560’000 countrywide, mainly in Aleppo, Homs, Hama, Latakia, Damascus and Dera’a. Today, some 440,000 Palestine refugees remain, more than half of them are internally displaced, and nearly all require sustained humanitarian assistance. Roughly 120,000 Palestine refugees have fled Syria since 2011 to Lebanon and Jordan, but also Turkey and beyond. In Syria, UNRWA has maintained its services wherever possible amid the horrors of war, adapting to the constantly changing nature of the conflict. The courage and dedication shown by our staff, who kept schools and clinics  open throughout the most critical phases, came at a high price, with 18 UNRWA colleagues killed and some 28 missing since the conflict began.

Remarkably, it the midst of devastation, there are also the most extraordinary stories of survival and achievement. In 2018, a young 9th grader in UNRWA schools, Aya Abbas, was the highest performing student in national exams across Syria. Aya was born in Yarmouk and had to flee the camp at a young age with her family. Despite the immense adversity, she persevered, studied hard and succeeded remarkably.

In many ways, her story is the story of Palestine refugees: often confronted with individual and collective suffering on a grand scale and yet, never prepared to give up. She also exemplifies the attachment of Palestine refugees to education, a field in which they continue to excel and inspire.

Throughout the conflict in Syria, UNRWA has shown steadfastness of its own and our commitment has been strong to preserving education in time of great emergency. When schools could not be reached, we distributed self-learning materials or broadcasted education programs from a TV station in Gaza.

Even when UNRWA faced the worst financial crisis in its proud history last year, we were determined not to leave Palestine refugee students in Syria behind. When, with the outstanding support of our partners and donors, we opened the school year on time for 50’000 boys and girls in September 2018, it was a moment of genuine celebration.

In Yarmouk today, as in other camps in Syria, Palestine refugees long to gradually return to their homes as they once knew them. Amidst the discussions about the safe and voluntary return of refugees to Syria, UNRWA will consider rebuilding or rehabilitating its schools, health-centers and other installations in Yarmouk, for all of them have been either totally destroyed or severely damaged by the fighting. We have done so successfully in other camps and will explore every opportunity to improve the lives of the community so deeply affected by conflict.

We owe it to Aya and so many others. We simply cannot give up.