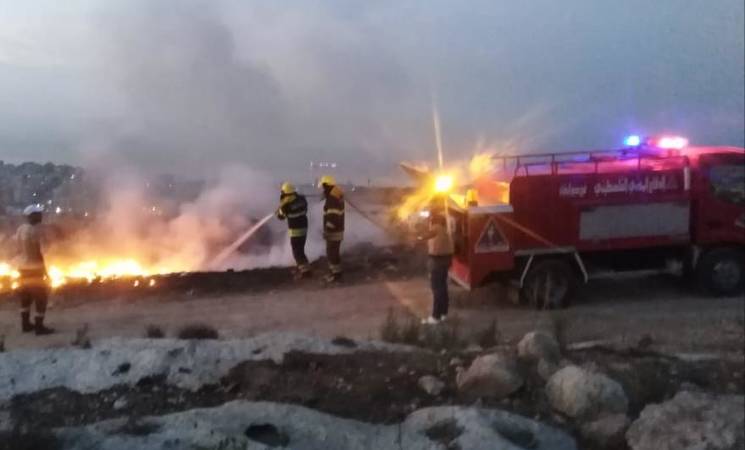 The 104 fires that engulfed the tiny country all at once in mid-October 2019 are described as the worst in decades. Blazes that spread quickly in different parts of Lebanon, including in Meshref and Damour areas close to Saida in the south, forced some residents of highly populated residential areas to flee their homes and villages and left the Lebanese Civil Defense, the Red Cross and other rescue teams completely overwhelmed.

Like Anas, many Palestinian volunteer firefighters, as well as the Palestinian Red Crescent Society, rushed from Palestine refugee camps to areas affected by the wild forest fires to assist Lebanese firefighters battle the massive wildfires that raged across southern, central and northern Lebanon. In Ein El Hilweh and in other camps near Saida, many Palestine refugees offered their homes to host Lebanese families that were fleeing the fires.

“We have been living in this country for more than 70 years. We feel a sense of belonging and commitment towards it. When I reached one of the areas affected by fire, I felt I had an exceptional courage to put out the flames, along with the Lebanese civil defense and the army,” said Anas and added, “As a Palestine refugee in Lebanon, I feel that I have to give back to a country that has been hosting us for more than 70 years. It’s a duty and an obligation on us, the Palestinians.”

Anas, together with twenty-three young Palestine refugees from the Beddawi Civil Defense team and tens from other camps, including Ein El Hilweh, Bourj Shemali and Nahr el-Bared, participated in putting out the blazes that claimed the life of one Lebanese volunteer firefighter.

Anas explains that his crew began its work in 2016 because Lebanese Civil Defense do not enter Palestine refugee camps. This prompted Palestine refugees to establish their own civil defense. “the idea to form a civil defense for the camps came from a need for personnel and equipment to respond properly in cases of fires and emergencies,” he says ”Previously, whenever there was a fire, camp inhabitants gathered and extinguished fires using buckets of water.” Palestinian volunteers of the Palestine Civil Defense team receive training in the fire evacuation process, search and rescue, putting out fires and first aid. Anas, who works as painter, is proud: “Some Lebanese almost couldn’t believe their eyes when they saw Palestinian firefighters taking part in the joint effort. In spite of all the difficulties and bad living conditions and all restrictions on the enjoyment of our full rights, we are always there to defend this country and make sure that our brothers in Lebanon live peacefully and safely. This is an expression of solidarity with our Lebanese brethren.”

Mohammed Al Meamary, a Lebanese from Beddawi area adjacent to the refugee camp, said about the participation of the Palestinian Civil Defense in firefighting efforts, “We, as Lebanese, appreciate and commend this work done by the Palestinian Civil Defense. It shows how much Palestinian refugees care about Lebanon and its people. It reflects their readiness to defend Lebanon against any harm and it also shows the bond of solidarity that binds us.  This action completely changes the negative perception of Palestine refugees in Lebanon.”

There currently 475,057* Palestine refugees registered with UNRWA in Lebanon, most of whom came to the country in waves in 1948 and 1967. They live in 12 camps throughout the country and receive UNRWA services, such as education, health care and relief and social services.  Beddawi camp, located near Tripoli in the north, is one of the twelve refugee camps, with over 21,000 UNRWA-registered refugees*. The camp population increased following the destruction of nearby Nahr el Bared camp and the flight of Palestine refugees from there to Beddawi.

*This figure does not claim to represent the actual number present in the country, as for example, Palestine refugees may have left over the years and UNRWA does not track the habitual movement of refugees out of its fields of operation.

The UNRWA Medical Hardship Fund at work in Lebanon
An open letter from the Acting Commissioner-General of UNRWA to the Palestine refugee community
EU Healthy Kids promotes positive, healthy habits in Lebanon
Taking on the world: Palestine Refugee Students in Lebanon Receive International Recognition
Lebanon: UNRWA Humanitarian Snapshot, November & December, 2019
A Journey Into the Lives of Palestinian Refugees from Syria in Lebanon
Youth Strategic Framework for Palestine Refugees in Lebanon