Pictures speak up for Palestine refugees in Jordan 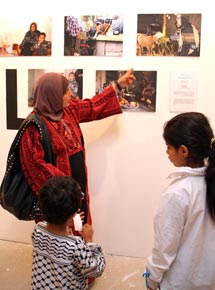 Thirty photos documenting the lives of six Palestine refugees from across the Middle East have been on display at Zara Gallery in Amman, Jordan, earlier this month.

The collection showcases the winning entries from UNRWA’s first ever photography competition. The contest, generously supported by the European Union, gave young Palestinian photographers the chance to speak about their lives.

“These are only five pictures, out of millions of untold stories,” said Bilal Al-Talawi from Khan Younis, Gaza, who received an honourable mention.

Nearly 100 Palestine refugees living in the Agency’s five areas of operation submitted a series of five photos. Each set tells a story about their lives as refugees.

“There is a story to each photograph. Wandering with my camera through Gaza’s alleyways, I document the suffering of the Palestinian people. With my pictures I try to show this suffering to the world,” said Wisam Salameh from Gaza, who also achieved an honourable mention.

At the exhibition’s opening ceremony on 10 July, two filmmakers who won honourable mentions in the Agency’s second film competition for young refugees were honoured.

The short film “My world”, made by 15-year-old Afnan Abdallah, unfolds her views, dreams and ambitions as a Palestine refugee living in Jordan.

“We are a talented family. My grandfather can mimic Arab celebrities, and can make sounds similar to background music,” she said. “We tell him that he should go on the TV show Arabs Got Talent!”

Another filmmaker, Mais Salaman, took 1,000 pictures and stitched them together to make a short film.

“I’m very happy to see the film screened. It is very good to find people who appreciate art,” said Mais.

UNRWA and the EU – a decades-long partnership

Ms Joanna Woronecka, the ambassador and head of the EU delegation in Jordan, commended the Palestine refugee talent at the opening ceremony.

“I believe it is important for Palestinian youth to show their talent to the world. It is admirable that we have two young, female Palestinian refugee filmmakers amongst us,” said Ms Woronecka.

From her side, the Deputy Commissioner-General of UNRWA, Ms Margot Ellis, extended her thanks to members of the refugee community who were present at the ceremony, and to the EU for their continuous support to UNRWA.

She said: “The photos and films here today provide us with a glimpse into the lives of refugees – a view of the day-to-day difficulties they face and see, and the inspirational ways in which they surmount the numerous obstacles placed before them.”

View all the winning photographs

More about UNRWA in Jordan

About UNRWA and the EU

The EU‘s principal objective in delivering support to Palestine refugees is to contribute to the just resolution of the refugee issue as part of a comprehensive settlement of final status issues. In doing so, the EU ensures that the essential humanitarian and development needs of the Palestine refugees are met. It delivers most of such assistance through its partnership with UNRWA.

The EU has been UNRWA’s largest donor since 1971. The bulk of EU financial support is devoted to UNRWA’s core funding enabling it to provide essential education, health, and social relief services to Palestine refugees.

To find out more about the EU’s assistance to the Palestinians, visit the Europa website