Home » Newsroom » Features » The Poverty Spiral
Back to Newsroom “When I stopped working, I could no longer make the rent I owed the landlord.  I heard from people about this area we live in now, and because of the miserable situation, I had no choice but to bring my family here.  As you can see, we live in something like a stall. We live on a garbage landfill – in the literal sense of the word.” Mahmud Farwana (63) is a Palestine refugee living in the Nahr el Bared area in Khan Younis in the south of Gaza.  Before the blockade was imposed on the Gaza Strip 15 years ago, he was working in construction and able to support his family of 12 well.

His family’s fortunes changed drastically once the importation of construction materials was interrupted and he lost his job. To try make ends meet, Mahmoud started transporting crushed stones and metal scraps with the help of a donkey.  He has since developed a heart condition and suffers from pain in the joints and the bones. “Now, I am not able to do any work at all,” he says.  So, he took two of his two sons out of school to work instead of him: “My sons go out every day from morning to evening. They get paid between 10-20 shekels a day, which they spend to feed the donkey and buy food for their siblings,” he explains.   “Today, my sons went out extra early to put in few extra hours to earn more money to buy chocolates so their sisters can celebrate their graduation from school.”

Before leaving school, Mahmoud’s sons Hamza (16) and Alaa (15) attended the UNRWA Sheikh Khalil and Tariq bin Ziyad school in Gaza. “When my father was no longer able to work, I left school to help provide for the basic family needs. I was in fourth grade then,” says Alaa. “My brother and I go out to work every day from 5 a.m. to 1 pm.  Hamza helps me collect pieces of crushed stones and scrap metal from the landfill and put them on the cart to sell them,” he explains.

“Every time I see students going to school, I wish I could go back and get an education. Unfortunately, I can’t because my father is not well and cannot work. The school constantly calls my brother Hamza to convince him to return to school. Every time, he tells them that he cannot return because of the bad economic situation of the family and because he has to work to help secure a living for the family,” Alaa adds.

School attendance is also affected by the deep psychological impact left on the majority of children in Gaza by the ever-repeating cycles of violence and poor health, in general. Another one of Mahmoud’s sons, who is also named Mahmoud, after his father, is reluctant to go to school since the conflict last May. “He’s afraid of going to school for fear of bombing and war while he’s there,” says the elder Mahmoud. 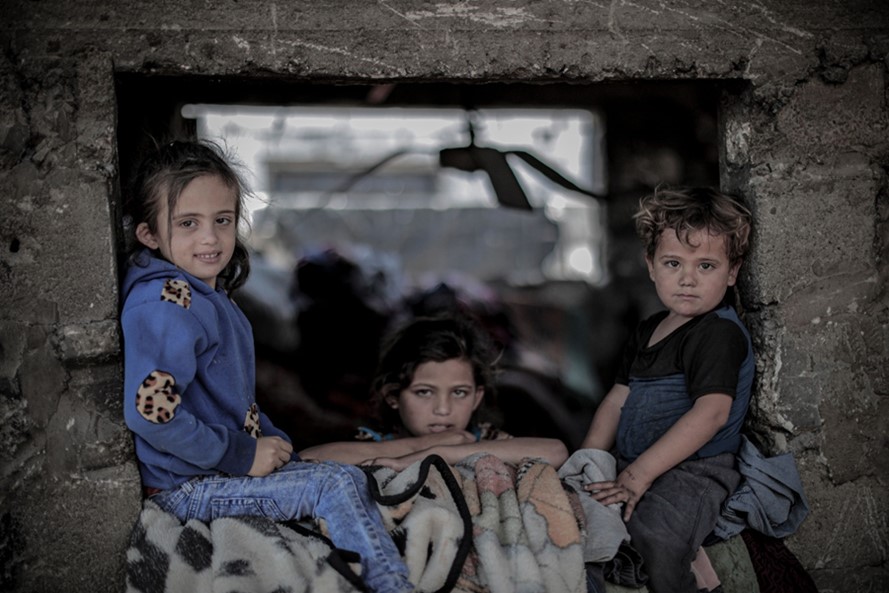 “Four of my children have health problems: two of them suffer from asthma, Malak suffers epilepsy and Aya suffers from a very low blood count. I don’t send them to school because they cannot walk the two kilometers to get there. It is also a very dangerous deserted road, full of scorpions and snakes,” he laments.

The three daughters that are getting an education, enjoy attending an UNRWA school and are excited to learn new things.

Poor health, which is often exacerbated or even brought on by the poor living conditions, represents a further financial challenge. Mahmoud takes one of his sons to Nasser Hospital in Khan Younis for treatment almost every week. He explains: “Sometimes, the medicine prescribed by doctors is available in the UNRWA pharmacy, sometimes it isn’t.  Unfortunately, unless it is available at an UNRWA pharmacy, I cannot provide it for my son, because I cannot afford to pay the cost at another pharmacy.”

Mahmoud’s family bears all the hallmarks of the multidimensional nature of the spiral into poverty, including unemployment, food-insecurity, poor housing, school leavers and poor health. Tragically, after 15 years of a devastating blockade and repeated cycles of extreme violence and destruction of infrastructure, his family is not alone.

In a survey on the socio-economic situation of Palestine refugees in the Gaza Strip conducted by UNRWA in November 2021, eighty-one percent of Palestine refugees in Gaza were found to live below the national poverty line, with 33 per cent of families describing themselves as ‘extremely poor.  Of the 1.7 million Palestine refugees who reside in Gaza, some 1.1 million (or some 66 per cent) are now dependent on food assistance from UNRWA, down from fewer than 80,000 in 2000.

UNRWA has had a holistic approach to tackling the multi-dimensional nature of poverty throughout 72 years of operation, including providing access to free primary health care, basic education, livelihood opportunities, relief and social services, and shelter and environmental health.

At the same time, the Agency works to mitigate the circumstances of the most vulnerable Palestine refugee families, as for example in Gaza, under the distorting conditions of the blockade. Like hundreds of thousands other families in the coastal enclave, Mahmoud’s family receives food assistance from UNRWA on a quarterly basis through its social support network to secure a minimum existence. The package typically includes wheat flour, rice, sunflower oil, sugar, whole milk, lentils and chickpeas. Other assistance extended to vulnerable families includes the provision of temporary employment opportunities and emergency cash assistance to mitigate the socio-economic hardship caused by overlapping crises.

“The food items we receive from UNRWA are a lifeline for our family. The milk powder, in particular, is essential. My kids like to drink it every day. If the food assistance were to stop one day, we will eat from the garbage,” says Mahmoud.