Restrictions on freedom of movement waiting for a miracle 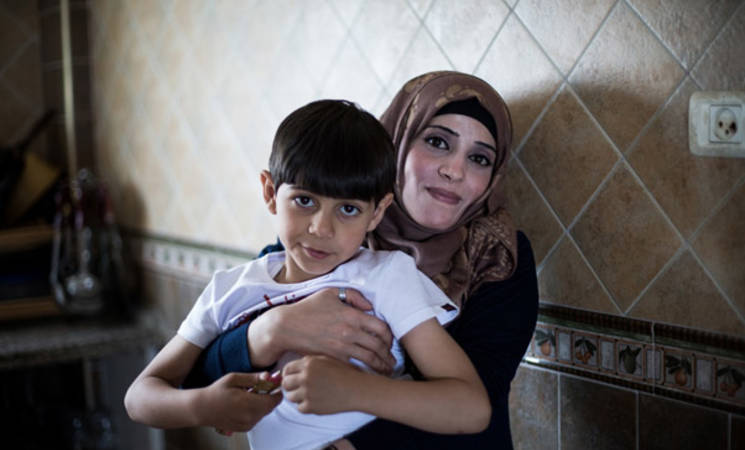 The blockade on the Gaza Strip has entailed a tight control over all aspects of life since 2007, severely restricting the movement of goods, as well as people. This lack of freedom of movement impacts the Palestinians’ right to enjoy the highest standards of human rights and development, including the right to medical treatment.

Six-year-old Ali Farahat is a Palestine refugee boy living in Rafah, southern Gaza. Since he was born, Ali has been living in political, social and economic instability and under a blockade. In spite of his youth, he has already lived through two armed conflicts, the last of which, in the summer 2014, caused unparalleled destruction and human loss across the Gaza Strip.

Ali was born with a congenital flaw in his oesophagus that does not allow him to eat normally. Because of the lack of specialized medical capacity in Gaza to address his condition, he would have to leave the enclave to get the appropriate treatment.

Years of socioeconomic decline, conflict and closure have left the health sector across the Gaza Strip lacking in adequate physical infrastructure and sufficient medical training opportunities for health staff. Facilities are overstretched, and service is frequently interrupted by power cuts. These challenges further threaten the health of the population, which is already at increasing risk. As mentioned in the 2020 United Nations Country Team’s joint report, Gaza in 2020: A liveable place?, Gaza needs 800 additional hospital beds 1000 additional doctors and 2000 nurses by 2020 to maintain the current level of services,

“My son needs a surgery to solve his problem, and it has to be in the West Bank or abroad. We communicated with three hospitals and they are willing to help him, but we have been waiting for over one year to get the permit,” commented Ali’s mother, 36-year-old Hayam Farahat, with distress.

Israel did not only impose restrictions on travelling abroad, but also for Palestinians travelling to and within the West Bank, heavily restricting people, and particularly youth, from pursuing education or trying to find work; families from visiting relatives; and sick patients from seeking medical treatment.

These restrictions have reduced access to livelihoods, essential services and housing; disrupted family life; and undermined the people’s hopes for a secure and prosperous future.

Erez is now the only crossing between Israel and Gaza that is available for the movement of people. The crossing is at the northern end of Gaza. Israeli policy technically allows for the movement of limited numbers of authorized travellers, including Palestinian medical and humanitarian cases. Residents of the Gaza Strip are required to obtain individual exit permits to Israel. The permit is issued by military officials rather than the Ministry of Interior, and Israel’s policy is to not permit entry for residents of the Gaza Strip except in extreme and exceptional humanitarian cases. The United Nations Office for Coordination of Humanitarian Affairs noted at the end of 2015 a rise in medical referrals out of Gaza, but a decline in the approval of exit permits.

“We face many difficulties due to our son’s sickness; we lack appropriate financial resources, but also getting the permit to go out of Gaza takes a lot of time. In addition to that, my son needs special medicines and milk, which are not available or very expensive in Gaza due to the blockade,” said Nahed Faraha, Ali’s father.

A second crossing that technically allows for the exit and entry of Palestinians in and out of Gaza is the Rafah crossing between Gaza and Egypt, located in southern Gaza and controlled by Egyptian authorities. Yet Rafah is closed during most of the year, except on a few days for a limited number of people.

“If you want to leave Gaza to go to the West Bank through Erez or go abroad through the Rafah crossing, you really need a miracle,” Hayam commented; he added, “I just want my son to get the best medical treatment and live a full and happy life.”

Today, recurrent conflict and the illegal blockade on land, air and sea, entering its tenth year in June 2016, remain the principal causes of the socioeconomic and psychosocial crisis in Gaza. The restrictions on the movement of people and goods continue to collectively punish the civilian population, affecting every aspect of life in Gaza, undermining the local economy and threatening the enjoyment of most human rights, in clear violation of Israel’s legal obligations under international humanitarian law. The compounded effects of the blockade, and the closure of tunnels to Egypt, have also had a less visible, but quite profound, psychological impact on the people of Gaza.