Home » Newsroom » Features » Rubble, stones and steel, a day in the life of a working mother in Gaza
Back to Newsroom

Rubble, stones and steel, a day in the life of a working mother in Gaza 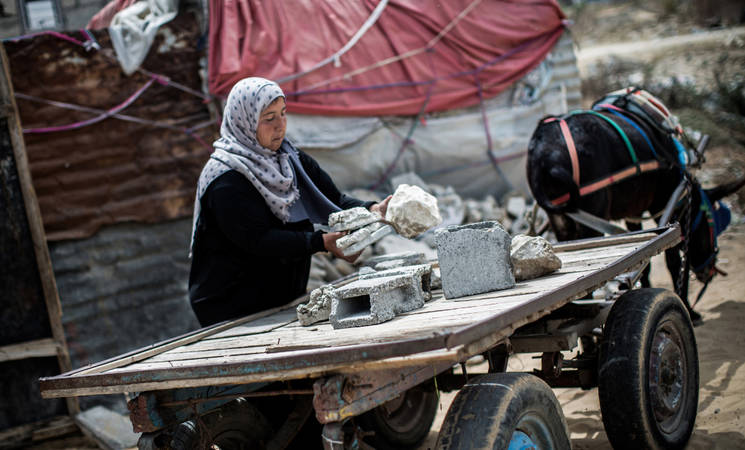 Jihad’s life, like that of all Palestinians living in Gaza, is strongly impacted by the blockade, now in its tenth year. Electricity and fuel shortages, food insecurity, sky-rocketing unemployment rates, extreme water pollution, repeated armed violence and ongoing political paralysis are their daily reality.

In this trying situation Jihad has to take care of her two children and her husband, as she is the main breadwinner for her family. Out of desperation, Jihad, like many others, is earning an income by going through the rubble of damaged houses – a dire reminder of the devastating 2014 conflict – trying to find stones and steel to sell to be able to provide for her family. Jihad not only works long hours, but her work is also physically demanding, and often she returns exhausted and frustrated to her family in their makeshift shelter in the evening.

“Me and my family, we are the same as all the other families in Gaza, exposed and living under unsettling and unimaginable conditions. We can’t find jobs to feed our children, so we try every means possible. My work is very hard – I have to carry steel and stones every day, putting them on my donkey and the going to the market to sell them, and this many times per day,” Jihad explained. “However, I still don’t have a stable income – it all depends on how much steel I can find or how many hours I am able to work before me or my donkey are exhausted,” she added.

Jihad and her family live in very poor conditions, aggravated by the lack of available electricity. Since an Israeli airstrike in 2006 hit the Gaza power plant, Palestinians in Gaza face regular power cuts. Provision of electricity remains well below demand, and this has only become worse after the complete shutdown of the plant in April 2016 due to a lack of available fuel reserves. Power cuts affect private businesses and homes, health services, wastewater treatment plants, and schools.

“My two sons are part of the afternoon shift in their schools, so they need to study in the evening. Unfortunately, the electricity is then usually cut. We depend on a rechargeable lamp, which provides some low light,” Jihad explained.

Due to electricity blackouts of 18-20 hours per day, families in Gaza need to cope with alternatives such as rechargeable lamps, small generators, candles or outdated tools such as kerosene lights. Jihad’s family usually spends their evenings in the dark, using fire to heat up water to take a bath or a shower.

“I am trying to avoid using candles because one day we used them and this caused a fire in the room,” Jihad also said, adding, “The rechargeable lights are better but they are very expensive.”

Recurrent conflict and the illegal blockade on land, air and sea, entering its tenth year in June 2016, remain today the principal causes of the socioeconomic and psychosocial crisis in Gaza. The restrictions on the movement of people and goods continue to collectively punish the civilian population, affecting every aspect of life in Gaza, undermining the local economy and threatening the enjoyment of most human rights, in clear violation of Israel’s legal obligations under international humanitarian law. The compounded effects of the blockade and the closure of tunnels to Egypt have also had a less visible, but quite profound, psychological impact on the people of Gaza.