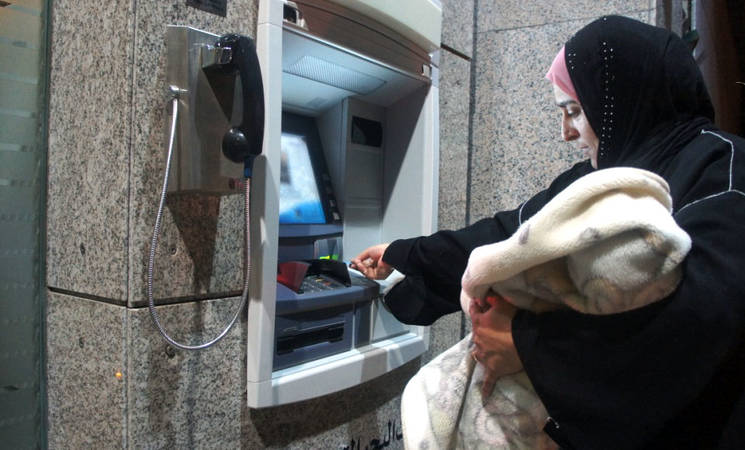 For the first time in Lebanon, Palestine refugees from Syria (PRS) don’t need to wait in lines or visit distribution centres to receive cash assistance. Those who have recorded their details with the United Nations Relief and Works Agency (UNRWA) need only stop by any ATM across the country to withdraw their cash.

UNRWA began cash-in-hand distributions to Palestine refugees fleeing the ongoing conflict in December 2012. The new system, launched in October 2013, will enable PRS in Lebanon to receive cash assistance with greater safety and convenience. “The new card system has many benefits,” said Director of UNRWA Affairs in Lebanon Ann Dismorr. “It gives its beneficiaries more dignity in their plight. It also reduces UNRWA overhead costs while minimizing the security risks associated with cash-in-hand distribution.”

Um Wissam, a Palestine refugee from Yarmouk, approved of the new system. “Before, we had to wait in crowds to receive our cash. This way we feel more dignified,” she said. Since the system was launched, approximately 13,000 PRS families have received ATM cards from UNRWA.

UNRWA cash distributions in Lebanon cover PRS food and housing needs, and will also cover winterization assistance. To enhance efficiency, UNRWA is encouraging all its partners working with Palestine refugees from Syria to utilize this system, which, according to Ms. Dismorr, “has proved to be more flexible and improved security and protection.”

As of November, the Agency records approximately 50,000 PRS residing in Lebanon and receiving assistance. UNRWA is doing its utmost to continue providing them with emergency relief as well as health, education and psychosocial support services through its programmes.

The Agency is able to provide cash assistance for shelter, food and non-food items to Palestine refugees from Syria thanks to the generous support of donors such as the EU and ECHO, as well as the USA, DFID,  Germany, among many others.