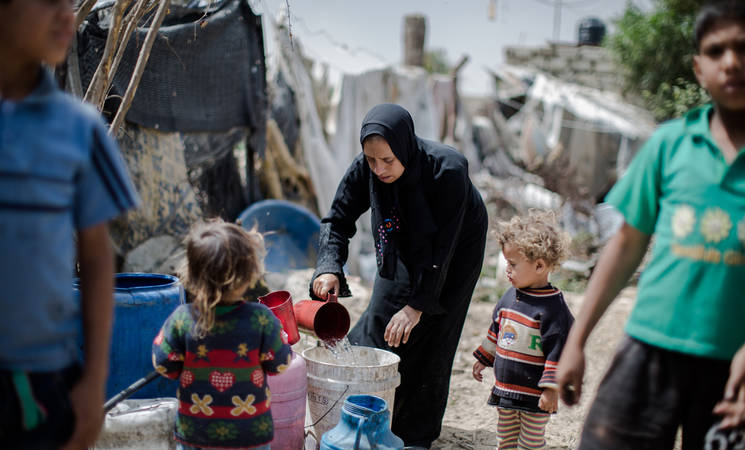 Thirty-three-year-old Salwa Abu Nemer, a Palestine refugee woman, and her eight children live in a makeshift shelter in Khan Younis, southern Gaza. The family lives under trying and undignified circumstances. Yet while they don’t have a home or a source of income, Salwa considers the lack of running water as one of her family’s and neighbours’ most serious problems, as it causes disease and sickness, especially for children.

Salwa’s home is not connected to the main water network, so they don’t have access to municipal water and her family has to buy potable and non-potable water from water tankers, which is expensive. According to the United Nations Office for the Coordination of Humanitarian Affairs (OCHA), many households across the Gaza Strip remain without access to the municipal water supply due to unrepaired damage to the infrastructure sustained during the 2014 conflict.

“Sometimes many days pass and we can’t wash the laundry. The children get scabies and lice,” Salwa said. “Water is one of the basic life necessities, but we have a shortage and to pay for water is so expensive, we often cannot afford it.”

Repairs to water infrastructure in Gaza are delayed, compounded by the fact that several key water, sanitation and hygiene (WASH) items such as pumps, drilling equipment and disinfectant chemicals are on the Israeli dual-use list, meaning that their entry into Gaza is only permitted selectively. Many affected households have become entirely dependent on water tankers.

“We have problems with both potable and non-potable water. We spend up to four days without water, which really is very difficult and strongly affects our daily life,” Salwa commented. “Without water we don’t feel dignified, but sometimes we simply don’t have money to pay for the tanker.”

The situation of water and sanitation for the Palestinians of Gaza is critical. With no perennial streams and low rainfall, Gaza relies almost completely on the underlying coastal aquifer. As groundwater levels decline, sea water infiltrates from the nearby Mediterranean Sea. Moreover, the aquifer gets contaminated by nitrates from uncontrolled sewage and fertilizers from the irrigation of farmlands. Today, 96 per cent of the water from the aquifer is not safe for drinking without treatment. The availability of clean water is thus limited for most Palestinians in Gaza. Since April, average consumption has decreased to 55 litres per person per day, well below the global World Health Organization (WHO) standard of 100 litres per person per day.

“We use a small plastic bucket to store the water, which is not hygienic. When my children want to shower or we need to clean, we move the water from place to place in smaller buckets, which is a waste of effort and time,” Salwa recalled.

The situation with regard to the treatment of wastewater or sewage is no less problematic. As mentioned in the 2012 United Nations Country Team’s joint report, Gaza in 2020: A Liveable Place?, only 25 per cent of wastewater, or 30,000 cubic metres (CM) per day, was able to be treated and re-infiltrated for use in green areas and some forms of agriculture. Already in 2012, some 90,000 CM of raw or partly treated sewage had to be released daily into the nearby Mediterranean Sea and environs (almost 33 MCM per year), creating pollution, public health hazards and problems for the fishing industry.

Since the Gaza Power Plant (GPP) was forced to shut down completely in April 2016 after exhausting its fuel reserves, the reduced electricity supply to wastewater plants resulted in shortened treatment cycles, thus increasing the pollution level of partially treated sewage discharged into the sea. The potential shut down of sewage pumping stations also exacerbates the risk of back-flow and flooding of raw sewage onto streets.

Recurrent conflict and the illegal blockade on land, air and sea, entering its tenth year in June 2016, remain today the principal causes of the socioeconomic and psychosocial crisis in Gaza. The restrictions on the movement of people and goods continue to collectively punish the civilian population, affecting every aspect of life in Gaza, undermining the local economy and threatening the enjoyment of most human rights, in clear violation of Israel’s legal obligations under international humanitarian law. The compounded effects of the blockade, and the closure of tunnels to Egypt, have also had a less visible, but quite profound, psychological impact on the people of Gaza.