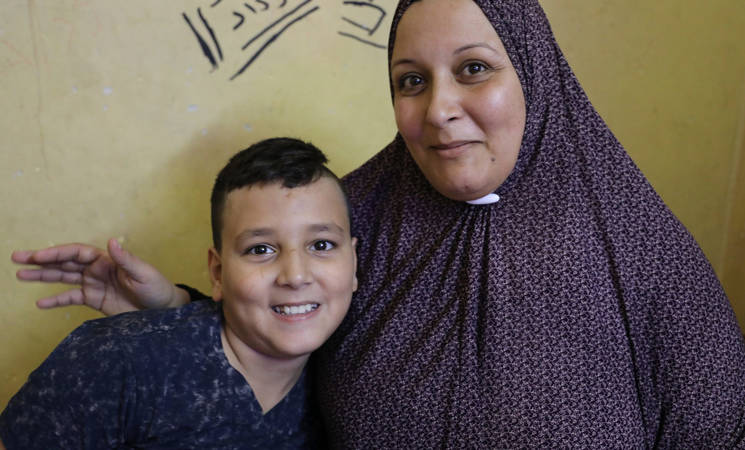 “The children were so excited and couldn’t wait to sleep in their new bedrooms after years of being cramped in one room,” said Nancy  Abu Ajwa. She struggled to find words to express her joy over her children’s excitement. “It was priceless to just see the delight in their faces and the anticipation,”she said. “My daughter has more privacy now, her brothers have more space to study and play. We have three bedrooms now, two bathrooms and a nice kitchen,” she added. For Nancy and her family, this year’s Adha holiday has been like no other. The refugee family who lives in Aqbat Jaber refugee camp in Jericho in the occupied West Bank, is finally able to live in a comfortable home, after years of living in a house with several health and safety issues. Their dilapidated old house, consisting of one bedroom, a living room, one bathroom and a kitchenette, lacked ventilation and was covered with a tin roof that leaked, causing damage to the walls and ceiling.

Nancy and her chronically ill husband, had always dreamed about providing their six children with a safe and comfortable space to thrive. In addition to the stress created by the limited space and lack of privacy, the poor living conditions contributed to severe health problems that affected their children: one of their children suffers from autism and two other boys suffer from chronic health problems ranging between asthma and osteoporosis as a result of the unhealthy living conditions they endured.  Due to the low income of the family, caused by the inconsistency of the husband’s work in palm fields, the family could not afford to carry out any renovations to their old house in the past.

In April 2019, the family reached out to the UNRWA Social Safety Net to help them build a new house with proper living conditions. In September 2019, the family received the much-awaited approval that would make their dream come true. They were selected to receive a generous grant by the Saudi Fund for Development, through UNRWA, to help them build their dream home. The Saudi-funded grant came to support the Shelter Rehabilitation Programme, launched by UNRWA in 2019 and aimed at empowering refugees by providing them with the financial means to build safer new homes. The overall Saudi grant amounted to US$ 3,150,000 and was allocated to reconstruct 61 and renovate 122 shelters in refugee camps in the West Bank.  The Abu Ajwa family was one of the 61 families who benefited from the grant to reconstruct their home and were able to celebrate the Eid in 2021 a healthier and much safer environment for the first time. Nancy's newly rehabilitated kitchen was made possible with generous funding by the Saudi Fund for Development. © 2021 UNRWA photo by Abeer Ismail

UNRWA accompanied the Abu Ajwa family throughout the reconstruction phases, and was able to witness the gradual shift in emotions with the completion of each phase. “The new house is everything we ever wanted, it’s a happier place to live, it gives you peace of mind and it’s beautiful. I want to thank the Kingdom of Saudi Arabia and UNRWA for this opportunity, I feel blessed to have received this help!”

Over the years, the strong support of the Kingdom has enabled for the funding to food aid, infrastructure and health-related projects by the Saudi Fund for Development and KSrelief, totaling more than US$ 800 million in contributions. This funding has enabled the reconstruction and repair of some 250 destroyed Palestine refugee homes in the Gaza Strip.