A scar on a child’s dreams 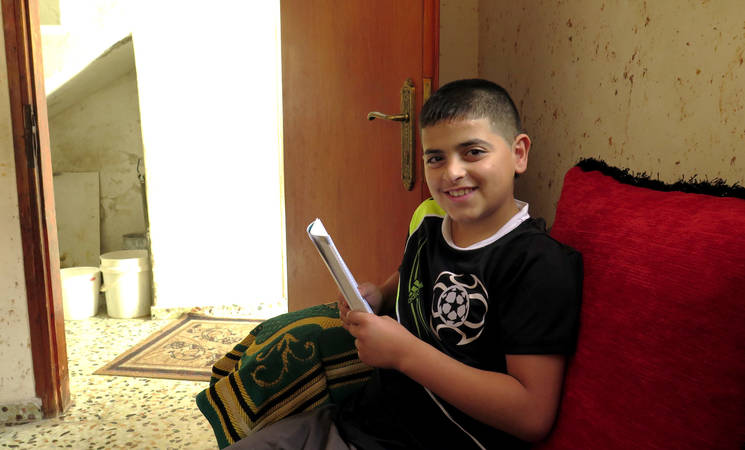 A year after the violent summer of 2014, the pain of their injuries lingers for many Palestine refugees in the West Bank. Mahmood is a young teenager growing up in Arroub camp. Clashes occur frequently in the camp – more than once a week – with search operations by Israeli security forces (ISF) occurring every few days on average.

Mahmood’s life prospects changed for the worse last year when he stuck his head out of a first-floor window and was shot by Israeli security forces (ISF) firing plastic-coated metal bullets (PCMB). The PCMB struck him on the forehead, fracturing his skull. “Suddenly I found myself in a pool of blood,” he recalls.

Tensions were already running high the day Mahmood was injured; the incident occurred two months after two Palestinian boys were shot in Beitunia, six weeks after the kidnapping and murder of three young Israelis in the West Bank and three weeks into the summer 2014 conflict in Gaza.  It was also the day that camp residents had buried Eid Fdalath, a camp resident who was reportedly shot dead when he quarrelled with the ISF.

The use of live ammunition by Israeli security forces in West Bank refugee camps has increased over the past several years and, with it, the risk of serious injury or death to civilians.

“Survivors may face prolonged pain and medical costs,” says Felipe Sanchez, Director of UNRWA Operations in the West Bank. “Education and employment opportunities may also be affected, while some may experience emotional issues and struggle to rebuild their lives.”

International policing standards stipulate that firearms are not to be used against persons, especially children, except in self-defence or defence of another person against imminent threat of death or serious injury. However, UNRWA regularly documents cases of Palestinian demonstrators, particularly those in and around densely crowded refugee camps, who are injured by Israeli forces resorting to live ammunition, including the 22-inch long rifle. Demonstrators in these documented cases are mostly youths and children who have been shot by ISF personnel who neither give verbal warnings nor use warning shots, contrary to internal military orders.

Improper or excessive use of less lethal weapons can also have severe consequences. Last year, in Aida refugee camp, a 45-year-old woman died following exposure to tear gas in her home.  UNRWA has regularly pointed out to the ISF in the same camp that its own installations and staff are being affected by the use of tear gas.

A year after he was shot, UNRWA staff met with Mahmood and his mother and heard about his slow and painful recovery. After the incident, Mahmood was hospitalized for four days and required surgery to remove the PCMB and insert plates to protect his skull. Mahmood’s mother tells us that since his injury, he cannot bear hot or cold temperatures, sometimes turning blue and fainting when he can no longer cope.

Mahmood compares his life before and after the injury. “I cannot focus at school for more than 10 minutes,” he says. “I was very good at school [before], but last year I failed science.”

Psychosocial factors exacerbate the physiological – stigma and self-consciousness are frequent issues for children trying to return to school following injury. “I cannot play football any more, and my friends stopped playing with me as well,” Mahmood adds sadly. “I always remember what happened and how a part of my head is now platinum.”