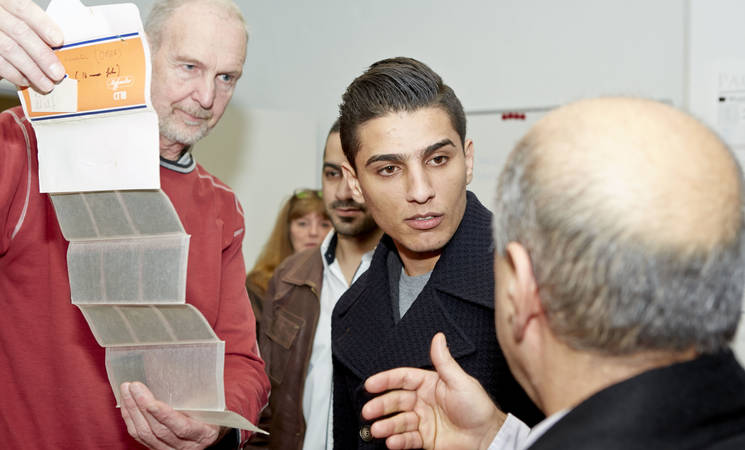 This week, Arab Idol-winning singer Mohammed Assaf visited the Danish Royal Library in Copenhagen, where the Archive of the UN Relief and Works Agency (UNRWA) is being digitized by a team of professional experts, thanks to a generous contribution from the Government of Denmark.

The Danish Royal Library started the process in May 2013 and has completed the digitalization of over 150,000 photos by February 2014. They plan to organize a special exhibition in 2015 upon completion of the work.

"UNRWA work in raising awareness benefits tremendously from this project, which will bring to the attention of the public opinion an incredibly valuable number of iconic photos of historical importance," said Mohammed Assaf during his meeting with the Director of Danish Royal Library, Erland Kolding Nielsen.

Since its founding, UNRWA has produced and collected an audiovisual archive, covering all aspects of the lives and history of Palestine refugees. This archive consists of more than 430,000 negatives,
10,000 prints, 85,000 slides, 75 films and 730 videocassettes. In 2009, the UNRWA Archive was inscribed by UNESCO on the Memory of the World register, recognizing its historical value. Digitizing the archive rescues and preserves all the material, making it easier to categorize the material and make it available in an appropriate manner.

The archive consists of images and films taken by UNRWA photographers (and their predecessors) throughout the tumultuous second half of the twentieth century and the start of the twenty-first. It includes iconic images of Palestinians having to leave their homes in 1948, the establishment of camps in the 1950s, the second flight during the 1967 hostilities, the conflict in Lebanon and the unrest from the second half of the 1980s to the early twenty-first century. The lives of refugees are central to the archive, often in the context of UNRWA work. But it also depicts turbulent political events and includes portraits of public and political figures.