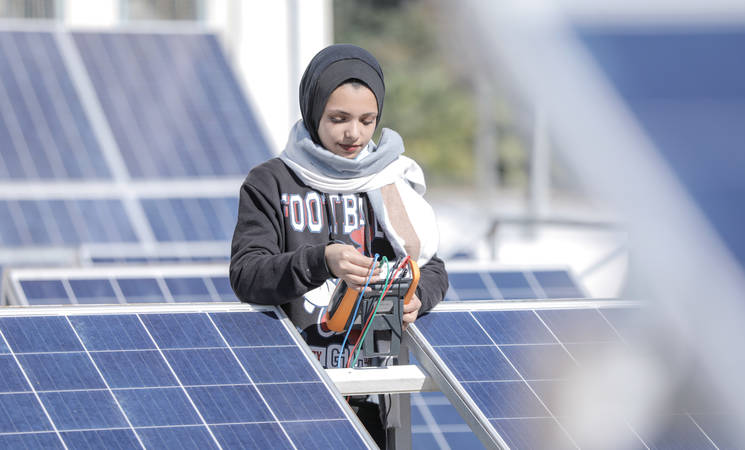 When 20-year-old Ghada Zaki Krayem pulls into a new job site, jaws drop. Unperturbed, she marches up with her drill and toolbox and gets to work installing solar panels.

Ghada and her fellow graduates from the vocational training programme on installation, operating, maintaining and programming of solar photovoltaic systems at the Gaza Training Centre (GTC), supported by the Government of Germany through GIZ, are on the cutting edge of their field in more than one way. Trained in a niche renewable energy field, the women in her class are breaking barriers in a field dominated globally by men.

When making the decision to enter the vocational training programme at GTC, Ghada weighed her options carefully, with the 70 per cent youth unemployment rate in Gaza looming large in her mind. “When I thought about where I want to be in four years, I imagined myself as an entrepreneur. I needed an in-demand specialty and searched for a field of study that would stave off unemployment.”

The emerging renewable energy field was both a demanding and promising option, and Ghada was especially intrigued by solar photovoltaic systems. In the Gaza Strip, expanding renewable energy sources is critical. The small coastal enclave has a population of over 2 million, 72 per cent of them Palestine refugees. Due to a nearly 14-year blockade, fuel shortages are omnipresent and rolling electricity cuts are up to 11 hours per day. But in the sunny Mediterranean region, solar photovoltaic systems that harness sunlight and turn it into electricity are a promising source of renewable energy.

“Before enrolling at GTC, I went to some factories and desalination plants powered by solar photovoltaic systems. I was fascinated, so I enrolled in the GTC programme ready to do whatever I needed to succeed!” Ghada said.

Armed with persistence and determination, Ghada began the training programme. “At first, our colleagues who were men were astonished that there were women in the programme with them. They would question our ability to hold the drill and weld steel beams, but we paid no mind. The women supported each other until the camaraderie became infectious and our men colleagues evolved and began to support us as well.”

The women in Ghada’s graduating class became the first women technicians of solar photovoltaic systems in Gaza. Thanks to the generous funding of the German Ministry for Economic Cooperation and Development (BMZ), Ghada and her 97 fellow graduates were granted apprenticeship employment opportunities at local companies. Gaining the trust of the business owner with determination and hard work, Ghada soon joined the main field team of the company, where she installs, operates and repairs solar photovoltaic systems.

As she builds her experience, Ghada has a clear vision of her next step to entrepreneurship. “I started to learn how to run my own business. I will continue studying alternative power resources, and eventually I want to have my own business and to be an ambassador for clean energy!”

Reflecting on her accomplishment, Ghada tells us:  “The experience of training in a field dominated by men was challenging, but it ultimately strengthened me. Not only have I developed in terms of technical capacity, but I am also more confident and vocal about expressing my thoughts. And as a big sister to six girls, I want to be a good revolutionary role model to them—showing them that when a woman knows what she wants, she can learn, train, improve herself, and achieve her goals.”