Students from Europe and Syria bond over similarities through #myvoicemyschool 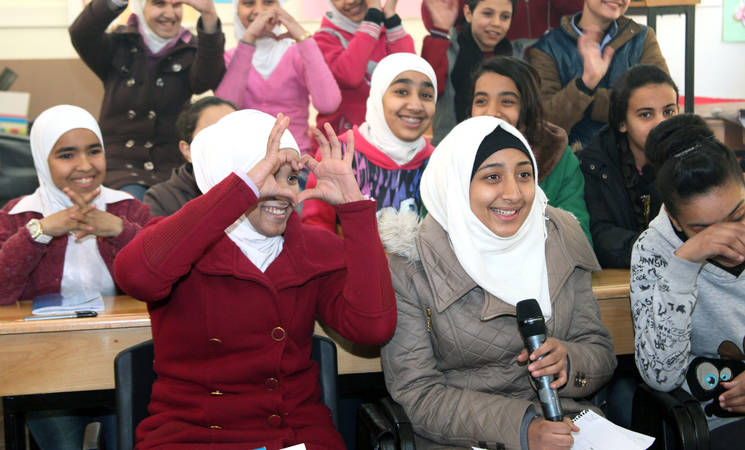 “Hello from London,” call out the Oaklands School students to their peers from the Palestine Girls’ School in Damascus. It is the first of three virtual classroom exchanges taking place this winter as part of UNRWA #myvoicemyschool student advocacy project.

In Syria, Great Britain and Belgium, students in paired classrooms are meeting, discussing, researching and developing a school or community-based advocacy project to highlight the importance of education in their respective locations. This is made possible through Skype’s innovative educational platform, Skype in the Classroom.

The students’ initial shyness dissolved as the first exchange took place and they became better acquainted. “The students from Bow School in [East] London were funny… It was exciting to make new friends,” said Rama, a student at the Yarmouk School in Damascus.

During the initial call, students shared details about their schools, lives and aspirations, and discovered that they had more in common than they had expected.

In the first exchange between the Oaklands and the Palestine Girls schools, the students discovered they were fans of the same pop stars. “[The students in Homs] were surprisingly similar to us. I wasn’t sure what to expect because of the situation in Syria” said George from the European School IV in Brussels.

The discussions have been a real eye-opener for these young men and women. Hafsa, from Oaklands School in London, said: “I respect them so much because of [what is] happening in their country right now and [despite that] they still want to go school every day. They go to school regardless of the risks that are out there for them.”

#myvoicemyschool gives students in different countries an opportunity to see what life is like for their peers on the other side of the globe. It also provides them with a platform to agree on the focus of their education advocacy project. The students work separately in their own schools and keep in touch online. They develop the skills needed to become effective advocates and take concrete action in their schools and communities. For many, it is the first time they are utilizing online technology as a learning instrument.

The students participating in #myvoicemyschool this year will meet again at the end of January for a final Skype conversation to share the results of their student projects.

#myvoicemyschool is a project created and implemented by UNRWA, Digital Explorer and Skype in the Classroom. The purpose of the project is to increase opportunities for students to find their voice and explore the determinants for quality education, the relevance of student voice and the right to opinion and expression. The project is designed by Digital Explorer and funded by UKAID and the European Union. For more information, visit: www.unrwa.org/myvoicemyschool and Digital Explorer: http://myvoice.digitalexplorer.com

Digital Explorer is an award-winning education social enterprise based in London. A pioneer in the development of innovative real-world learning programmes, Digital Explorer supports teachers and pupils in schools internationally to engage with and take action on critical global issues from cultural conflict to climate change.

The European Union is the largest multilateral provider of international assistance to Palestine refugees, providing crucial and reliable support to UNRWA since 1971. Between 2007 and 2014, the European Union contributed over EUR 1 billion in support of UNRWA, including EUR 809 million to support core services. In addition, the EU has generously contributed to UNRWA humanitarian emergency appeals and projects in response to various crises and specific needs across the region. EU Member States provide additional crucial support to the Agency. The partnership between the EU and UNRWA has allowed millions of Palestine refugees to be better educated, live healthier lives, access employment opportunities and improve their living conditions, thus contributing to the development of the entire region.

UNRWA is confronted with an increased demand for services resulting from a growth in the number of registered Palestine Refugees, the extent of their vulnerability and their deepening poverty. UNRWA is funded almost entirely by voluntary contributions and financial support has been outpaced by the growth in needs. As a result, the UNRWA Programme Budget, which supports the delivery of core essential services operates with a large shortfall, projected for 2016 to stand at US$ 81 million. UNRWA emergency programmes and key projects, also operating with large shortfalls, are funded through separate funding portals.

UNRWA is a United Nations agency established by the General Assembly in 1949 and mandated to provide assistance and protection to some 5 million registered Palestine refugees. Its mission is to help Palestine refugees in Jordan, Lebanon, Syria, West Bank and the Gaza Strip achieve their full human development potential, pending a just and lasting solution to their plight. UNRWA services encompass education, health care, relief and social services, camp infrastructure and improvement, and microfinance.