Children at two UNRWA schools in the northern West Bank have organised special activities as part of the Agency’s “safe schools” initiative. A young journalists’ club in Jenin and a festival for children near Nablus are just two examples from a series of cultural and artistic activities happening throughout the area.

A school in Jenin has begun a journalism club for students of all ages. The Arabah school’s initiative aims to equip students with creative tools to deal with issues in school and in the community.

The school students train in drama and media skills, such as how to write reports and investigate stories, and principles of good journalism. The students have also had a chance to try TV production and photography. The girls work as a team, distributing roles between each other. By creating an encouraging environment, the club helps the students to build their self-confidence, as well as pick up some valuable work experience.

“Taking part in the young journalists’ club has encouraged me to express my opinions and ideas,” says Rand Sameer, a student at the school. “Working in the club has really enhanced my self-confidence."

One of the club’s recent achievements was to organise a discussion about the role of the family in the social lives of young people. The students themselves organised the event and invited all the participants, ranging from local media to community figures, educational experts, local religious leaders and parents. Some of the team were responsible for managing the discussion and interviewing participants, while others screened TV reports in order to enrich the debate.

Raghad is putting together a TV report that the club will later watch in order to have a discussion with the help of a local professional. “I really enjoy producing reports and interviewing people,” she says.

Membership in the club aims to promote the initiative of young people like Raghad, and encourage them to think critically and creatively about their present and future.

Another activity linked to UNRWA’s safe schools initiative was a children’s festival that gave local young people a chance to unleash their creative energy and get involved in the life of their community. The festival was made possible through partnering with a range of local community organisations.

Held in Balata camp near Nablus, the festival used students’ talents to put on a packed programme of drama, photography, film and musical performance.

The safe schools initiative is running throughout UNRWA’s schools in the West Bank. The project aims to encourage young people to make friends, take an effective role in community life, and get involved with the work of local organisations.

More about the West Bank 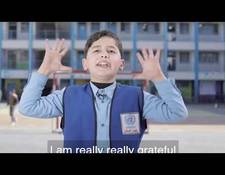