Thousands missing out on education in Gaza 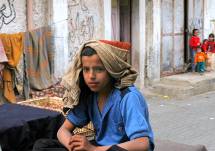 Thousands of Palestinian refugee children in the Gaza Strip are unable to receive adequate education, according to UNRWA.About 39,000 child refugees in Gaza will not attend UNRWA schools this year, since the Agency is unable to build or rebuild schools due to the Israeli blockade, damage sustained during the 23-day Israeli offensive (27 December 2008 - 18 January 2009) and population growth, UNRWA spokesperson Chris Gunness said.

Mother Noa Ashi said: “My sons have trouble learning due to the large number of children, usually over 40 per class.” Her sons Tareq, aged nine, and Mohammed, seven, attend New Gaza Elementary School (A) run by UNRWA in Gaza City. “The classrooms are small and three children share each desk,” she said, adding that Tareq and Mohammed attend school only four hours a day.

Israel imposed an economic embargo on the Gaza Strip after a Hamas takeover in June 2007 and in retaliation for the firing of rockets from Gaza into Israel. Israel considers Hamas a terrorist organization and says its import restrictions on items such as cement, steel and most building materials are to prevent Hamas developing weapons or fortifications.

Israel says there is no humanitarian crisis in Gaza and most of the basic needs of the local population are met as at least 140 truck-loads of aid are allowed into the Strip every day. The UN has said this is far from sufficient.

Infrastructure is also in a state of collapse: 80 million cubic litres of untreated sewage is pumped into the Mediterranean Sea each day, and 90 per cent of the water is undrinkable by World Health Organization (WHO) standards, according to Ging.

To make matters worse, UNRWA is 25 per cent underfunded, lacking US$100 million out of its $500 million budget, he added. The Agency is only able to provide 40 per cent of daily caloric needs to food aid dependent refugees, while the international standard in 76 percent.

UNRWA schools run double shifts in Gaza due to overcrowding. “We are also unable to recruit new teachers due to our budget constraints,” said Chris Gunness.

Mathematics teacher Sufian Ghanem said: “There are too many students in our school and we lack the materials to build rooms.

“The children are impoverished, often lacking shoes. The school lacks a library and place for outdoor activities.”

About 60,000 structures were damaged or destroyed during the Israeli offensive, according to Gunness, who said an improved infrastructure and education system in Gaza would only come about when the blockade is lifted and the Karni crossing is opened.

Karni, the only major commercial crossing along the Gaza-Israel border, is controlled by Israel and mostly closed, according to the UN Office for the Coordination of Humanitarian Affairs.

The Gaza government aims to rebuild, but has been unable to import necessary construction material, Ahmed Yousef of the Hamas-led government in Gaza told IRIN. Eighteen months after the offensive three-quarters of the resulting damage remains unrepaired.

There are 750,000 children living in Gaza. "On this road and under these conditions - lack of access, physical deterioration and its psychological effect - the situation will get worse," said Ging.

More than half of UNRWA’s budget goes on education, with over 20,000 teachers educating half a million Palestinian children in the Levant countries each day; 222,000 Gazan children are enrolled in UNRWA schools.

UNRWA is responsible for providing health care and other services to about one million refugees in Gaza, 800,000 of whom receive food assistance. Seventy percent of Gaza’s 1.5 million inhabitants are registered refugees.