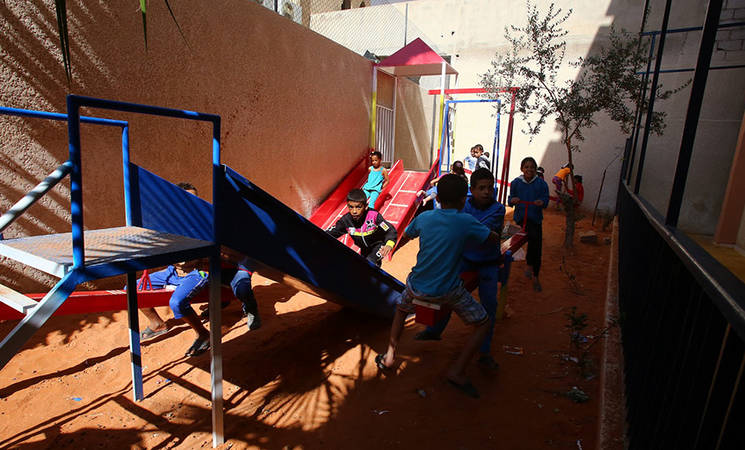 When UNRWA staff first re-entered the Palestine refugee camp Qabr Essit last year, they were overwhelmed by the scale of destruction. Ten thousand square metres of ground was covered in rubble. Houses were destroyed and two schools were among the installations that had been seriously damaged in the camp, which is located 15km outside of Damascus. Thanks to generous support from donors, in particular the United States Government, UNRWA began rebuilding and supporting returning refugees as they began the difficult process of putting their community back together.

After the rubble was removed to make it safer for residents to return, UNRWA consulted with the community about the next priorities. Camp residents prioritized the reconstruction of UNRWA schools, so their children could begin to regain a sense of stability and renewed hope. After intense efforts by UNRWA workers and the community, an important milestone was reached last week – the reopening of the Yarmouk/Alma School.

Director of UNRWA Affairs in Syria Michael Kingsley-Nyinah said, “This achievement is a symbol of the steadfast resilience of Palestinians. It also demonstrates our unwavering commitment to seize every available opportunity to restore our services in Syria to the benefit of Palestine refugees, wherever circumstances permit.”

The reconstruction of the Yarmouk/Alma School eases the overcrowding in nearby schools that had absorbed the extra students. Work on a second school, Dallata/Beit Jibrin School, is scheduled to begin in early 2015, with the goal of opening in time for the 2015/16 school year. However, this is just a start. Additional funding is needed to further rebuild in Qabr Essit and elsewhere.

Prior to the conflict, Qabr Essit Camp was home to over 23,000 Palestinian refugees, and a place where many Syrians lived alongside Palestinians. Qabr Essit was also home to the shrine of Sayyidah Zaynab (the granddaughter of the Prophet Mohammad), making it an important place for visitors.

The rebuilding of Qabr Essit Camp and its schools provides a symbol of hope for other displaced Palestinian refugees, who long to see a similar revival in their communities. As one UNRWA staff member said with optimism, “My family used to live in Yarmouk. One day too, I will be able to start a shop or a pharmacy there.”

In 2014, the United States was the largest contributor to the UNRWA General Fund, with generous contributions totalling $135 million. UNRWA is grateful to the US Department of State for its consistent and generous support, which totals more than $398 million in 2014 for overall UNRWA programming. The General Fund is supported by 23 other international donors.

The UNRWA General Fund helps UNRWA fulfil its mandate to respond to the needs of approximately five million Palestine refugees in five areas of operation, including Syria. This includes the maintenance of UNRWA-run facilities such as schools, community centres, women’s programme centres and health clinics. Prior to the conflict, UNRWA maintained 210 facilities in Syria, including 118 schools.