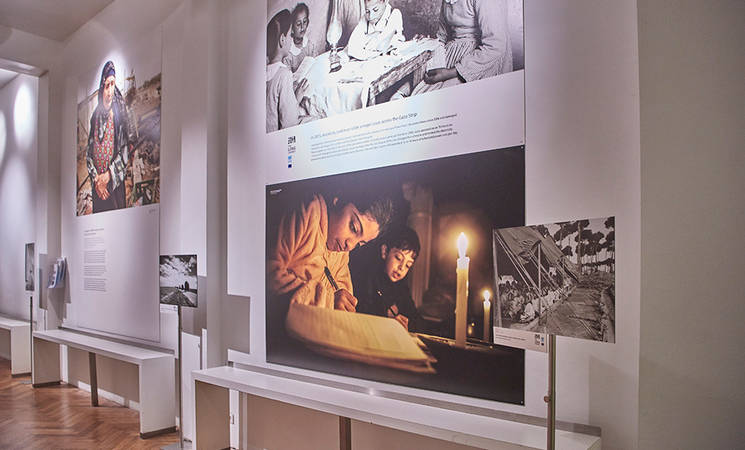 ’The Long Journey’ exhibition, featuring select images from the audiovisual archive of the United Nations Relief and Works Agency (UNRWA), is currently on display at BOZAR, one of Belgium’s most prominent cultural centres, until 10 January 2016. The travelling exhibition has already been shown in New York, Ramallah, Rome, Turin, Jerusalem, Zurich, Brasilia and other places around the world. The Brussels edition is made possible thanks to the generous support of the European Union (EU), the Agency´s largest multilateral donor and partner since 1971. This exhibition aims to illustrate how, over the last 45 years, the EU (starting with the European Economic Community) has supported the human development, humanitarian and protection needs of Palestine refugees. From in-kind contributions and cash-for-food assistance in the early seventies, EU support today focuses primarily on the human development of Palestine refugees, through reliable contributions to the Agency’s education, health, and relief and social services programmes.

Since its founding in 1949, UNRWA has collected photographs and films covering many aspects of the lives and history of Palestine refugees – from the 1948 Arab-Israeli War until the unrest that began in 2000 in the occupied Palestinian territory and the current-day conflict in Syria. This archive represents an invaluable historical record of the Palestine refugee experience and as such has been inscribed on the UNESCO Memory of The World Register. The Long Journey is a travelling exhibition of selected works from the archive that tells the story of the many challenges Palestine refugees have faced as well as that of the ingenuity, resilience and steadfastness with which they have responded. The archive is currently being digitized with the support of Denmark, France and the Palestinian private sector, in order to preserve Palestinian heritage and memory and to make it available to a wide audience.

Learn more about the EU-UNRWA partnership.

Learn more about the UNRWA photo and film archive.