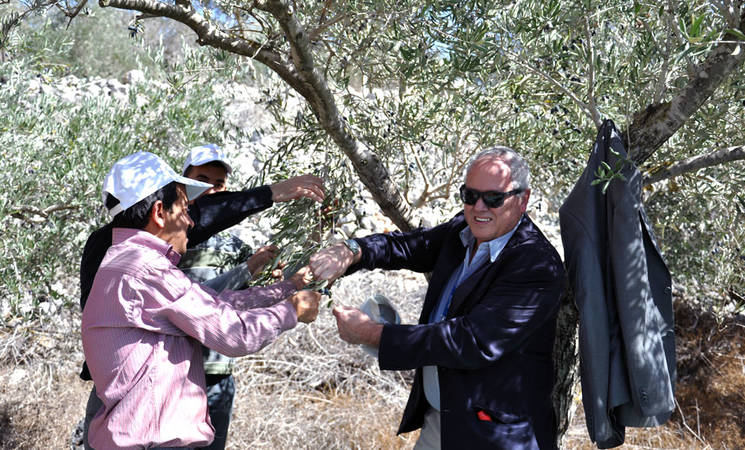 On Tuesday, 22 October, in the West Bank, the United Nations Relief and Works Agency (UNRWA) celebrated the olive harvest of 2013. The Agency organized the event in coordination with its Humanitarian Country Team partners, including the Association for International Development Agencies (AIDA), the Food and Agriculture Organization of the United Nations (FAO) and the United Nations Office for the Coordination of Humanitarian Affairs (OCHA). Representatives from Brazil, Argentina, Spain, the United Kingdom, Japan, the European Union and the European Commission for Humanitarian Aid & Civil Protection (ECHO), as well as international media agencies including MBC, the New York Times and Israeli Channel 10 were present.

The event was organized in the village of Burin, near Nablus. Burin is surrounded by the settlements of Yizhar and Bracha, and as a result of their proximity to these illegal settlements, Burin villagers – many of them Palestine refugees – have had access to their privately owned agricultural land severely restricted. The access restrictions limit farmers’ cultivation and harvesting opportunities, reducing the yields and incomes derived from the crops; to properly cultivate their trees, farmers require safe and unrestricted access year-round.

The current permit regime has limited access to approximately 150 communities. To access their land or their water resources, Burin farmers are required to utilize a prior coordination mechanism or obtain ‘visitor’ permits from the Israeli authorities. For the 2012 olive harvest, the approval rate for permit applications was approximately 48 per cent, and access was restricted to a designated gate.

In addition to these access restrictions, villages are also subjected to regular and increasingly severe attacks on their property by Israeli settlers. These acts of violence include physical assault as well as extensive damage to land and property, including the destruction and damage of olive trees. As of 31 August 2013, OCHA had recorded damage to 7,714 Palestinian-owned trees and saplings by settlers, a significant increase compared to the 6,094 recorded for the same period of 2012.

Speaking at the event, Felipe Sanchez, Director of UNRWA Operations in the West Bank, highlighted the Agency’s continued support of the Burin community and others facing similar situations, stating:  “UNRWA is deeply concerned about settler violence against Palestine refugees in the West Bank and has documented numerous attacks on refugee-owned olive groves in a number of villages located south of Nablus city, next to Yitzhar and Bracha settlements. Around 4,000 Palestine refugees live in this area.” Mr. Sanchez continued, “Through our cash for work programme, UNRWA strives to continue to support Burin residents in the cultivation of their land.”