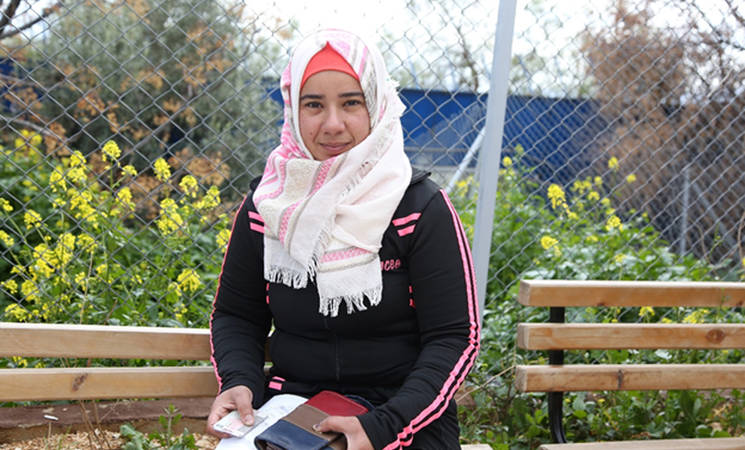 Ranya al Musa, 34, has three daughters aged between six and twelve years-old. She has raisied them on her own since her husband went missing in 2012.  “My youngest was just one month old when my husband disappeared,” she says. The family’s only income is UNRWA cash assistance. “We survive on instant noodles and potatoes. Now that I have received cash assistance, I will buy some chicken as a treat,” she explains.

UNRWA operates one of the largest cash assistance programmes in an active conflict setting anywhere in the world. During the first round of emergency cash assistance for 2019, more than 400,000 Palestine refugees are receiving SYP 20,000 SYP (US$ 46) each. Palestine refugees use UNRWA cash assistance to put food on the table, and pay for a roof over their head. Ranya pays SYP 25.000 (US$ 58) a month for the rent of her one bedroom apartment. “Most of the cash assistance we use to pay rent. I will go pay three months up front now.” Luckily, she also receives a lot of support from her neighbours. “They are of great help,” she says. They give her clothes for her children. And recently, they have allowed Ranya to cook at their house, as she hasn’t been able to afford gas for the last two months. “It’s been very cold.  And we have been eating a lot of cold meals; labneh and bread, because we don’t have any gas to cook with.”  The owner of her local store, where she often buys on credit, has also been kind.  “He sometimes gives my kids treats and doesn’t charge us, because he knows their life is hard.”

But as the family expanded, income dwindled.  One sister lost her job in a clothing shop, the other saw her job as a secretary disappear when the doctor she worked for left Syria.  One sister is a teacher at an UNRWA school, but a single income would struggle to feed eleven people. “We stick together, but UNRWA cash assistance has been of great support,” she says.

Cash assistance to the most vulnerable is supported by funds from the European Union. The EU is the largest multilateral donor to the Agency across all fields.