Home » Newsroom » Features » UNRWA Community Based Centre literacy classes change lives: “Being able to read is a great feeling”
Back to Newsroom

UNRWA Community Based Centre literacy classes change lives: “Being able to read is a great feeling” 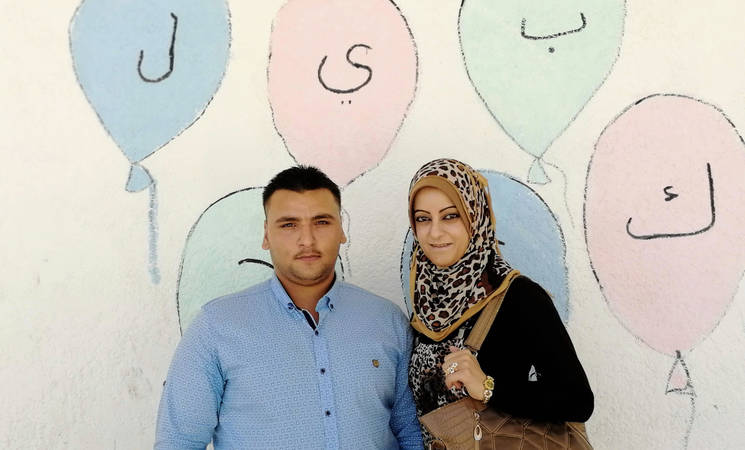 Rima attended school as a child, but the lessons never stuck. “I went to school, but I didn’t like it,’ admits the 33 year-old from Homs. As a result, she never learned to read or write. Initially her illiteracy wasn’t much of an issue. But when her father passed away three years ago, she needed to find work and provide for herself and her family. “I was trying, knocking on doors, but everybody said I needed to be able to read and write,” she explains. With these rejections in hand Rima made a big decision: she would learn how to read. That was eighteen months ago.

She decided to attend a literacy class for adults offered an UNRWA Community Based Centre (CBC) in Homs. “It wasn’t easy,” Rima admits. For starters, it was hard to find a quiet place to study. Her family was forced to leave their spacious home in the old city of Homs because of the conflict. Now Rima lives in a crammed apartment with her mother and two brothers. The rewards of this endeavor have been bigger than she could have imagined. At the end of her six-month course, she bought herself a smart phone as a reward. “I could read the instructions!” she exclaims proudly. “Now I use it to write messages on Whatsapp and Facebook.”

In addition to the practical difference literacy has made in her life, she has discovered the comfort that literary heroes can provide. During the course she read the story of Khawlah bint al-Azwa, a famous Arab warrior. “I was so happy when I read that story. She is an example of how to face life and how to overcome difficult circumstances.” Rima has yet to find a job, but is undeterred and has big dreams for the future. She is continuing her studies and looking to pass her 3rd grade exam, as well as studying to be a hair dresser. Next, she plans to learn a foreign language. “I would like to learn English,” she says.

Rima is just one of the many success stories from the UNRWA community centre in Homs. The centre’s one hundred and fifty member volunteer staff train up to 5,000 people a year in subjects ranging from hairdressing to accounting, in addition to the literacy classes that changed Rima’s life.

Like many of his generation, Zahir, an 18 year-old from Homs, dropped out of school after being displaced by the conflict. “I was in the sixth grade when my house in the old city of Homs was destroyed, and my school certificate was destroyed with it. When I was displaced to Homs camp, I tried to enroll in school. But without this documentation, I couldn’t.”

The violence also destroyed his father’s furniture store; the family’s main source of income. Keen to support his family, Zahir found himself a job hawking second hand clothes. But he dreamt of returning to school. “When I saw kids with their backpacks, going to school, to study, I was jealous,” he remembers.

Last year, he too signed up for classes at the Homs CBC. It was tough. He attended class and studied early in the morning, and would then work a full day afterwards. “It was a challenge, but I want to be an active man. I want to serve society,” he says, looking back. His biggest dream is to return to his father’s business, furniture selling, and maybe even reopen the old shop. Since he can now read and write, he will be able to keep track of the all aspects of business from bookkeeping to advertising.

At the same time, he yearns to keep learning. He longs to one day attend university, and be trained to become a teacher, so he can motivate others to keep learning. “The first time I could easily read the signs on the street, the names of doctor’s offices, of law office and restaurants, that was a great feeling!” he says.