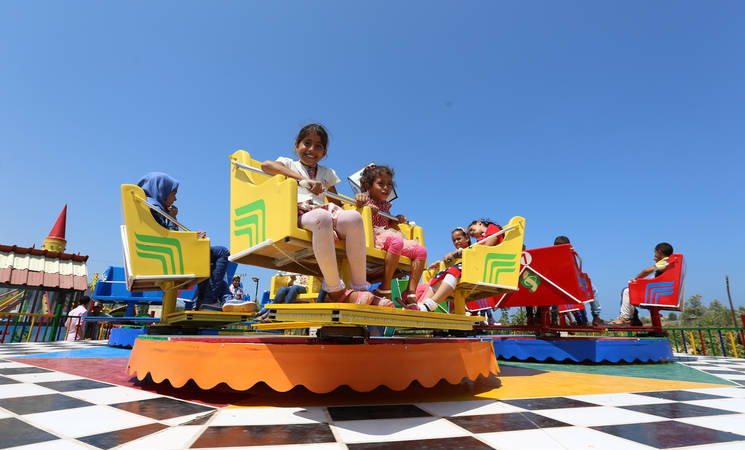 From 7 to 14 August 2016, through its Relief and Social Services Programme (RSSP) and as part of its intervention to support orphaned* children after the 2014 hostilities in Gaza, UNRWA organized recreational trips for a total of 1,000 vulnerable children from the Gaza Strip.

Children and their mothers participated in five recreational days, which aimed at providing psychosocial support to the children, along with providing them with cash, clothes and vocational training.

The recreational trips to the Sharm Park Resort included a number of activities such as playing games, clown presentations, dabka dancing, and storytelling.

The recreational activities are implemented as part of the 'Intervention to Support Orphaned Children after the 2014 Hostilities Project” which began in 2015 with funding from Islamic Relief USA.

Yaqeen Abu Saeed is 12 years old and lives in central Gaza. She participated with her two brothers in the recreational trip to Sharm Park. Yaqeen lost her father during the summer 2014 hostilities in Gaza. She and her mother were severely injured. It took her two months to recover physically and to be able to walk. Yaqeen is fascinated with drawing and colours: “Drawing helped me to express my feelings, and to release all the stress,” she said.

Nine-year-old Raghad Al Jarba lost her father in the summer 2014 hostilities in Gaza. She, her sister Roaa, and their mother took part in the recreational trip to Sharm Park. “I am happy that my children are given the chance to play and have fun with other children, they enjoyed this,” said Raghad's mother.

Bilal Khalifa and his two little sisters lost their father in the summer 2014 hostilities in Gaza. He became shy and isolated, but his mother Eman Khalifa worked hard to encourage him to play with other children. “I noticed that he changed a lot, he became more sociable,” his mother said. “I am happy to participate in the trip,” Bilal said. Al Mohtadi Al Maqadma is nine years old. He and his brothers Mahamoud, who is eight and Naeal, who is seven, felt very happy to receive the invitation to participate in this recreational trip. The children had fun and tried a number of games. They especially enjoyed watching the clown presentation. “For a long time, this is the first time to see the happiness in my children’s eyes,” their mother Najwa Al Maqadma said. “My brothers and mother playing with me makes me happy. I want to try all the games!” Al Mohtadi said. “I love my family.”

Today, UNRWA offers a comprehensive protection programme for the children and their mothers and provides a wide range of services such as awareness sessions on the legal rights of vulnerable children, psychological support, academic consultation and career advice as well as recreational activities. The UNRWA orphans project started in Gaza in 2008.

*In Gaza a child is considered an orphan when without a father and less than 18 years old.