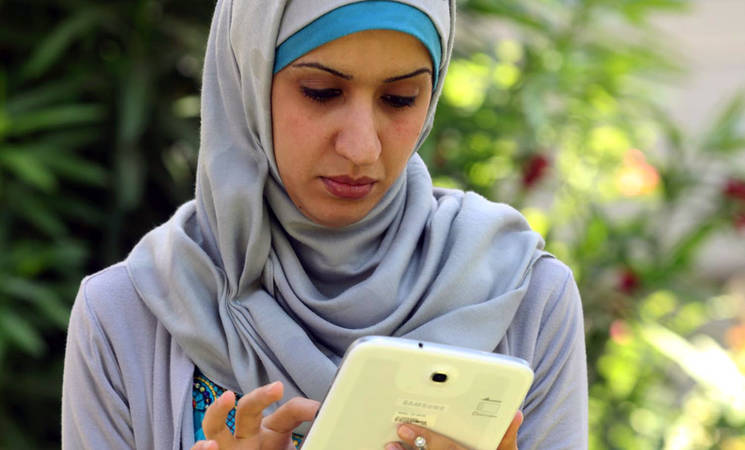 On 31 May 2015, UNRWA restarted poverty assessment home visits in Gaza after a year-long interruption, during which the Agency engaged in intensive efforts to improve the quality, fairness and speed of the process, which serves to determine eligibility for food assistance and other poverty-targeted services. Within the reform process for its Poverty Assessment System (PAS) in Gaza, the Agency has developed tablet-based software that can be considered the next generation of survey technology worldwide.

Families who have long been waiting – some for over a year – to be considered for food assistance can now be surveyed and expect a fast-tracked result, which means that those who qualify will start receiving their food rations as soon as the next quarter. This has been made possible through new survey software that enables UNRWA to assess the poverty status of more than one million Palestine refugees, including the current 876,000 beneficiaries and new applicants, in a more rapid and accurate way. The PAS is customized to the Gaza context and is designed to assess even large families and create household profiles with up to 35 members with various characteristics. The tablet’s cloud-based survey guides the social workers through the process, making sure no questions are missed and checking the consistency of answers with previous replies to ensure the quality and accuracy of the assessment. Since the system is now integrated – meaning that previously assessed information is saved and available on the tablet – the assessment has become much faster and easier for the social workers in the field, who make home visits to each and every family surveyed.

The three-way partnership that was formed for this purpose consists of UNRWA programmers, members of the UNRWA-supported social enterprise Gaza Gateway, and Harvest Your Data, a commercial company from New Zealand.

“During the last two months of the project I worked day and night. I came home after work, spent some time with my children and continued to work until 4.00 a.m. to be able to communicate with the partner company in New Zealand,” recalled 31-year-old Gaza Gateway manager Rasha Abu Safieh, who graduated in Information Technology (IT) from the Islamic University in Gaza and has IT-experience in the private, humanitarian and academic sectors.

“The PAS showed how well a private-public partnership can work; in addition, it proved how talented Gaza developers are,” explained her colleague Mustafa Abu Tahoun, the manager of the UNRWA IT Service Centre in Gaza.

The talent of the Gaza developers was also acknowledged by Steve Cohn, the head of the New Zealand company Harvest Your Data who said that he had been involved in software development for 30 years and was impressed with how the UNRWA team “needed very little support.” Harvest Your Data worked at concessional rates for the development of the PAS software. “When I understood the business requirements and the situation of the people of Gaza, I wanted to contribute, albeit in a small way,” explained Steve.

“Technology is the gateway to all knowledge and it can lead to true change,” said Rasha. “With the PAS software, we have developed the second generation of survey-technology, which could benefit the whole world. It is a great achievement to be part of this process.”