Home » Newsroom » Features » UNRWA Humanitarian Assistance: A Source of Survival for Palestine Refugees in Syria
Back to Newsroom

UNRWA Humanitarian Assistance: A Source of Survival for Palestine Refugees in Syria 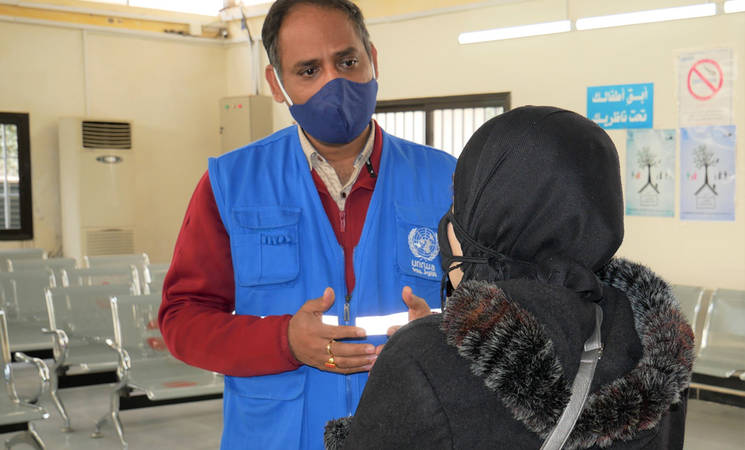 The ongoing crisis in Syria, which just entered its twelfth year and has been aggravated by COVID-19 and its related socioeconomic consequences, casts a dark shadow on the lives of Palestine refugees remaining in the country. Some 60 per cent of Palestine refugees have been displaced from their homes at least once and many have lost their jobs and sources of income; they continue to struggle with the adverse conditions affecting their daily lives.

Jameeleh, 42, is one of thousands of Palestine refugees who has been impacted by the conflict. In 2013, she was forced, together with her husband and son, to flee their house in Khan Eshieh camp, south of Damascus, to Jdaydeh. There they shared a rented apartment with Jameeleh’s parents, who had also been displaced from Qabr Essit camp in Damascus.

In 2017, as hostilities receded in Khan Eshieh camp, Jameeleh and her family decided to move back to their destroyed house. They could no longer shoulder the cost of their shared rental apartment.  Since then, the family has used UNRWA cash assistance to buy food and carry out minor repairs to the roof of the damaged home.  Jameeleh was very relieved to be back home and be free from the burden of paying rent.

In recent years, the deteriorating Syrian economy and staggering inflation has given rise to food insecurity. Palestine refugees like Jameeleh and her family found themselves struggling to meet their most basic needs. “It’s been a long time since we tasted meat,” Jameeleh said, “and we no longer buy fruits because now our money is spent on food staples due to the rising inflation in the country. If it weren’t for the cash assistance we receive from UNRWA and the various other services provided by the Agency, we would be totally exposed to poverty.”

In Syria, UNRWA provides cash assistance to some 145,000 Palestine refugees belonging to most vulnerable categories, helping them meet their basic needs. This intervention is made possible with contributions from key partners like the European Union (EU) supporting the Agency’s emergency response. Since 2012, the EU has contributed over EUR 35 million in humanitarian funding to the Agency’s Syria, Lebanon and Jordan Emergency Appeal.