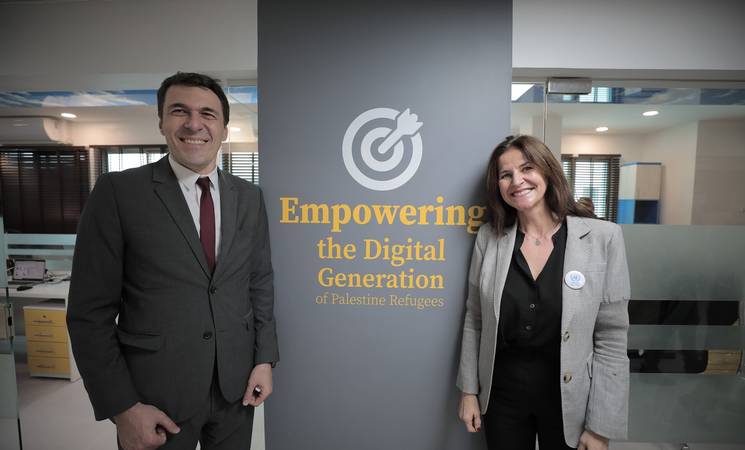 UNRWA launched a 360-degree virtual reality online tour of its Information Technology Service Centre (ITSC), now Gaza’s largest IT employer, during an interactive webinar last week. Staffed by local Gaza-based IT graduates and young professionals, primarily Palestine refugees, the Centre has met the remote tech support and outsourcing needs for UNRWA and the wider United Nations system since its establishment in 2020.

“Events like this are crucial to show the impact on the ground and to explore how we can amplify this impact together,” said Annalaura Anselmi, Chief of Private Partnerships, inaugurating the UNRWA first webinar on empowering the digital generation of Palestine refugees.

Although the humanitarian situation in Gaza is a challenge to digitalization, particularly against the backdrop of 15 years of economic blockade and soaring poverty rates, the UNRWA ITSC has grown to around 22 times its original size over the past couple of years. “Around 83 per cent of Palestine refugees in Gaza are living in poverty. It is driven by chronic levels of unemployment, officially sitting between 45-50 per cent, and for youth, it is much closer to 70 per cent. Through digitalization, UNRWA sees an opportunity to enable young Palestine refugees to access an economy which is not constrained by the blockade,” said Thomas White, Director of UNRWA Affairs in Gaza.

According to Kaan Cetinturk, UNRWA CIO and Director of Information Management and Technology Department (IMTD), Gaza has the potential to host a shared service centre equivalent to that of any developed country. “Youth in Gaza are very capable and well educated, with one of the highest literacy rates. There are also a lot of IT university graduates. We want to increase their livelihoods through employment and internship opportunities,” said Mr. Cetinturk. With the support of partners and donors, UNRWA seeks to expand this model and to implement more digitalization projects to bridge economic divides and increase livelihoods for Palestine refugees. “Job opportunities are not the only thing we aspire to provide. For example, we want to create a digital hub—a space for young people to come together and connect with Microsoft, Facebook, Google, Amazon, and others,” continued Mr. Cetinturk as he elaborated on a number of the Agency’s digitalization proposals.

The guided virtual tour then took the webinar participants on 360-degree panoramic views of the ITSC, showing staff at the workplace. “We aim to add faces to the figures and facts. With this virtual tour, we take you into the Centre as if you are walking there,” said Tasnim Hammouda, IMTD Communications Consultant.