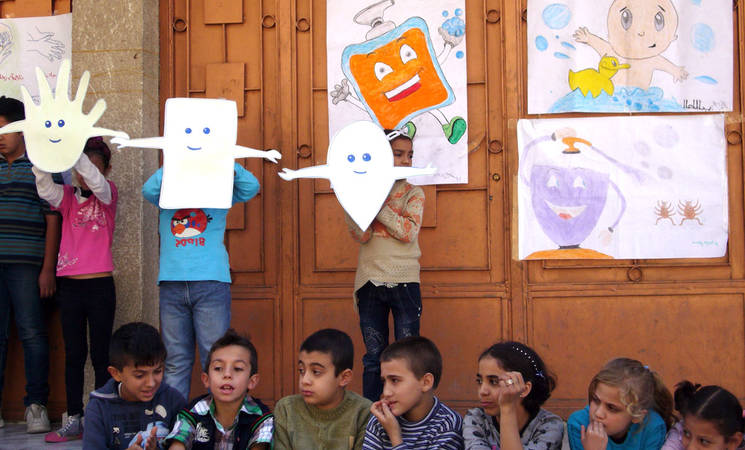 As the crisis in Syria approaches its third year, the conflict, displacement and interruptions in care mean that public health is increasingly at risk. This danger has been made all too clear by the recent outbreak of polio in the eastern province of Deir al-Zour, where the World Health Organization (WHO) has confirmed that 13 children have contracted the virus; another 9 are likely to be affected. These are the first cases of the disease that Syria has witnessed since 1999, and represent a serious danger, not just within Syria but to the entire region and beyond.

Palestine refugees are also at risk. Child immunization is an important part of the main primary health services that the United Nations Relief and Works Agency (UNRWA) provides to the Palestine refugee community, but the regional crisis means that for them as for others, the routine immunization systems so critical to preventing childhood diseases have been broken. Many children are now at risk of contracting serious diseases.

Therefore, UNRWA has joined and supported the rapid vaccination campaigns of WHO and UNICEF, aiming to vaccinate all targeted children under 5 in Syria and surrounding countries. In Syria itself, UNRWA joined the Ministry of Health, other UN agencies and NGOs on 24 October to kick off an immunization campaign targeting polio, mumps, measles and rubella. In the centres housing internally displaced persons, as well as in its health centres, UNRWA is providing the oral vaccine to all children under 5, regardless of their prior immunization history. The Agency has also launched a campaign in its schools, aimed at children in the first through ninth grades.

Some 50,000 Palestinians from Syria have fled to Lebanon, seeking safety from the conflict but finding themselves still exposed to the threat of disease. There, UNRWA has joined hands with UNICEF, the Lebanese Ministry of Health and local NGOs in a nationwide immunization campaign for children under 5, prioritizing areas with high concentrations of refugees from the conflict. On 11 November, UNRWA launched the first round of a house-to-house immunization campaign in the refugee camps, which will conclude on 15 November. A second round will be conducted from 9 December to 13 December. The Agency is also working with UNICEF and the Ministry of Health to ensure that an adequate supply of vaccine is in place.

An important part of fighting the spread of a disease, however, is simple knowledge. UNRWA has been actively participating in a UNICEF awareness-raising campaign focused on controlling and preventing the spread of communicable diseases. On 3 November, Global Handwashing Day provided a valuable opportunity to share this message, and UNRWA invited displaced Palestine refugees, including a hundred students, to the Mua'z Ben Jabal School in Damascus to learn about how simple things like washing your hands can help curb the spread of disease.

One of the participants was 12-year-old 'Amer, who fled Yarmouk in December 2012 with his family and now lives in a collective shelter in the UNRWA Damascus Training Centre. "Although we are displaced living in a collective shelter, we are trying our best to maintain our environment," he said. 'Amer added that he had learned that "We have to make it a habit to wash our hands." In crowded temporary shelters, after all, every little bit of prevention helps, and this is one of its most basic elements. UNRWA and its partners are trying to support children like him as they take this vital step in protecting themselves and their communities.