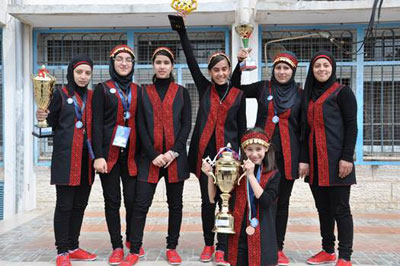 UNRWA school in the West Bank receives first prize for team work and second prize for their robot in an international robotics challenge.

The First Lego League (FLL) is an internationally attended robotics competition, challenging youth between the ages of 9 to 16 years to use social and research skills. Youth from all over the world build robots and compete to navigate them against competing groups for the grand prize.

Teams are then judged on the merits of their research, teamwork, and robot in the competition.

The Indi Hilum, or “I have a Dream” team of Qattaneh Basic Girls’ School received first prize for teamwork and second prize in the challenge itself.

From the West Bank to Cairo 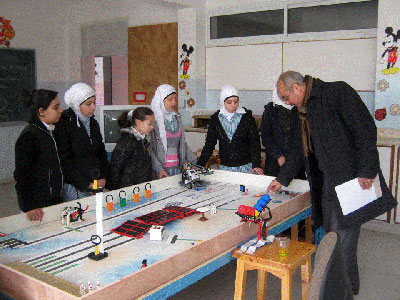 This was the first foray into the FLL for the Qattaneh School. After two months of weekend preparation and extensive teamwork, the school’s hard work paid off. The team was led by trainer and UNRWA science teacher Anwar Durgham and maths teacher and team leader Majdi Mansour. Team leaders as well as students spent their ten-day winter vacation in school preparing for the competition.

In addition to excelling in the competition, the girls were given the chance to represent Palestine on an international stage, explained 11-year-old Maram Fuad. “We wanted to go abroad and greatly enjoyed our opportunity to visit Egypt. We made our parents and community proud”, she added.

“The girls were welcomed by other Arab nations and their energy was infectious. They have inspired their colleagues to aim for a goal and reach it through personal initiative and hard work”, said Assistant Principal and trip chaperon Azizah El-Shiekh.

Achievement against all odds

“We overcame obstacles, such as a shortage of funding and resources, as well as visa and travel restrictions to make it to the competition”, said 13-year-old Raneen Basheer. “Upon our arrival to the country, we were able to put everything behind us and achieved great success.”

The accomplishment of the Qattaneh School is one of many recent success stories at UNRWA schools in the West Bank. Read more here: