Furthering the already strong relationship between Palestine and Japan, three UNRWA preparatory students from Gaza visited Japan from 29 October to 8 November. The students are currently all studying in UNRWA schools inside a Japanese-funded housing project in Khan Younis, southern Gaza. The students were accompanied during their trip by an UNRWA school principal. Their trip was fully funded by the Japanese non-profit grassroots advocacy organization, RESULTS.

On 2 November, Mohammed Abu Hadrous, Rawan Safi and Ghaidaa Abu Khatla, along with their school principal Rawia Hillis, visited Toyo Eiwa/Jogakuin high school, where they met with the school’s principal, staff and students. The students from Gaza exchanged information about UNRWA schools, the curriculum and teaching methods with the Japanese students. “It was a great opportunity to meet these students. In speaking with them, I was really impressed by their way of thinking. Unlike children in my society, Japanese students want to have time before they decide their future plans – I really admired this approach,” commented Ghaida. 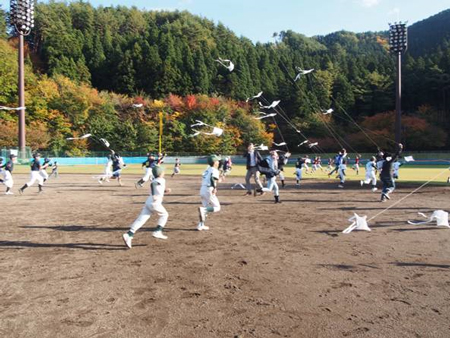 The UNRWA students also met with UNRWA Commissioner-General Pierre Krähenbühl, who was in Japan for an official visit at the same time. On 3 November, the Commissioner-General and the students participated in a kite-flying event in Kamaishi together with other Japanese children. On 4 November, they met with the Prime Minister of Japan, Shinzo Abe. Photo credit: © 2015 UNRWA Photo.

“The people of Gaza are peace lovers, and they don’t want war. All I wish is for my people to be given the chance to experience peace,” said Rawan Safi, who particularly enjoyed her participation in the kite-flying event in Kamaishi, in Iwate prefecture. Rawan wanted to show her solidarity with the Japanese children who had lived and experienced loss and fear when the tsunami hit their area. “It was a time when I felt free, as a child without any fear. I wanted to run, play and enjoy flying the kites as much as I could,” she commented. 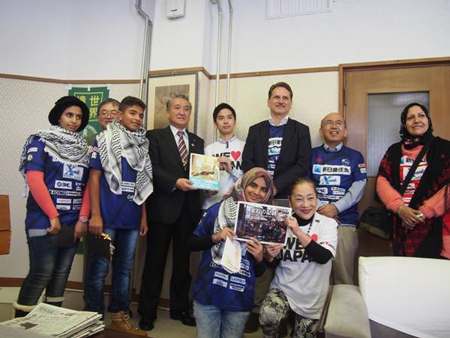 After the kite-flying event, UNRWA Commissioner-General Pierre Krähenbühl and the students from Gaza met the Mayor of Kamaishi, Takenori Noda, who gave them a book documenting the 2011 tsunami in Japan. In exchange, Mr. Krähenbühl handed the mayor a book about the history of UNRWA. © 2015 UNRWA Photo. 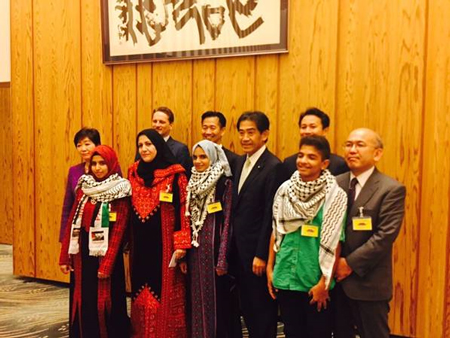 The three UNRWA students represented the children of Gaza during their trip to Japan, sharing the messages that the people of Gaza would like to convey to the world. During her speech in front of Japanese Prime Minister Shinzo Abe, UNRWA student Rawan Safi emphasized, “Gaza people are peace lovers; they don’t want wars. All that Gaza children want is to live in peace.” Photo credit: © 2015 UNRWA Photo. 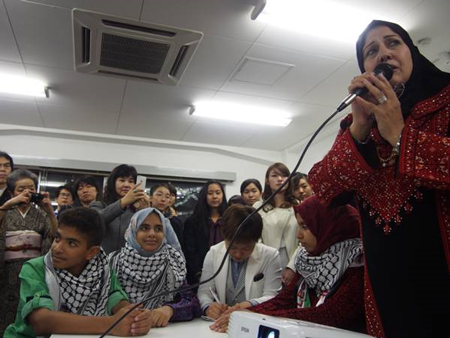 A welcoming ceremony was organized for the UNRWA students and school principal at the RESULTS office, the host organization. During the ceremony, the Gaza students met with the Palestinian Ambassador to Japan, Walid Siam, and with Japanese officials who were very supportive of Palestine refugees. Photo credit: © 2015 UNRWA Photo. 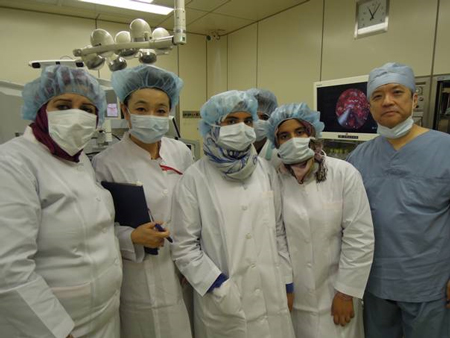 On one occasion during their trip to Japan, UNRWA student Mohammed Abu Hadrous was talking about his dream of becoming a doctor. To encourage his ambitions, the Japanese arranged a visit for the UNRWA students to one of the most advanced hospitals in Tokyo, where they were briefed by Dr. Yasuyoshi Ouchi, the head of the hospital, and were given doctors uniforms. They also witnessed heart and brain surgeries. “I was happy at the hospital because of how close I felt to my dream,” recalled Mohammed. Photo credit: © 2015 UNRWA Photo.