Home » Newsroom » Features » What Teachers Can Do
Back to Newsroom

What Teachers Can Do 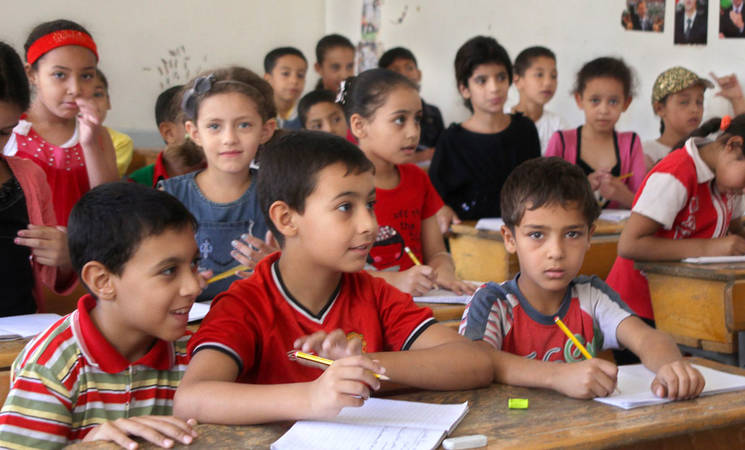 By January 2013, four United Nations Relief and Works Agency (UNRWA) schools in the Qabr Essit Palestine refugee camp, near Damascus, had been closed due to the ongoing conflict and violence in and around the camp. For Usama Tarboush, an UNRWA social studies teacher, the education of the local children was a major issue: “I was very concerned that the students could not go to school,” he says.

“Initially, I felt helpless, but my despair was quickly replaced by a sense of responsibility,” he continues. “I volunteered to help find safe locations for the students remaining in the camp to continue their coursework.”

The energy, devotion, and commitment that inspire a love for learning in his students drive Mr. Tarboush to teach, despite overwhelming challenges. Drawing on the strength of teachers like him, UNRWA is introducing innovations in its education programme to ensure that students affected by the conflict – whether still in Syria, or in Lebanon or Jordan – can keep up with their studies.

In Syria itself, for example, UNRWA negotiated with the Ministry of Education to obtain after-hours use of a government school near Qabr Essit. By word of mouth alone, attendance grew quickly.  “We used a table and chair on the street to register students. People were queuing up to enrol their children,” Mr. Tarboush recalls. Today, the afternoon shift at Al-Fattimiyeh School has 1,183 students. “I prefer the alternative classes rather than no school at all,” says student Rawan Mhawesh, 14, “but I look forward to the day when my school is reopened.”

Education in Emergencies (EiE), the Agency’s approach to adapting its education programme to the challenging conditions of conflict and displacement, has been supported in large part by the Instrument for Stability (IfS) of the European Union (EU). Under this approach, the Agency’s priorities are to ensure safe places to learn, provide self-learning materials, transmit lessons on the UNRWA satellite and YouTube channels, maximize attendance in summer learning classes and train staff in psychosocial support for children. Mr. Tarboush’s school has gone one step further, by organizing courses for parents in psychosocial support, health education and crisis management.

Taking stock, he feels a great sense of achievement: “My students are amazing. Overall, our school ranked high in the results of the national exam in May.  The students were so determined to do well despite the upheavals they have experienced.”

UNRWA takes great pride in the work of Usama Tarboush and his colleagues.  The 3,700 UNRWA staff in Syria are mostly teachers and health professionals, and they constitute the backbone of the Agency’s ability to continue to support the resilience of families and communities.

UNRWA is now using over 40 government schools partially to compensate for the loss of access to most of its 69 school buildings, which, before the conflict, housed 118 double-shift schools.  While most UNRWA schools are in areas too unsafe to gather children, some are also being used to house displaced Palestinians and Syrians.  Despite the ongoing conflict, UNRWA has managed to enroll some 41,000 of its full 67,000 student population in Syria;  a further 7,000 are now enrolled in Lebanon, and nearly 1,000 in Jordan.