Home » Newsroom » Features » Where the Cement meets the Sun: The Innovative Gardeners of Burj Barajneh
Back to Newsroom

Where the Cement meets the Sun: The Innovative Gardeners of Burj Barajneh Aromatic parsley, burgeoning red-leaf lettuce and fragrant, fresh mint – these are just a few of the herbs and vegetables flourishing in an organic rooftop garden in the most unlikely of places: Burj Barajneh camp in Beirut – one of the teeming Palestine refugee camps in Lebanon where some 18,000 people live in a tangle of crowded roads and tangled electricity wires, where water leakage, dampness and poor ventilation are common. Amidst this gloom, a ray of light and hope was planted in October 2018 through the entrepreneurial genius of Mariam Chaar, the head of Burj Barajneh Women’s Programme Centre and a Palestine refugee herself, in close cooperation with Ziad Abi Chaker, an environmental and industrial engineer of Cedar Environmental, a local research and development centre for environmental technologies.

The idea of growing your own organic ingredients comes as a complementary activity to Soufra, a wildly successful women’s catering company - also the brainchild of Chaar - that prepares and delivers home‐cooked traditional meals for homes, workplaces, and special events in the camps. Soufra, or ‘dining table’ in Arabic, works out of an UNRWA installation made available to the local Women’s Programme Centre in the camp, with which the Agency has a long-standing partnership.

The abundance of organic produce in this environment devoid of much green is tended by volunteers of the Burj Barajneh Girl’s Committee, a group supported by UNRWA to conduct community awareness around the prevention of gender-based violence (GBV). The girls receive a three-month training, after which they are tasked to take care of the rooftop garden and are able to fully partake in this sustainable agricultural plan. In this sense, this project has a significant social impact, beyond the environmental one.

“I am so delighted with this initiative. It is not only a source of income but also a great environmentally-friendly approach that helps use all possible spaces in this congested camp, including even the rooftops. It empowers and provides more opportunities for women,” observes Maha Hajjaj, a member of the Women’s Programme Center in Burj Barajneh and the kitchen manager at Soufra.

The rooftop garden consists of vertical planting structures built from discarded plastic bags and other so-called non-recyclable plastics and allows for the cultivation of 15 different types of vegetables which, in time, will meet 75 per cent of the requirements of Soufra. The “eco-planters”, as they are called, occupy very little space and allow for intensive crop production without the use of chemical fertilizers, herbicides, or pesticides. This innovative methodology allows not only for the production of organic produce, improving the general health and well-being of Palestine refugees, but also makes efficient use of space, which is in short supply in the  camp. 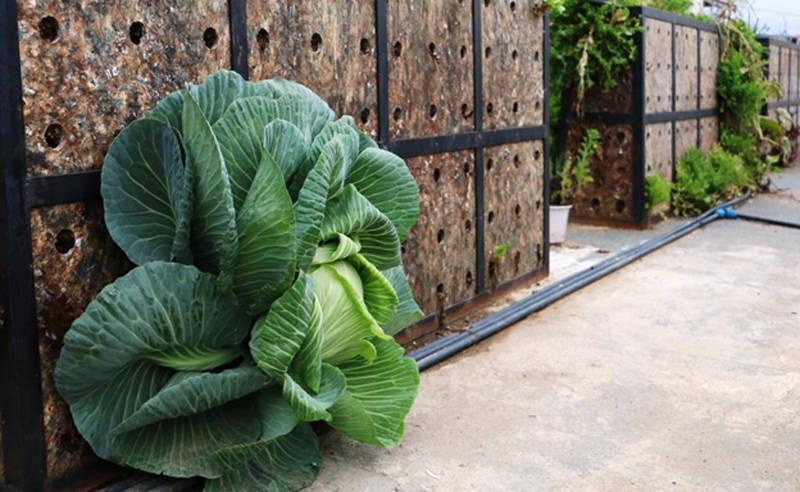 A giant cabbage head flourishes in the organic herb and vegetable garden on top of an UNRWA installation in the Burj Barajneh Palestine refugee camp near Beirut, Lebanon. © 2019 UNRWA Photo by Rabie Akel

While much of the work of the Women’s Programme Centres focuses on spreading awareness around child marriage and the prevention of GBV inside the refugee camp, the centres also provide education, vocation skills training and micro loans to women in the camps, in partnership with UNRWA, to help create job opportunities now and in future and, thus, greatly contribute to the empowerment of women and girls.