Home » Newsroom » Features » Why We Are Opening Our Schools On Time?
Back to Newsroom

Why We Are Opening Our Schools On Time? 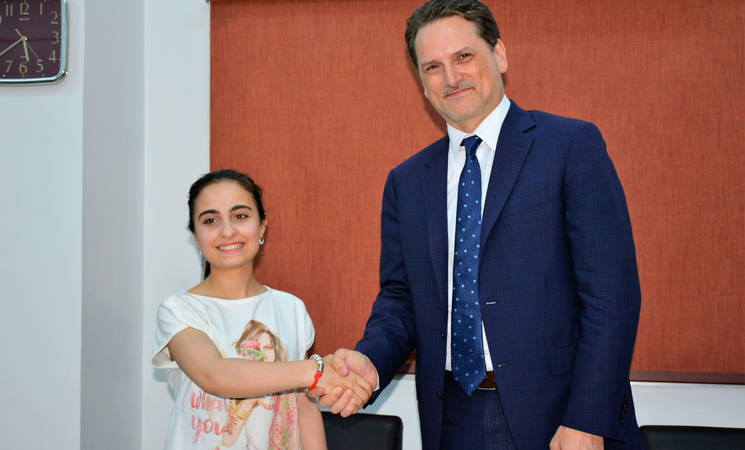 Last month, I met a remarkable UNRWA student named Aya Abbas. The 9th grader from Yarmouk refugee camp outside Damascus was the highest scoring student across Syria. Despite the extraordinary adversities she faced as a Palestine refugee child, including forced displacement from the camp where she was born and raised, she outperformed her peers in all subjects. Her courage and determination exemplify the commitment of 526’000 students at our 711 schools in Syria, Jordan, Lebanon, Gaza and West Bank (including East Jerusalem).

It was because of students like Aya that I decided to open our schools on time this week, notwithstanding a shortfall of over 200 million USD— an unprecedented deficit in UNRWA’s 70-year history. Many people expressed deep satisfaction for what they considered a courageous decision. However, the real heroes who deserve our solidarity are the half a million students in our schools whose faith in UNRWA—and by extension the international community---remains unwavering, despite repeated uncertainty and the absence of political horizon. Their courage should be celebrated by the world.

In recognition of that faith, and to pay tribute to the many donors who either significantly increased or advanced their contributions this year, we are opening our schools to celebrate one of the most successful human development programs in the Middle East. For decades, donors have recognized that UNRWA is a force multiplier for stability in one of the most the volatile regions around the world. Moreover, the prospect of over half a million students not attending schools was deeply unsettling for the host countries who have generously welcomed hundreds of thousands of refugees for decades.

As we deservedly celebrate the opening of our schools on time, however, we must not lose sight of the fact that we are still facing severe and crippling financial crises. The year began with the regrettable decision by the US Administration to cut 300 million USD from its planned annual contribution to our budget, adding to a pre-existing deficit of 146 million USD.

To overcome the existential threat we faced as a result of the steep funding gap, we launched the “Dignity Is Priceless” global fundraising campaign in January with the goal of opening new funding pathways and raising awareness about the plight of Palestine refugees. Fortunately, we mobilized about 238 million USD since the beginning of the year. While we were encouraged by the strong solidarity from the international community, including new donors, we still need 217 million USD to keep our schools open until the end of the year. That will require further decisive collective action by the international community whose mandate we are dutifully implementing.

Nearly 70 years after the UN General Assembly established UNRWA, the agency remains an enduring expression of the collective will of the international community. We have successfully helped generations of Palestine refugees realize their human potential by giving them much-needed grounding in education. Many of our alumni are celebrated entrepreneurs, scholars and leaders in their community.

Nothing has impressed me more since joining UNRWA as Commissioner-General in March 2014, than the passion with which UNRWA students pursue their education. It is inconceivable for me to face half a million students and their parents and tell them that their education is too expensive for the world. Similarly, we do not have the luxury of opening half of our schools or closing half of our almost 150 clinics. I continue to strongly believe that, together we can and must protect the dignity and human security of Palestine refugees.

Refugees like Aya Abbas are not defined by their enduring displacement but by their sheer determination to realize their full human potential. And as she and many others have proven over the years, Palestine refugees are one of the most industrious people around the world if they are given the necessary tools and opportunities. Time and again, they demonstrated their extraordinary attachment to the quality education and other vital services we provide.

We must not let half a million students like Aya down. And we cannot wish them away either. Palestine refugees have been told to have a faith in peace processes until “a just and lasting solution” is found to their plight. Decades later, they have neither justice nor a lasting solution.

The international community has a moral responsibility to sustain vital services such as education and health for Palestine refugees until the political conflict is settled. Because dignity is priceless.