Home » Newsroom » Features » By women, for women: UNRWA trains female staff to be safe in the field
Back to Newsroom

By women, for women: UNRWA trains female staff to be safe in the field 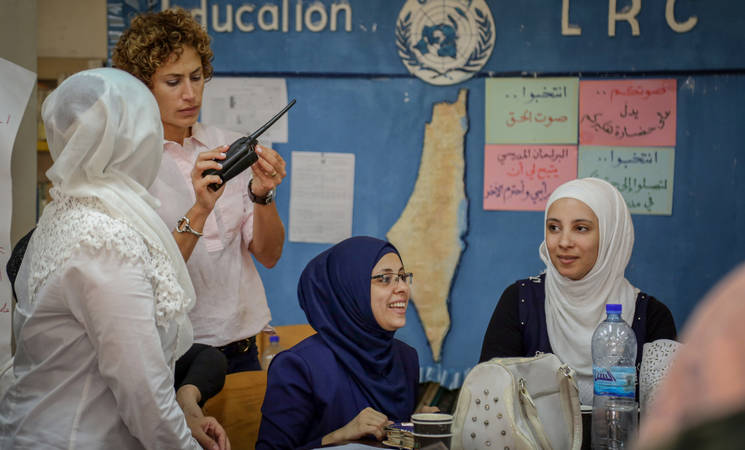 “Uniform – November – Romeo – Whisky – Alfa,” Elsie Abdallah calls into the small black radio in her hand.  “What am I spelling?” she asks the group of 30 women gathered in Neirab camp, near Aleppo, Syria. The women try to figure it out, using the phonetic alphabet projected on a screen in the front of the training room. A few seconds later, several call out, “UNRWA!”

This is common scene during the Agency’s Women Security Awareness Training session. The one-day course is taught by women, for women.  “Women are subject to a higher rate of safety incidents,” explains Elsie Abdallah, Head of UNRWA Security in Syria, who conducts the training. “UNRWA policy on gender equality affirms the Agency’s commitment to gender equality and the empowerment of women and girls. That being said, women are more exposed to risk of violence based on their gender. The Field Security and Risk Management (FSRM) team in Syria works hard to ensure that UNRWA provides gender sensitive, appropriate and effective responses and security measures to manage these risks. Our team aims to enable our female colleagues to participate fully in the workforce whilst feeling empowered, safe and secure.”

Women comprise over 50 per cent of the UNRWA workforce in Syria and FSRM aims to train some 400 of them over the next year. The training course will cover many facets of public safety and will include operations in the field, how to act at a checkpoint, how to plan a mission, how to operate a VHF radio, safer travel for women, sexual harassment, as well as survival as a female hostage.

The fact that the training is for women by women creates a safe environment where the group feels free to express themselves and share their experiences without reservation. There were many emotional moments during the Aleppo training session. Some participants recalled being held at checkpoints and pleading to be let through with food for their children. A video aired to prepare attendees on how to deal with a hostage situation brought many to tears. Most of the women have lost loved ones due to the conflict in Syria. “We shared, not only how we suffered, but also how we responded, how to be resilient and how overcome these experiences,” says Mervat Aburashed, Chief of the North Area, Syria. “We learn from one another.”

“A big part is women sharing their experiences. I am here mainly to facilitate the exchange of experiences and reframe it. The knowledge is already in the room,” Abdallah says. “The goal is not to tell women what to do and not to do; rather, the goal is to empower women and enable them to make the best decisions possible in moments of emergency.” 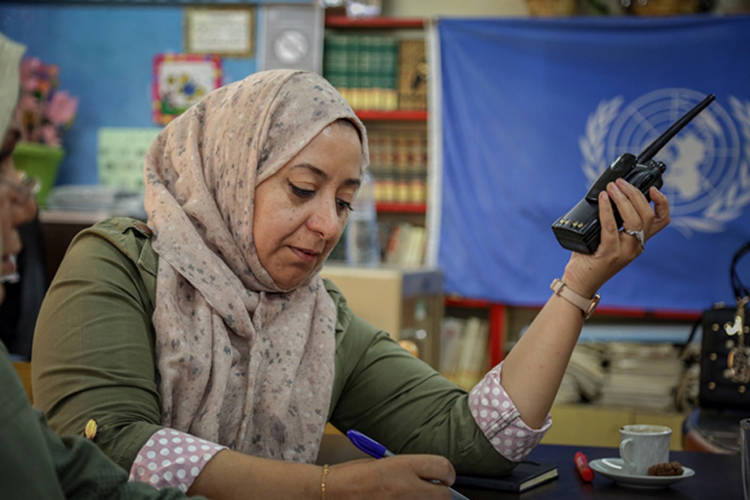 “We shared, not only how we suffered, but how we responded, how to be resilient, and overcome these experiences,” says Mervat Abu Rashed, chief of the North area in Syria © 2018 UNRWA Photo by Ahmad Abu Zeid

“We shared, not only how we suffered, but how we responded, how to be resilient, and overcome these experiences,” says Mervat Abu Rashed, chief of the North area in Syria  © 2018 UNRWA Photo by Ahmad Abu Zeid

The day ends with some self-defense; a quick demonstration of pressure points and release techniques to, “Reassure women that physical strength is not the only means to get ourselves out of a situation,” Abdallah says. For many of the participants, this was a highlight. “I tried the new technique out on one of my security guards!” says Aburashed, laughing when she recalled the experience. She wasn’t successful at tackling him at her first attempt, but is now thinking about attending further self-defense training.  “It has shown me that you don’t need to be strong, you just need to know how to react.”

The women also addressed a taboo subject, sexual harassment. “The most useful thing I learned is how to react to harassment; it was a new subject for me,” says Hanan Fayad, an UNRWA schoolteacher. One of the goals of this training course is for women to transmit these lessons, including women who are not at fault when an assault takes place, to other women in their communities. Participants said they would transfer their acquired security knowledge and awareness to their daughters, cousins, friends, and students. "As a school teacher, I feel that I have to do mainstreaming session to transmit what I learned during the training to my students,” Fayad said.

The Government of Japan is a generous contributor to this security awareness-training course.