Working with youth and communities to combat gender-based violence 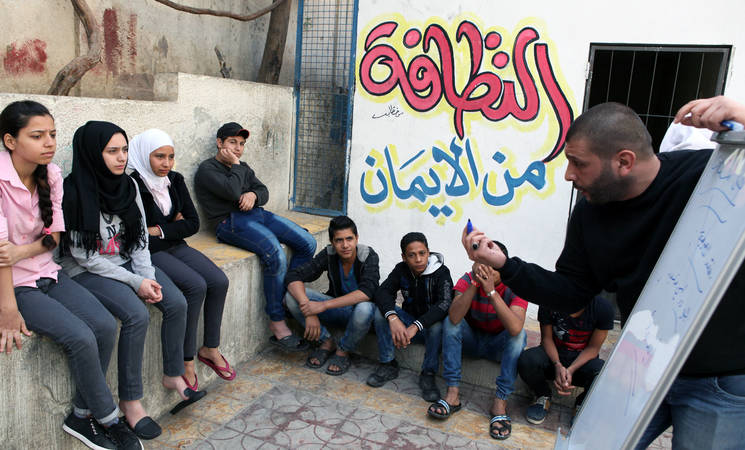 It is Wednesday morning in the Haifa School Collective Centre, an UNRWA shelter located in Damascus which currently houses 212 displaced Palestine refugee families, comprising 325 individuals (as of October 2016).  A group of young Palestine refugee boys and girls gather in a corner of the schoolyard. Mohammad, a 32-year-old UNRWA volunteer, greets everyone who has come to attend the support group that is about to start.

The group discussions are one way to engage youth in identifying risks and concerns about gender-based violence (GBV) in their community and reflect on strategies to address them. “Unfortunately, it is really necessary to discuss this theme here in the community,” Mohammad explains, while writing on the portable whiteboard in preparation for one of the sessions.

Mohammad is a resident of the shelter who has also been working as a facilitator of the shelter’s community support group. He creates the space for developing community-based protection strategies, which means working with community members to identify challenges and problems around safety and explore ways to address them. This approach recognizes that some GBV-related problems, such as domestic violence and child marriage, are rooted in social norms that can only be transformed from within the community.  The group discussion provides an opportunity for communities to critically reflect on these issues and on their role in preventing such violence.

Mohammad has received trainings on addressing gender-based violence and is supported by an UNRWA social worker who advises him on ways to engage boys and girls of different ages. The session starts and Mohammad encourages the participants to describe their frustrations and experiences. He then leads the group to start identifying strategies to attend to the needs of the community.

Mohammad highlights one of the core elements of his work that he does with the community: “By having an open dialogue with the community, we increase awareness on the effects and consequences of gender-based violence. We also engage men and boys to be allies and agents of change. We engage them to be part of the solution.”

Mohammad’s work is vital in the context of Syria. Since the outbreak of the crisis, mass internal displacement affecting hundreds of thousands and the highly volatile nature of the conflict have created conditions in which women and children, both girls and boys, are increasingly at risk of GBV.

Mohammad and other volunteers lead these sessions in different collective shelters throughout Syria on an ongoing basis. Mohammad takes pride in contributing to changing the causes and perpetration of gender-based violence: “People used to think it was normal to harass women. It is great to serve the community by volunteering with UNRWA and by engaging the community to put a halt to these practices.”

The safe spaces are part of a two-year project implemented by UNRWA. The project, ‘Building Safety: Mainstreaming GBV Intervention in Emergency Preparedness, Prevention and Response,’ has been developed and funded by the US Department of State’s Bureau of Population, Refugees, and Migration, within the context of the U.S. government’s ‘Safe from the Start’ initiative.  This US initiative is an effort to change the way that organizations and UN agencies address GBV in humanitarian contexts. The initiative funds projects like this one to address violence against women and girls and systematically prioritize GBV in emergencies.

According to the IASC GBV Guidelines, GBV is an umbrella term for any harmful act that is perpetrated against a person’s will and that is based on socially ascribed differences between males and females. GBV can occur in both private and public spheres, meaning that it can be perpetrated in the home by family members (e.g. domestic violence) as well as by those outside of the family, such as neighbors, co-workers, strangers, community leaders, etc. Whereas the main causes of GBV are rooted in gender inequality and discrimination, risks of GBV are exacerbated during emergencies as a result of the erosion of protective structures and community cohesion, thus increasing both vulnerabilities and risks for women and girls. It is within this context that GBV must be understood as a life-threatening protection issue that needs to be taken into account and prioritized from the onset of a crisis.